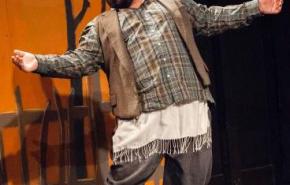 Michael Harris is an actor, improviser, writer, and teaching artist. A member of Actors' Equity & SAG-AFTRA, he has performed locally at the Creative Alliance, Kennedy Center, Studio Theater, Centerstage and Signature Theater amongst others. Roles played include Tevye, Falstaff, Hamlet and Bottom.  He wrote the sketch shows "Prayer Ain't Nothin' But Talkin'" and "Too Hip for the Room," the latter premiered at the Charm City  Fringe Festival.  Michael performed in the regional... more
View Michael's Resume

The Siegfried Olsson Band (We're not technically a band)

The Sigfried Olsson Band is a sketch duo created by myself and Zach Brewster-Geisz. Over the course of three years we shot two seasons of sketches and short films with actors from all over the Baltimore/DC area. We also pur together a live performance called, "Too Hip for the Room," as part of the 2018 Charm City Fringe Festival. The included sketches range from a Fitbit for your Sex life to a sitcom featuring Death to the struggles of a Telenovella actor who is addicted to churros.

Over the course of 8 years, I performed in an improv Comedy duo with Prescott Gaylord called Evan the Loyal. We began by doing shows where we would find an audience member who had never performed improv or even taken a class, and then we would do the entire show with them. We experimented with a variety of formats including: Wordy & Wordless (Only one of us could talk for the whole set), Wordless (entirely mimed/clowned shows), and doing Music based shows with guitarist, Luke Chohany. Evan the Loyal was an invited troupe at the Chicago Improv Festival (2x), Duofest in Philadelphia (5x), the District Improv Festival in DC (4x), the New York Improv Festival, and Austin Improv Festival, as well as annual performances at the Baltimore Improv Festival.

Too Hip for the Room

A sketch show produced under the Siegfried Olsson Band name for the 2018 Charm City Fringe Festival. Performances included Baltimore area improviser/actors Ti Coleman, Alex Hewitt & Kelly Lloyd. The show combined stage adaptations of some of our short filmed sketches, sketches written for previous shows, and new material. Too Hip for the Room covered topics from Proper Barbecue to Love Between Football Coaches to the Limits of Deathbed Requests.

Sarge Says Farewell was the first piece written and has been performed in multiple shows in DC and Baltimore as well as being recorded by The Siegfried Olsson Band (see Work Samples). Sunset was first performed at a Valentine's Day Sketch show by the Baltimore Improv Group (BIG). I also included the scripts for several of the sketches in the show including Halftime Motivational Speech, Anti-Semetic Chicken and the Moloch Medical Group.

This show began as an mostly improvised, full length version of A Christmas Carol, and was performed several times in Baltimore as well as at comedy clubs in DC and Arlington. I have since written a mostly scripted version of the show as well. The scripted version was first presented at Page to Stage at the Kennedy Center.

In Bah Humbug the audience is treated as a focus group for a new reboot of the Dickens' classic. In the mostly improvised version, the audience chooses almost every detail of the show: the location, Scrooge's business, celebrities who play the Ghosts, Tiny Tim's illness even a replacement phrase for "Bah Humbug".

In the scripted version, Scrooge is running a pet psychiatrist scam in Miami after having lost his beloved Emily and their dream of being professional wrestlers. The ghosts include a condescending Queen Victorian and a drunk and lecherous Charles Dickens.

I have included samples from both the primarily improvised and primarily scripted versions of this show.

During my time in the Baltimore Arts (and particuarly Improv) Scene, I have had the good fortune to collaborate with a number of artists in a variety of disciplines. I created the Election Night Extravaganza & Anyone Can Draw Formats with Baltimore Sun/Economist cartoonist, Kevin "KAL" Kallaugher and we performed both shows multiple times at the Creative Alliance. I created Improvised versions of Law & Order, Shakespeare plays, and Public Television Fundraisers, amongst other formats. I directed several productions of The Movement, a hybrid show with dance troupe, the Collective and helped produce and performed in Skinesthesia with body painter, Patricia Tamariz and a music based show with Beatbox legend, Shodekeh.

Unfortunately, after a purging of the BIG YouTube channel by current administration, most of the videos of these performances have been lost. I have included the original Skinesthesia show, the commercial we created for the first Election Night Extravaganza, and the structure for the Law & Order Improv Format.