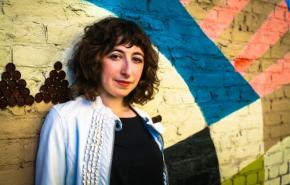 Baltimore singer/songwriter, producer, poet, & multi-instrumentalist Abby Becker’s projects range from indie rock to cinematic chamber to avant garde theatrics. She credits her musical adventures to a diverse and unique musical childhood, one informed by the square dances and old-time music of her native West Virginia, her father’s professional experience with both Debussy and Chicago Blues, and her upbringing in community theater, including the radical Yiddish theater tradition. A classically... more
View Abby's Resume

Cora Sone is a light heavy band from Baltimore. The trio features singer-songwriter Abby Becker on guitar, Patrick McMinn on modular synth, bass and keys, and Sam Balcom on drums. They achieve a dreamy, glitched out, stuttering, and utterly unique sound by sending Becker’s lead vocals through the modular synth. The band started with a question: what happens when two people are playing one instrument at the same time? The result is a perennial sound experiment, a playful dialogue where nobody knows what’s going to happen next. This essential sense of possibility and disruption serves as a vehicle for songs about imminence, the ethics of love, and heartbreak in the face of the every day world. Cora Sone has appeared with lauded Baltimore artists including Eze Jackson, War on Women, Wume, and Haint Blue.

In November 2019, I produced and performed in a remount of the Talkings Heads classic 1983 concert film Stop Making Sense. With a core band, a different lead singer on each song, horn section, lights, projections, film, and staging this ambitious, two night show was not so much a restaging as a performance art piece. I put my heart into producing this show and was deeply involved in casting, artistic direction, promotion, and performance. It was my priority to cast a lineup that brought an unlikely, powerful group together and honor those artists by encouraging them to make the performance their own. Our team included rappers, punks, and Peabody grads, as well as dancers and theater techs. We sold out the Ottobar, raised over $4,000 for The Baltimore Harm Reduction Society, and produced a show BmoreArt called “a booster shot” for the city.

The first ever Baltimore Mixtape Music and Arts Festival took place, May 4th - 5th, 2019 in Station North. This event, featuring over 60 acts, almost every single one of which is from Baltimore City and represented a glimpse into the rich diversity of musical genres and artistry our city has to offer. From hip hop to punk to country, we brought them together in a curated, mind blowing single weekend of celebration and inspiration. This was our love letter to the city; it's our way of holding up our community to say we are worthwhile. After the city shuttered, threatened, and drove the DIY world in Baltimore so far underground that we were effectively silenced, a lot of us wondered if that era was over. Even though I've been playing music in the city for years, I can't pretend to claim a particular scene as mine. But I was asked by a couple of friends who wanted to show that energy, that something-from-nothing spirit that is still thriving in the city and I said yes. I was deeply involved in booking and curating the diverse lineup, developing the concept, managing meetings and the production team, press (I wrote the copy, mission/vision, and press release for the festival), promotions, budgeting, permits / licensing, interfacing with venues, ticketing, logistics, stage managing, and performing. We managed to pay every single artist who took a risk playing this first-year event (despite heavy rain the second day) and year two is currently in the works.

Fondly known as every puppet's favorite band, Trucker Talk started as the house band for the episodic puppet show "The Motherload" and has gone on to score an international award-winning short film, collaborate with Light City artists large scale installations, and even play music without puppets. Loosely styled as an experimental chamber group or "chamber transport" Trucker Talk is the product of four fiersome artists having way too much fun. Our members are Jessica Keyes (saxophone/flute/synth), Greg Bowen (drums/keys at the same time), Rich Kolm (bass and yips) and Abby Becker (violin/vocal effects/vibraslap). Our original album Dreams and Nightmares, the story of a single night's sleep, is forthcoming.