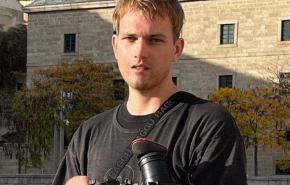 Synopsis: Jodiiie has been quarantined in a cluttered, communal warehouse on the edge of a post-industrial city. She is trying out a new, VR-guided meditation game called “Your Final Meditation” in an attempt to calm her anxieties. Each of the 12 levels of the game is a different world seen in first-person POV experienced through a VR headset. Jodiiie becomes increasingly consumed by the game as the meditation descends into a maze of real, virtual, and hybrid worlds. Ultimately, Jodiiie must transcend the game itself.

Project Info: “Your Final Meditation” is an experimental film that explores spirituality, technology, and identity. Drawing on the format of niche YouTube genres, a series of guided visual meditations become a means for exploring the body’s relationship to the camera and our virtual selves. The film's collaged approach includes scripted live action scenes, 3D animation, body-mounted camera performances, AI-generated images, nature documentation, and video game screen captures to build a hyper-real world that reflects our current moment in all its horror and humor. Filmed at The Floristree in the now closed H&H Building in Seton Hill. An integral part of the Baltimore DIY scene of 2010’s and one of the last true artist run spaces in the city. The building was recently sold and tenants evicted so the building can be converted to high end lofts. Using furniture, objects, and plants we constructed Jodiiie’s fictional bedroom. Weaving the history and present reality of the Baltimore art scene into the film we sought to pay homage to the past and document the space once more before it’s gone.

Synopsis: A YouTube Yoga tutorial.  A collapsed body. An expanded view. "My Expanded View" uses the format of a YouTube yoga tutorial and its collapse as a basis for exploration of  new age spirituality, domestic surveillance, and camera technologies. How do we document the body and who is doing the documenting?

Project Info: Commissioned by Adult Swim for an episode of "Off the Air" curated by Baltimore based performance group Wham City Comedy. My Expanded View premiered at the 2018 Maryland Film Festival alongside a public group meditation event organized by artists involved the film. The event featured a meditation on the history of technology & spirituality, an installation of paintings on fabric, a cocktail bar, and live permformances by two Baltimore based experimental musicians, John Jones & Aimee Lin. It had it's International Premiere at the Locarno Film Festival in August 2018.

"[My Expanded View] should be labelled as a tutorial on shooting in the age of digital cinema. Hughes delivers a masterclass on using tools such as drones, iPads, Osmo cameras, thermal cameras, and what-not, to expand our views on how images can be created today."
- Locarno Film Festival

Synopsis: “Woke Me” re-creates the feeling of wandering through a party late at night, thinking about other things, and then being brought back and grounded into the present moment by the people around you. It’s a celebration of the dancers, performers, artists, and musicians in Baltimore and the collaborative creative energy of the city. Featuring many faces familiar to the Baltimore music scene including Eze Jackson, Abdu Ali, Pangelica, & EN'B. Filmed at the artist run space The Compound.

"The Corey Hughes-directed visual for “Woke Me” is like a dream state event set in an opulent ballroom of enchantment and wonderment. Captured and curated before the lockdown; the audience is invited to join some of Baltimore’s best and brightest stars that are criminally underrepresented in both — and outside of their home digs. A contemporary viewing of the video feels like entering a vision world of an alternate and inclusive new realities of togetherness and camaraderie"
- Week in Pop

Synopsis: The internet in Cuba is very slow. Movies, television, and information are exchanged through a black market system of media distribution via external hard drives known as “el paquete semanal.” Shot over the course of a day in the town of San Antonio de los Baños, the film combines narrative, documentary, and experimental elements to create, like the paquete itself, new images and new connections between distant and unseen forces. A meditation on the flow of data and the search for human connection in a groundless world.

Project Info: Armageddon 2 is an experimental narrative short film produced during Black Factory Cinema's Filmmaking in Cuba workshop taught by Werner Herzog in San Antonio de los Baños, Cuba. The film was selected by Herzog as one of the top ten films from the workshop and received international festival distribution through Black Factory Cinema. The film premiered at the Locarno Film Festival where it was awarded the Pardi di Domani Special Jury Mention Award. The film was included in the short film compilation Eyeslicer Season 2 and released online via NoBudge. It was released in a limited edition of physical USB Hats designed in collaboration with visual artist Michelle Uckotter.

"Hughes achieves a fragment of today's Cuba from a story with a lot of humor, where its value and originality lies in how this character allows himself to be observed and admired. A USB necklace as a door to happiness. A bunch of bananas as a banner of a transaction. A computer screen where five windows are seen at the same time. A different vision on new brotherhoods fostered by the territory of the virtual."
- Monica Delgado, DesistFilm

Synopsis: In a world that undulates between fact and fiction, digital and physical, a group of SoundCloud rappers lives a solitary, post-societal existence in the desert town of Crestone, Colorado. Once a religious and spiritual mecca for many, Crestone’s endless sand dunes, waterfalls, and dark caves act as a backdrop for images of tattooed bodies, cosplay wardrobes, and clouds of weed smoke. "Crestone" explores the often hidden aspects of collaboration and friendship as well as the human desire to persist against all odds. What does music sound like if there is no one left to repost and share it?

“REMINISCENT OF HARMONY KORINE’S GUMMO... CAPTURES CRUDE MOMENTS OF AN EXAGGERATED REALITY AND REFLECTS HUMANITY IN THE SOULS OF THE LOST AND BIZARRE.” - Fiona Murphy, VOX MAGAZINE

Synopsis/Project Info: Documentation of a figure skating routine choreographed to the track "People's Park" by Horse Lords. The camera was mounted to an Easy rig and operated by an ice skating Corey Hughes. Having the camera handheld on the ice allowed for more dynamic and energetic camera movement, closely following and reacting to the figure skater's movements. Digital zooms and re-positioning were created in post-production to add a digital element that counters the filmic texture of the images.

Filmed at THE GARDENS ICE HOUSE in Laurel, Maryland.

Synopsis: A Florida man (known only by his YouTube username: DeerPro42) records an unboxing video for Vibram Five Finger Toe Shoes. After a vision from a mysterious CGI camera operator, he travels to the Florida keys by hoverboard. As his unboxing video continues his attention shifts from the product to himself. A crisis on the beach. An eye in the sky. The unboxer unboxed.

Project Info: "MyToeShoes.Com" is the second film in a series that focuses on popular YouTube genres as creation sites for new types of performative avatars. Filmed with a variety of different cameras (aerial drone, head mounted GoPro's, 360 camera on selfie stick, screen recordings, CGI, cinema camera), the film explores a world in which each person is both watching and being watched, filming and being filmed. The project was filmed by a three person cast/crew over the course of a week travelling from Miami to the Florida Keys in a minivan.

"In Hughes imagination, the drab format becomes a macrocosmic journey documented with GoPros, 360 degree cameras, Google Maps views and beyond. As the unboxer tests out his new toe shoes with regard to comfortability, water resistance, and speed, he’s led into the unknown by a mysterious automated voice. Hughes has established himself as one of our preeminent experimental filmmakers"
- NoBudge

Project Info: Visuals for "Did Dat," a track off of Baltimore-based performer Abdu Ali's 2016 Album MONGO. Filmed at the former artist-run space THE BELL FOUNDRY in Baltimore, Maryland. "Did Dat" premiered online via THE FADER.

Synopsis: Remake of the 1999 Robin Williams feature film comedy “Bicentennial Man,” starring Marcelline as “Nam Nam,” a robot who wanders the earth for two hundred years trying to become human so they can die. The film, shot entirely on an aerial drone camera, mimics the visual aesthetic of Hollywood films while subverting it's imagery with sharp robotic turns.

Project Info: A collaborative film project by video artist Beau Vasseur, performance artist Marcelline, and filmmaker Corey Hughes. The project was shot in 4 sections, corresponding to the seasons, over the course of a year with an alternating crew of artists, filmmakers, and performers. Each section of the film has an original score composed by a different musician (Will Schorre, Sneaks, Jared Brown, & Nerftoss).

Screenings: 200 Nam Nam premiered at the Borscht Corp Film Festival in Miami, Florida and was screened in Baltimore at Open Space's PMF VIII Launch Party at The Crown. It participated in the MACAO MILANO's Nocturnal Reflections Screening Series in 2018 and was released on the BMA Virtual Screening Room in 2020.

Synopsis: A slapstick comedy in super slow motion. An unnamed tourist with a leg injury searches for physical and spiritual healing on a week long Carnival cruise vacation from Baltimore to the Bahamas. Floating between narrative, documentary, and experimental tendencies the film creates an atmosphere similar to that of being on the ship itself, weightlessly and nauseously gliding through surreal and absurd environments.

Project Info: Filmed with a 3 person cast/crew on a week long Carnival cruise. Ouchiemongo premiered at a free screening event held at the Baltimore performance space Floristree in 2015. The event included works by Baltimore artists, a tropical cocktail bar, and a performance by the "Official Steel Drum Band of Baltimore." The screening was named as a Top 20 Art Moment of 2015 by BmoreArt. The film premiered online via NoBudge and was awarded a 2016 NoBudge award for "Best Experimental Film."