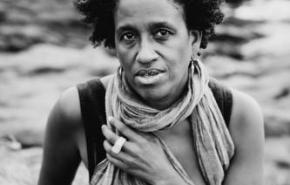 Pamela is the writer, director, and producer of the immersive-media experience, which is co-produced by her octogenarian mother Sadie Woolford. Up/Rooted includes 3D modeling by Philip Mallory Jones and original music by Paula Richardson and John Richardson. The show is made possible in part with support from Maryland State Arts Council and DC Commission on the Arts & Humanities. For more information on the show, visit pamelawoolford.com/uprooted. To be notified of the show's opening, join Pamela's email list.

Disrupt/ed (a mem-noir) is an upcoming Pamela Woolford memoir with drawings by nationally syndicated Black-American editorial cartoonist Walt Carr. With the tagline "A Black woman’s memory of her childhood confidence and the racist tide she swam against in suburban 1970s America," Disrupt/ed is a race-based childhood memoir in vignettes. In the book Pamela Woolford explores her early childhood in the 1970s in the planned integrated town of Columbia, Maryland, amidst this nation's legacy of enslavement of Black people, like her.

mem-noir: [mem-nwär] NOUN, A memoir, written in short paragraphs or verse, concerned with being a person of the Black race within the context of a specified subject, time period, or circumstance. Visual art or photographs, especially biographical in nature, are often incorporated.

Disrupt/ed is supported in part by a grant from the Maryland State Arts Council. For more information about Disrupt/ed (a mem-noir), visit pamelawoolford.com/disrupted.

Interrupted: Prologue to a Mem-Noir

Interrupted: Prologue to a Mem-noir, a memoir short about anti-Blackness in America, is Pamela Woolford's latest film release in which she is the writer, director, editor, and sole performer. Originally scheduled to premiere at a 2020 solo show of her work at Joan Hisaoka Healing Arts Gallery, the film has had a limited on-demand run (after the postponing of her gallery show to 2022 due to to the pandemic). In collaboration with Busboys and Poets and the Carter School for Peace and Conflict Resolution at George Mason University, Woolford hosted an online film-premiere event, Art as a Response to Anti-Blackness, which was attended by 1.5 thousand people. The film also screened through Marymount University later that year and was the subject of Woolford's 2020 Bisson Lecture in the Humanities there. For more information about Interrupted: Prologue to a Mem-Noir, please visit mem-noir.com.

Interrupted: Prologue to a Mem-noir was made possible in part thanks to the support of Maryland State Arts Council, United Way of Central Maryland, Mosaic Center for Culture and Diversity at University of Maryland Baltimore County, Leah Mazur and Drew Willard, Bob James, and Resonance Records.

Pamela Woolford’s love of storytelling began in childhood, listening to her mother’s stories of growing up in rural North Carolina in the '30s, '40s, and ‘50s. It is these tales, decades after Woolford first hears them, that inspire her to write her short story “Just After Supper” and create the character Mable as an homage to her mom. “Just After Supper” appears in the literary publication Origins Journal. It was nominated for a 2018 Pushcart Prize by novelist and Pushcart Prize editor Mark Wisniewski. Woolford adapted the story to create the script for her multi-award-winning experimental film Generation.

When Generation was released it received extensive news coverage, including the cover story for Her Mind magazine.

Pamela Woolford performs live readings in character and voiceover work. Examples of each can be viewed by clicking the boxes shown. In addition, Woolford is the primary onscreen talent, performing both acting and movement-based art, in her multi-award-winning film Generation (see separate Generation project description), the sole voice actor in Generation, the sole performer in her critically acclaimed film Interrupted (see separate Interrupted project description), and the sole voice actor in her virtual-reality experience Up/Rooted (see separate Up/Rooted project description.) Trained in dance, theater, and voice performance, Pamela Woolford's performance career began in the early 1990s as a dancer in Aurora Dance Company then in residence at Howard Community College in Columbia, Maryland. She went on to perform with the Middle Eastern dance company Mianaja Oriental Danse Ensemble. Then she began performing as a solo dancer in concerts and at festivals, dancing her own solo fusion choreography and choreography  by others, including renowned world-fusion choreographer Dalia Carella. In the early 2000s, she began performing voiceovers, including PSAs and for professional theater.

Meditations on a Marriage: A Memoir of Our Year and a Half

Meditations on a Marriage: A Memoir of Our Year and a Half is Pamela Woolford's marriage-memoir collection, a group of essays about her tumultuous relationship with her composer husband, who was emotionally abusive and showed signs of mental illness. Woolford was a 2016 Tucson Festival of Books Literary Awards finalist and shortlisted for the 2017 Fish Publishing Short Memoir Prize for collection excerpts. Two excerpts from Meditations on a Marriage are published in Eunoia Review: "Coffee" and "Dog." About  Meditations on a Marriage, Pamela Woolford says, "Six months into my marriage to my composer (now ex-) husband, he, out of the blue, berated me for taking a break while writing an email he asked me to write as a favor. I was astonished and confused. Six months after that I had the thought that he might kill me. His escalating verbal assaults and mental abuse left me with that much fear. Yet even after he drove me out of our home on New Year's Day 2015 with two days of back-to-back rages, what I wanted more than anything was to have the man I fell in love with back. After little more than a year with him, I had become someone I didn't recognize. I was 46 when we married, and it was my first marriage partially because I am cautious, logical, and independent. How did this happen to me? Verbal and mental abuse are insidious in the way they slowly turn a person inside out, in my case making me question my own logic and intuition and long for the man who was actually abusing me. Meditations on a Marriage is about the love I shared with a fellow artist, my surprising but not atypical reaction to his abuse and manipulation, and his psychological challenges,  as he exhibited signs of having a personality disorder."

In addition to Disrupt/ed and Meditations on a Marriage (described in their own individual project descriptions), Pamela Woolford has published creative nonfiction extensively, including more than 100 memoir, profile, human-interest, literary journalism, and think pieces published in The Baltimore Sun, Poets & Writers Magazine, NAACP's Crisis Magazine, Harvard University’s Transition, and other publications. Her writings have been selected for anthologies, translated into German, and widely cited. Woolford has been a She Writes Press and SparkPress STEP Contest finalist for a memoir, a Tucson Festival of Books Literary Awards finalist for creative nonfiction, and shortlisted for the Fish Publishing Short Memoir Prize. Here are some links and descriptions of some of her online pieces:

In addition to the book  Antoine and Me, described in the Up/Rooted project description above and “Just After Supper,”  published in Origins Journal and described in the Generation project description above, Pamela Woolford has written much more fiction and has been a Maryland State Arts Council Individual Artist Award winner for fiction, a two-time Pushcart Prize nominee, and a Rick DeMarinis Short Fiction Contest semifinalist at Cutthroat, A Journal of the Arts.  To find out more about Woolford's fiction writing, click the various links on the right.

Pamela Woolford is a speaker and keynote storyteller amplifing the histories, memories, joys, and inner lives of Black women and girls and others whose voices are under-explored in American media, popular art, and experimental spaces. Since the start of the pandemic in 2020, she has been the Bisson Lecturer in the Humanities at Marymount University; delivered a keynote address for a TogetHER Women's Forum session sponsored by United Way of Central Maryand; curated and headlined the program Art as a Response to Anti-Blackness, which was attended virtually by 1.5 thousand people; presented memoir-in-verse for Artists U SHIFT; and performed a dramatic reading for the Baker Artist Awards showcase. For more information about Woolford's work as a speaker and presenter/performer, including clips from her presentations, visit: pamelawoolford.com/speaker.

Pamela Woolford has conducted interviews and profiles with noted figures in arts, culture, scholarship, and science since the early 1990s for Poets & Writers Magazine, the NAACP's Crisis Magazine, Harvard University's Transition,  and other publications, including her widely cited interview with filmmaker Haile Gerima "Filming Slavery," which appeared in Issue #64 of Transition.

Woolford's interview work has been cited in, for example, books such as: