"Behold the vocal power of Britt Olsen-Ecker and Melissa Wimbish." (Baltimore Magazine) Led by Olsen-Ecker and Wimbish, both classically-trained musicians, Outcalls creates genre-defying music that counters the tired narratives pervading much of today’s popular songs. "Get To You," their upcoming single, will appear on the soundtrack of the upcoming feature film "Crisis" starring Gary Oldman and Armie Hammer and directed by Nicholas Jarecki. "Mother," their latest single, was featured on... more
See 2021 $2,500 Baker Artist Award Winning Portfolio
View Outcalls's Resume

Outcalls's upcoming third album, Greatest Hits, Volume 1: Why do we deny women greatness?, is a direct response to former Recording Academy president Neil Portnow’s 2018 call for women to “step up” following decades of male-dominated Grammy Awards ceremonies. The 10-track album by writing team Britt Olsen-Ecker and Melissa Wimbish is a showcase of woman-fronted collaboration and will be released digitally and on pressed vinyl in spring 2021.

Mr. Portnow's flippant language glosses over decades of embedded discrimination; a study led by the USC Annenberg Inclusion Initiative in January 2020 concluded that only 11.7% of Grammy nominees between 2013 and 2020 were women. Only 143 out of 1,220 nominations have gone to women in the last seven years. One of many alarming statistics revealed that, across 800 songs, the likelihood of more than one woman being involved in a duo or band collaboration was just 5.8% compared to the 21% who worked as solo artists. In other words, as the study depressingly summarized: “For females, music is a solo activity.”

Furthermore, it has been the "industry standard" for women to defer to men in the context of production and engineering. The aforementioned USC Inclusion Initiative study reveals that in 2020, from a pool of 500 songs, the ratio of male to female producers was 37 to 1. It is imperative that women become leaders not only creatively, but in the technical aspects of their work. Upon completion of Greatest Hits, Outcalls will have significantly increased their engineering, mixing, and producing credits.

Following the release, Outcalls will complete production for supporting visual material to be presented as five, 8-minute episodes. Music from the album will eventually be paired with documentary footage, interviews, and artistic videography. The entire project will investigate the history and current reality of discrimination imposed upon women in various creative industries and the ways in which women have helped each other thrive in spite of this history.

This album will be one of many that energizes female collaborations, further empowers women to pursue creative leadership roles, and promotes career longevity for women in recording and production. When leaders like Mr. Portnow express fatigue with movements toward equity, statistics like those above reveal the true tiredness in our industry.

Tracks included on the album (in no particular order):
Mother
Love to Fight
Vitamin D
Baltimore Rap
Thots & Prayers
Everything
Call Sometime
No King (Live at Futura Studios)
Get to You
Sebben, Crudele

“In a series of interwoven storylines: a drug trafficker arranges a multi-cartel Fentanyl smuggling operation; an architect recovering from an Oxycodone addiction tracks down the truth behind her son’s disappearance; a university professor battles unexpected revelations about his employer, a pharmaceutical company bringing a new ‘non-addictive’ painkiller to market.” (Deadline)

Director Nicholas Jarecki’s dramatic thriller, Crisis, features the song “Get to You” which was written and performed by Outcalls specifically for the film. Britt and Melissa were tasked with creating a track in the style of Brill Building pop, a term popularized in the 1960s that refers to a subgenre of teen idol and girl group songs.

“Get to You” was recorded at Moose House Studios in Baltimore and engineered by Mathew Oral. Distributed by the indie film upstart Quiver, the movie starring Gary Oldman, Armie Hammer, and Evangeline Lilly will be in theaters nationwide on February 26, 2021, followed by a digital and on-demand release March 5.

“Mother” was released in February 2020 and written in collaboration with producer/singer-songwriter Jennifer Pague of Vita and the Woolf. The lyrics suggest fraught feelings between mother and child without explicitly describing a conflict. While writing and recording the music for “Mother,” Jennifer pushed Britt and Melissa to embrace experimental synth sounds and electronic beats.

Lyrics:
This time I’m licking the plate clean
Hit the bullseye on an easy target
Weren't we just getting somewhere?
It makes no difference
Sit right on top of all the games we used to play
Not gonna make a scene
I’ll lick that plate

Better now, but better when?
This doesn’t feel like it ends

You be the dog, I’m the dirty dishes
Take it all away against my wishes
It’s your fault
Take the blame
Don’t you make a scene
Get that plate clean!
Just like mother would have told me

"Stay" Official Music Video (2020)
Produced by Outcalls and UMBERTO LEE, "Stay" stars Britt and Melissa as sword-fighting seekers of revenge. After Britt's boyfriend (portrayed by her real-life husband, Elliott Rauh) forgets her birthday, the two women decide that he must answer for his crime. Shot in the Harwood and Mt. Vernon neighborhoods of Baltimore, the film features epic cityscapes, fight choreography by weapons expert Lewis Shaw, and unmistakable Charm City swag.

“Stay” promises to be another hit among the duo’s feminist canon with a story familiar to all of us: Failed romance and the petty grudges which resurface during the throes of a breakup. Moments of silence and sparse accompaniment are used throughout the piece in order to showcase natural vocal quality and lyrical content. A lilting ballad melts into the soulful, pulsating chorus with the addition of bass guitar and kick drum. By the second verse, a rhythmic "about face" dials into an unrelenting vocal patter. This work highlights the duo's knack for drama and willingness to defy pop formulas in order to present the best story.

"No King" Live Acoustic (2020)
The results of the 2016 election were devastating for millions of women all over the world. Outcalls wrote "No King" during this period of unrest and anger leading up to the election of twice-impeached president, Donald J. Trump. After four years of performing the song live, it has become an Outcalls mantra for standing up to power.

In November 2020, the group was invited to perform for Baltimore's The Real News Network as part of their Election Night coverage. This live version of "No King" was designed, filmed, and edited by Outcalls.

"Sebben, Crudele" (2020)
The Pleiades Project is an NYC-based artist collective whose mission is to promote and develop the work of female-identifying artists. ​Their video project, 24, is adapted from a famous collection of 24 Baroque tunes which are often assigned as first songs to beginning voice students. Many singers end up despising the collection because of its constant use, but this project is meant to reimagine the work as a vehicle for contemporary women’s stories. At the conclusion of this series, The Pleiades Project will have showcased the diverse work of 30 female artists, including singers, directors, editors, choreographers, and fine artists.

“Sebben, Crudele” by Outcalls is part of the fifth season of 24. With their contribution, Britt and Melissa meant to parody a typical conservatory musician experience. Inspired by the overwhelming number of video meetings and online learning platforms as a result of the coronavirus pandemic, the setting is the first day of voice performance class taking place via Zoom. In this episode, when Britt and Melissa each forget to prepare a song for class, they turn their cameras off, mute their microphones, and throw together a version of Antonio Caldara’s “Sebben, Crudele” which leaves their colleagues shaking with envy.

Reyka Vodka Commercial (2020) & Maryland Department of Agriculture Commercial (2020)
Since March 2020 when COVID-19 was declared a global pandemic, most live music events in Baltimore have been relegated to online and outdoor gatherings. WTMD Radio was one of the first organizations to announce a virtual summer concert series to be streamed on Facebook Live. They invited Outcalls to create commercials for their July and September Virtual First Thursdays sponsored by Reyka Vodka and the Maryland Department of Agriculture. Both commercials were directed, written, filmed, scored, and edited by Outcalls.

"Pillcauzbee" Official Music Video (2019)
"Pillcauzbee" is a soulful, trance-pop ballad that depicts the excitement of a night out followed by the terror of being drugged and unable to move. The victim challenges their accuser with the words, "Here's a question for your heart: Did you leave with what you wanted?"

"Skip to Sunrise" Official Music Video (2017)
Like an operatic ensemble number, "Skip to Sunrise" overlaps two different vocal melodies and sparse lyrical phrases to express individual thoughts on the same event. Vocal polyphony is juxtaposed with sections of unison singing to illustrate both the confusion and moments of clarity within a volatile relationship. A reoccuring melisma, sung in unison by both voices at the end of every polyphonic phrase, functions as a chorus throughout the piece.

Conceptualized by Baltimore writer, playwright, and director Lola B. Pierson, the music video is a collection of experiments in light manipulation, facial expression, and movement. In one frame, ignited sparklers trace the letters "O-U-T-C-A-L-L-S" in an otherwise completely dark room. In another, Wimbish and Olsen-Ecker perform classic Meyerhold movement etudes donning sequin gowns under a red spotlight. These elements of random, experimental theatre combined with imaginatively lit shots and post-production effects by Skyler Jenkins make for a transfixing video debut.

Outcalls self-released their second EP, No King, to critical acclaim in September 2017. The title track catapulted the vocal duo onto the local arts scene with credits from every major Baltimore publication including The Baltimore Sun's "30 Songs that defined 2017," Baltimore Magazine’s "Best Music of 2017" and the "Big Baltimore Playlist," as well as features in Baltimore Beat, Brightest Young Things (DC), and Johns Hopkins University's The Hub.

Outcalls was the recipient of a Baltimore Alternative Music Award from 89.7 WTMD for Best Vocal Performance ("No King"). They were ranked #6 in WTMD's Top 89 Songs of 2017 ("No King"). On the Spotify platform alone, the EP's six tracks have a combined streaming of over 123,000 plays.

"Opening with a staccato synthesizer line, the dramatic 'No King' blooms into a tale of betrayal and revenge sung through lush, layered vocals." -Wesley Case, The Baltimore Sun

"Witchy, somewhat tribal, and even a little bit dusty old Spaghetti Western, 'Skip to Sunrise' has become one of our top songs of the year." -Baltimore Magazine

No King Remixes is an ongoing collaboration with musicians who specialize in beat production. Artists take stems (individual isolated tracks) from the original recording session of a song and create a new version of the piece. A common practice in hip-hop and electronic music, remixes often bring artists together whose paths might not otherwise cross on the local gigging scene. 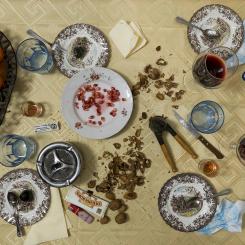 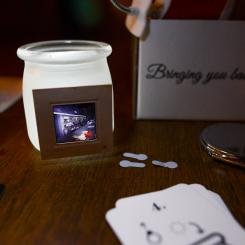 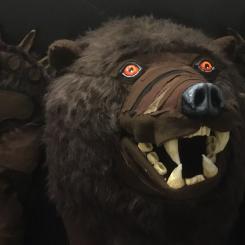 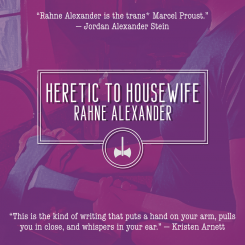