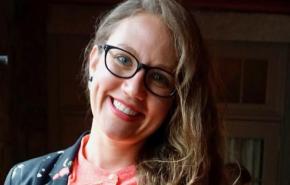 Maria Adelmann is the author of GIRLS OF A CERTAIN AGE (Feb 2021, Little, Brown), a "fearless, darkly playful debut exploring the many impossible choices that accompany 21st century femaleness." Her debut novel HOW TO BE EATEN (Feb 2022, Little, Brown) reimagines classic fairy tale characters as modern women in a support group for trauma. She has previously been a finalist for the Baker Artist Award in Literary Arts, won an Individual Artist Award from the Maryland State Arts... more
See 2021 $2,500 Baker Artist Award Winning Portfolio

GIRLS OF A CERTAIN AGE is a collection of short stories and a novella, forthcoming from LITTLE, BROWN. The stories all feature female narrators and confront deeply female issues, exploring themes like loneliness and friendship, sickness and health, sex and relationships, and war as experienced by those left at home.

In "None of These Will Bring Disaster" a young woman loses her job, then takes up smoking so she can join a paid research study about people who want to quit smoking. In "The Wayside," a young woman working at the historic home of Nathaniel Hawthorne navigates the strange no-man's land between high school and college. In "Elegy," a woman who decides to undergo a prophylactic mastectomy grieves not so much the loss of her breasts, but more so the women she has lost. In "The Replacements," a woman who dreams of leaving her abusive boyfriend ends up running over his dog. In "The Portrait," a deaf girl becomes painfully aware of her condition when she gets lost in a museum. In "First Aid, Notes," a cutter imagines she bleeds a different color for every emotion she feels. In "Animals," a young girl growing up in the 90s becomes jealous of a friend whose house overflows with pets and toys. The final straw? A digital pet, the Tamagotchi.

The collection includes twelve short stories and one novella, a selection of which appear in this portfolio. Stories from the collection have been previously published in the Indiana Review, The Threepenny Review, Epoch, The Southeast Review, Bare Fiction, Carolina Quarterly, Michigan Quarterly Review, Cicada, Tin House online, and Alaska Quarterly Review.

Novel: How to be Eaten

HOW TO BE EATEN (forthcoming from Little, Brown) reimagines classic fairy tale characters as modern women in a support group for trauma. The group meets over a single summer in a basement-level rec room in New York City.

While the main drama of the book is contained within the arc of each of the five women’s personal narratives, the women are inexorably linked—not just by the group itself, but by common circumstances and themes that allow the women to become reference points for one another. The women are all public in some way—C-list celebrities or child-stars of tragedy, tabloid punch-lines or internet memes. The women’s tales echo themes about the effects of psychological trauma, the role of women in society, and the media’s propensity for idealizing romantic love, blaming the victim, and simplifying the story.

And these women’s lives are far from simple.

Little Red Riding Hood, all grown up, is frequently in crisis and self-destructive, ostensibly reenacting the terrible traumatic thrill of being digested by a wolf. She sleeps around, loses her job, wanders the city talking to pigeons (who talk back), and wears a wolf-skin fur coat in even the most stifling summer heat. The coat grows dirtier, smellier, and more absurd as the summer progresses.

Miller’s Daughter—the unnamed heroine of the Rumpelstiltskin story—has been traumatized by the moment Rumpelstiltskin literally (and horrifically) split himself in two after she guessed his name to save her baby. She spends group remembering how she arrived at that moment. Her biggest secret, saved for the final session, throws a new light on her entire story.

Bluebeard’s Wife, as she’s called in the tabloids, grapples with the fact that she fell in love with a serial-killing tech bro billionaire who turned his girlfriends into furniture after murdering them. She navigates the media onslaught, which treats the victims as brainless gold diggers. She collects the dead-women furnishings, in an effort to give them a voice.

The final woman in the group is Aimee, the most recent winner of The Bachelor. To Aimee, the other women—whose ten minutes of fame were up way longer than ten minutes ago—seem like old news. But the reader wonders: If the premise of Bluebeard or Rumpelstiltskin is passé, then where does The Bachelor fit, with its two-dozen women held captive in a mansion to compete for one man’s love? Aimee grapples with the fallout of the show—she’s living in a strange city with a fiancé she hardly knows, but it’s the “villain edit” that’s really ruining her life.

Ultimately, HOW TO BE EATEN is a novel not just about trauma, but about how stories are consumed and who gets consumed by them. It’s about women finding their voices. It’s a ripe theme for fairy tales, which have long been viewed as tales told by women for children, and have been written off as a non-serious, domestic art. But here are the women, with all of the power and humor and insight they posses, grappling with their pasts and deciding for themselves how to move on into the future.

My nonfiction and other writings have appeared across the internet and in print. I've published humor pieces, political essays, travel writing, and personal nonfiction, covering topics far and wide: cruise ships, millennial politics, stink bugs, David Hasselhoff. My humor writing has appear on McSweeney's Internet Tendency and my essay about the financial hardships of becoming a writer appeared in the book MFA vs. NYC, published by n+1 and FSG. The essay was mentioned by Dwight Garner in The New York Times review of the book.

This section provides just a brief look at some of my other work.