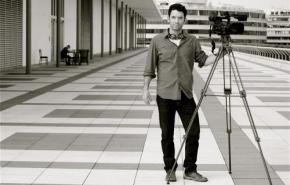 Khalid Ali is a filmmaker and educator from Dundalk, MD. Originally trained as a commercial filmmaker in Los Angeles, Khalid developed an interest in documentary film when he began traveling to China with his older brother. Intrigued by the ability of his camera to bridge cultural differences, his experiences there evolved into a series of documentaries about Chinese urban culture, particularly on the margins of society. Since returning home in 2010 Khalid has applied the same approach to... more
See 2021 $2,500 Baker Artist Award Winning Portfolio
View Khalid's Resume

The "Squeegee Boys" are best known for washing windshields of cars stopped at intersections around Baltimore. Seen by some as hooligans and by others as entrepreneurs, little is known about the actual circumstances that drive these young men to pick up a squeegee. This documentary follows the working days of seven young men as they navigate the busy intersections of Baltimore in search of tips. The footage shows scenes likely familiar to many locals who daily encounter the "squeegee boys" from their cars. But shown from the point of the view of the "squeegee boys", the film offers new insights into the lived experiences of these young men.

Away from the Grasslands

A behind-the-scenes look at the ethnic Mongolian band, Hanggai, as they gather in Beijing to record a new album. Woven with live concert footage, intimate interviews, and an all-access look at the recording process, this film captures the band's attempt to preserve the past while creating something altogether new. Hear it from the band members and their producer, acclaimed Dutch musician and producer, JB Meijers, as they weave together musical influences as far back as Genghis Khan, as distant as punk rock, and as personal as the herdsmen's songs from the prairies of their childhood.

Rediscovering Paul Moscatt explores the life, work, and artistic vision of prolific Baltimore painter and retired MICA instructor, Paul Moscatt. This intimate film catches up with the 86 year-old artist as he paints and teaches, taking audiences inside the mind of one of Baltimore’s living art icons.

Ballad of the Knife Sharpener

The knife sharpener has been a fixture of Chinese street culture for centuries. In recent years, however, they have all but disappeared from Chinese city streets. This film follows Sui Gan Dan, a young knife sharpener with surprising vocal talent, as he tries to make ends meet in Beijing.

The story of three American brothers who travel to China to realize their dream of studying Chinese martial arts. As they journey from the old neighborhoods of Beijing to the legendary temples of the Shaolin Monastery, the brothers cross paths with martial artists from all walks of life. What follows is an amusing and intimate portrait of friendship, family and the lessons learned from lives dedicated to the art of combat.

A video sketch exploring landscapes of the Badlands, Minneapolis, Baltimore, and Chicago.

A video sketch documenting the demolition of a former grain terminal in Southeast Baltimore.

A video sketch exploring the ruins of the Mayfair Theater in Baltimore.

Beijing Story follows Cong Pai, an aspiring punk-rock guitarist who drops out of high school after his mother's sudden death. Being in a punk band gives purpose to his life as well as an escape from it. Cong Pai lives with his dad, who disapproves of his son's lifestyle, but also struggles with the guilt of being unable to fully provide for his son.

My father, Shahid Ali, reflects on his early life in Pakistan before emigrating to the U.S.