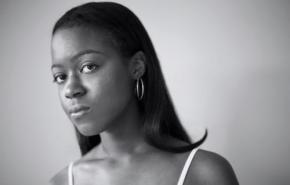 Tyler Yvette Wilson is a multidisciplinary artist who primarily works with text, photography, and video. She blends autobiographical, current, and historical narratives that discuss the aftershock of colonialism and the foundations of trauma that underlie most of Western society. Tyler studied at Davidson College from 2010 to 2016. After graduating with a B.A. in Studio Art, she attended Oglethorpe University for post-baccalaureate studies. In 2020, she earned her M.F.A. at Maryland... more
View Tyler Yvette's Resume

Broken English is an artist’s book about European colonization and its effect on modern society, especially regarding language. The Prologue and Punctuation Marks blend English dictionaries with languages from Britain’s former colonies. In this case, India and East Africa. Punjabi, Swahili and English intermingle in a composed cacophony. Having imposed itself on every page, the English language dominates the installation. The Prologue and Punctuation Marks also contain pages from novels in the Western literary canon that are hailed as must-read classics. These include Moby Dick, The Adventures of Tom Sawyer, Canterbury Tales, The Last of The Mohicans, and Heart of Darkness. All share the theme of a European or American male traveling through unfamiliar land. When the men encounter natives and people of color, the descriptions are rarely (if ever) flattering. Brown characters are often depicted as unintelligent, violent and speak with broken English.

Riddled with negative depictions, these tales reinforce Western notions of social hierarchies based on race, class and gender. To counter that, I recklessly dismembered pages from the books and literally disrupted the English narrative. By mixing the dictionaries and stories together, Broken English directly connects invasion, imposition, and implication.

To see each page, please follow this link: http://tyleryvette.com/portfolio/black-body-radiation-pt-ii/

"Twisted Tongues" is an ongoing series that alters nursery rhymes and children's tales to shed light on the foundation of violence that underlies western culture. It takes the form of several iterations. In these artist's book, a noose strings stories sung by brown skin.

It Fit The Description

It Fit the Description is both an autobiographical narrative and a social critique. It’s based on an incident in pre-k when a white boy approached me and said, “You’re black”. I replied, “No I’m not. I’m brown”. I grabbed a brown and a black crayon and held them to my skin to prove that the brown crayon matched me, not the black one. He looked stumped and said, “Well that’s what my dad told me. He said you’re black.” I asked if he wanted to find the teacher with me and ask which color I was. He nodded and off we went. My recollection ends there.

With that memory in mind, I removed wrappers from brown crayons and rewrapped them with labels from black crayons. It’s a comment about how the diversity found in a spectrum of brown skin tones is categorized as one color. With this particular piece, I am illustrating how this becomes an issue when police interact with Black people. The sounds of sirens and “Ring Around The Rosie”, a nursery rhyme about The Black Death, extend the narrative.

"23 Famous Stories Retold" is a multimedia installation that exists on the doors and windows of institutional conference rooms. Sound, broadsides, text on glass and an artist's book dissect popular children's tales (e.g. fairy tales, fables, hand clap games, nursery rhymes) and reassemble them into instructions that Jack must follow to escape a troubling reality.

To listen to the audio, please follow this link and scroll to "Oral History" :http://tyleryvette.com/portfolio/jack-be-nimble/