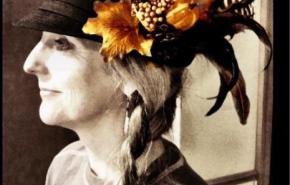 I believe that in a world that worships competition, collaboration can be viewed as a radical threat. I believe collaborators can tap into that lonely creative spark that hungers for attention and nourishes innovation. I believe collectively designed public murals encourage civic pride. I believe flipping the power structure of teacher/learner encourages students to teach me what I don’t know I don’t know.  I believe in the solace of crocheting together in a public park and the ephemeral joy of... more
View Martha's Resume

KALI - Manifestation of a Goddess

Upon returning from the Women’s March on Washington after the disastrous election of 2017, I was compelled to crochet a tribute to Kali, the goddess of time, creation, destruction and power. Considering the destructive results of that ill-fated election and the subsequent worldwide pandemic, it seems that Kali has truly released her wrath upon this world. Hopefully, we will now reap the benefits of the creative aspects of her manifestation.

Additional details:
Following the Hindu tradition but adapting to our Arabic alphabet, her necklace consists of 26 severed heads, one for each letter of the alphabet representing the power of the written word. She wears a skirt of dismembered arms because the ego arises out of identification with the body. In truth we are beings of spirit and not flesh. So, liberation can only proceed when our attachment to the body ends. Thus, the garland and skirt are trophies worn by Her to symbolize having liberated Her children from attachment to the limited body.
Kali’s right hands form the abhaya (fearlessness) and varada (blessing) mudras. Her left hands hold the sword of divine knowledge which has chopped off the orange head of human ego. (Any similarity to persons living or dead are purely coincidental.)
Lord Shiva, Hindu god of Creation, Destruction and Regeneration, the patron god of yoga, meditation and art soon followed in the manifestation. You might recognize him by his third eye, matted hair and the crescent moon on his forehead.

There is a story that Shiva used to walk around naked, and this really caught the ladies' attention. The wives of several powerful saints became extremely distracted, and this caused a bit of jealously. The husbands created a tiger to take care of the bare-bodied sage, but Shiva symbolically defeated the tiger and wrapped himself in the skin, symbolizing the victory of the divine force over animal instincts. Shiva wears a tiger skin symbolizes that he has conquered and transcended illusion and ego.
Vasuki is a nagaraja, one of the King serpents of Hinduism and Buddhism. There is a story that there was once a lethal poison called Halahal. This poison terrified the gods and demons because the poison was so powerful that it could destroy all of creation and was even harmful to a god. The other gods approached Shiva for protection. Shiva, being the daring god that he is, consumed the poison to protect the universe. His wife Parvati (an aspect of Kali) grabbed Shiva's throat to prevent him from swallowing the poison. As it is not feasible even for a goddess to hold on to anyone's neck forever, it is believed that she tied the snake around his neck to prevent him from swallowing the poison. As a result, Shiva's throat turned blue. For this reason, Lord Shiva is also called Neelakantha (the blue-throated one; "neela" = "blue", "kantha" = "throat" in Sanskrit).

There is another story that when the snake species were endangered, they approached Shiva for shelter. As a protector of snakes, Shiva wears them as ornaments to keep them warm, plus, they are fun to make.

There is yet another story that Kali was rampaging out of control and destroyed many demons. Shiva, fearing that Kali would not stop until she destroyed the entire world, could only think of one way to pacify her. He lay down on the battlefield so that she would have to step on him. Seeing her consort under her foot, Kali realized that she had gone too far, and calmed down.

Due to the Stay at Home recommendation during the Spring and Summer of the 2020 Coronavirus Pandemic, magical critters began appearing along Chester Street in Baltimore, Maryland, USA. Their mission was to comfort and entertain the residents. You can find them by following this map.
https://tinyurl.com/yaf46syx
And you can watch a short video at:
https://youtu.be/KqaHBatTOSI

In honor of the Winter Solstice, I organize a collaborative neighborhood project called “Window Solstice”. The goal is to bring people outside of their homes in the middle of the winter when most would instead be stuck inside staring at screens. As you probably know, December 21st is the longest night of the year and traditional rituals involve welcoming back the light.

The instructions are quite simple: cut silhouettes from craft paper, tape them in your windows, and turn on the lights creating a fanciful display from the sidewalk. The theme can be anything as simple as a basic back lit silhouette of a Christmas tree or as elaborate as a visual retelling of an epic Greek myth.

I started the celebration in 2019 and led a walking and caroling tour complete with hot chocolate stations. We had more than 20 houses participate in the displays and over 100 people walk, sing, and view them together. The great lock down of 2020 kept us from viewing as a group, but it was even more important for us to celebrate bonds with our neighbors. Instead of walking and caroling together last winter, I created an on-line map so that we could enjoy a socially distanced celebration. Even in the midst of a global pandemic, my neighbors joined their forces of love and joy and creativity in bringing back the light via 30 window displays that were even more elaborate than the first year. I am looking forward to continuing the tradition in 2021 with all the social trappings. I would love to include even more households, possibly extending the tradition beyond my Butchers Hill neighborhood and across the entire city.

I am passionate about this project because we live in a city with a reputation of crime and grime. The most effective tool that I know how to utilize to improve safety and wellbeing is to encourage people to get to know one another IRL, get outside and walk the neighborhood. This task is much more challenging in the cold and darkness of winter. Window Solstice provides a joyful reason to bundle up, come out and celebrate. Rather than the normal gloom and doom stories that seem to spread about us, I would like for Baltimore to be known as the city that celebrates the return of the light.

Shown here are images I created for my own house (the Bird House and My Neighbor Totoro) as well as those I created for a local restaurant and the pagoda in Patterson Park. Rather than just my own images, I consider the entire collaboration to be one large cohesive project.
Some fun links from past celebrations.

2019
Here's a video
and a walking tour map with thumbnail images:

2020
Video and Map
and some press from the Baltimore Fishbowl 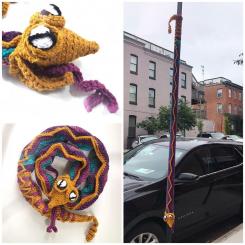