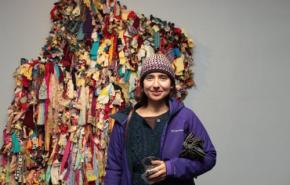 Jessica Walton (Baltimore, MD) is a fiber and mixed media artist whose work is inspired by a love of art history, archaeology, psychology, process, material, and the human body.  She spent a month in 2014 in Mexico as a fellowship recipient for the NEH Summer Institute Pictorial Histories and Myth Histories: ‘Graphic Novels’ of the Mixtecs and Aztecs. This experience influenced the current body of work she is working on, a series of sculptural heads and masks using a traditional basketry technique... more
View Jessica's Resume

These masks are made using a basketry technique called coiling. The process of making these works, like many traditional fiber techniques, is repetitive and labor intensive. I enjoy the meditative process of wrapping, building up forms thread by thread in an intuitive way.

These works are inspired by mask making traditions from around the world. Masks conceal and reveal identity. They allow their wearers freedom to hide and space to explore new versions of themselves. They are theatrical, playful, multi-colored and often grotesque. These works explore multiple identities, veiling and revealing hybrid beings.

These heads are made using a basketry technique called coiling. The process of making these works, like many traditional fiber techniques, is repetitive and labor intensive.  I enjoy the meditative process of wrapping, building up forms thread by thread in an intuitive way.

These works are inspired by mask making traditions from around the world. Masks conceal and reveal identity. They allow their wearers freedom to hide and space to explore new versions of themselves. They are theatrical, playful, multi-colored and often grotesque. Like masks, these works explore multiple identities, veiling and revealing hybrid beings.

The fabrics used in these works come from many different sources. There are pieces of material in them that I have lived with my entire life. Many fabric pieces were kindly donated to me by friends and family. Other pieces were once worn, discarded, and now repurposed.

The process of making these works, like many traditional fiber techniques, is repetitive and labor intensive. I enjoy the real or imagined memories associated with each piece of fabric in these works. The tactile process of cutting and sewing the pieces of fabric brings together an accumulation of material, memory, and labor.

The Remnants Reimagined work was installed for the show "Goodwill" curated by Sarada Conaway in the Gallery at CCBC Catonsville.

The Remnant dress was made for the show "Ordinary Woman", curated by Diana Marta at the Howard County Arts Center and later installed at the gallery at CCBC Essex's inaugural exhibition "Dedication".

These drawings are formed through overlapped renderings of bodies. Out of the configurations of figures grow unexpected relationships and encounters. As the figures overlap, each individual rendering of the figure becomes more obscured. Parts of figures merge into new versions of form. They become abstracted and blurred forms, transparent and indefinite.

I am interested in the psychological and physical relationships that form between these many versions of the body. Are these loving or violent, perverse or celebratory?

A Mythology of Anatomy

These human scaled mixed-media drawings are meant to evoke doorways and mirrors. These works are filled with metamorphosis, with connections both harmonious and tumultuous. I intended to depict multi-gendered and multi-colored spaces, filled with modern day versions of the many-headed monsters of myth.

These are a series of observational graphite drawings of twisted and braided fabric constructions made in my studio.

In my life and work, I have grown to desire a more fluid understanding of identity, one that blurs gender boundaries as well as cultural and linguistic boundaries. I am also interested in blurring the physical boundaries between the body and landscape as well as the intellectual boundaries between our bodies and culture. In my thesis work, I collected imagery and recombined that imagery to create mythical spaces that cloud the distinctions between the body and the landscape, between organs and machines, between human and animal, and between male and female. The works are composed of collaged layers of colored pencil drawings inspired from found images, many of which are textures and patterns from the landscape and water mixed with organs, muscles and skeletal structures from the body.

Many of these concerns are deeply rooted in the ideas raised in Donna Haraway’s “ A Manifesto for Cyborgs: Science, Technology, and Socialist Feminism in the 1980’s”. In this essay, she calls for a reworking of personal identity that includes a more fluid mix and blurring of human/animal, organism/machine, and male/female. She desires a “monstrous world without gender”. Haraway writes,

"So my cyborg myth is about transgressed boundaries, potent fusions, and dangerous possibilities which progressive people might explore as one part of needed political work. One of my premises is that most American socialists and feminists see deepened dualisms on mind, body, animal and machine, idealism and materialism in the social practices….But a slight perverse shift of perspective might better enable us to contest for meanings, as well as for other forms of power and pleasure in technologically mediated societies…. a cyborg world might be about lived social and bodily realities in which people are not afraid of their joint kinship with animals and machines, not afraid of permanently partial identities and contradictory standpoints….Single visions produces worse illusions than double vision or many-headed monsters. Cyborg unities are monstrous and illegitimate; in our present political circumstances, we could hardly hope for more potent myths for resistance and recoupling." (Haraway, pg.13)

Where does our body begin and end? Do the thoughts in our mind inhabit our physical body and how does that relate to our relationships with others and with the many versions of ourselves? How does the technological world influence our relationship with each other and our bodies? Haraway’s monstrous world without gender is one way of celebrating a world without normative hierarchies. By blurring our fixed notions of identity to include many contradictory and non-essential understandings of identity, it may some day be possible to live in a world less dramatically plagued by racism, homophobia, sexism, and classism. The piece anamesa came directly from these ideas. “Anamesa” means between in Greek. It is the areas between our fixed notions of identity and physical boundaries that interest me. The figure in the piece is meant to be a morphed figure without gender or race, a mixture of animal and human as well as animal and machine.

In art history, the landscape has often been associated with the feminine body. In the piece Circular Ruins, I wanted to create a landscape that was neither masculine nor feminine, a place where our bodies could become part of the landscape, where the architecture of our bodies became part of building ruins, where plane wings became bird wings, and roots became spines. It is also a landscape inspired by mythology. The figures in the piece are modern-day versions of the fabulous many-headed monsters of Greek Mythology, chimeras and sirens collaged together of airplane wings, feathers, spines, organs, architectural infrastructures, rocks, and roots.

In Circular Ruins, I tired to create a space that is both intimate and inviting as well as larger than life and a bit horrifying. It is a combination of the inside and outside of our bodies as well as the micro and macro worlds of our landscape. There is an element of the destructive relationship we have with our environment as well as references to natural and human-made disasters. It is a blurring of beauty and the grotesque. We live in a world full of connections and contradictions. In my work, I have tried to envision a multi-gendered and multi-colored monstrous space without binaries, a world filled with connections, both harmonious and tumultuous.