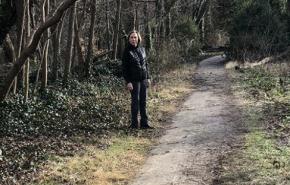 Christine Neill is a nationally exhibited American artist whose work blends motifs of biological examination with visual processes and techniques.  The effects of environmental changes and invasive species on human life and the reaction of earth’s habitat to these threats underlie all her images. She is represented by Goya Contemporary, Baltimore, MD.  Neill comments on ways Covid 19 pandemic has impacted her studio work:  I watched with great sadness as the corona virus... more
See 2021 $2,500 Baker Artist Award Winning Portfolio
View Christine's Resume

As I do every spring, I gardened in 2020 while isolating from the pandemic. A neighbor, also doing a lot of planting, developed a noxious rash on her legs and arms. We identified (while distancing) a poison sumac sapling that had rooted in her garden, which she had inadvertently brushed against.
That incident prompted me to research plants surrounding us that ranging from uncomfortably irritating to inexorably fatal. Each plant in this series is native to or is cultivated near my Baltimore studio. However, I find it reassuring that humans have live with these species for hundreds of years avoiding illness by becoming informed about their characteristics and treating them with caution. Most of the toxic species are harmful when ingested. Unfortunately, children and animals are most often the victims.

Isolation Watercolors 2020
In March 2020 at the beginning of the Corona-19 pandemic, I canceled
a research trip to San Diego and the deserts of Southern California.
While isolating in Baltimore, I walk daily in Linkwood Park and on
Stony Run Trail, picking up small natural objects, familiar and intimate.
When drawing them in my notebooks, I loosely interpreted shapes. The
images gravitated to the page top and bottom, without shadows or ground,
separated by the space between. The compositions and scrutiny of the
images remind me of the solitariness of covid isolation. Subsequently,
I redrew the images in water soluble colored pencils on full sheets of
Arches WC paper and paint them in watercolor.

Making prints allows me to investigate imagery similar to that of my paintings in varied mediums
and processes, as well as try out new imagery. I made these prints at Zea Mays Printmaking in Northampton, MA during Fall 2020, under the masterly guidance of Joyce Silverstone.

My work chronicles the ephemeral states of the natural world and notes the intersections where environmental and anthropological spheres meet.
As an artist, I feel compelled to visualize the damaged condition of our environment as I’ve observed and researched. I’m aware that cultures, especially marginalized communities, are inequitably impacted by these perils.

While the effects of environmental climate changes are well documented and progressive, through collective human effort they can be slowed, possibly reversed. Using the immediacy of fluid paint mediums in tandem with my own photographs to interpret natural shapes and internal structures, I reference antidotes to the dangers and threats.

Printmaking is a process that parallels my layered paintings.  Print techinques are a way for me to experiment with concepts, color  and composition. In turn, the mixed-media watercolors  influence the prints. I prefer the immediacy of monoprints and use non-toxic methods.

I periodically work with the singular, low lighting found between dusk and dawn. While nighttime is very active in the natural world, human perception slows and changes. The process of taking night photographs differs from studio painting in that the nocturnals are less direct, cannot be hurried and is simultaneously an unnerving and engrossing procedure. Human is challenged in the dark.
“You understand that the stars are always here. They do not go away in daylight. It is that we can only see them in the dark. That is the good thing about the dark.”  Caroline Herschel,19 c Astronomer

Text about one's work and achievments parallel the artist's studio practice. The reflective process of assembling a resume, revising bios and writing about the work helps  ideas to evolve. These documents are always in progress. Included  here are a photo of my studio, insights of what I and others have written recently,  a Narrative Biography, Artist & Curator Essays, and Reviews. 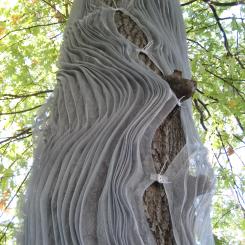 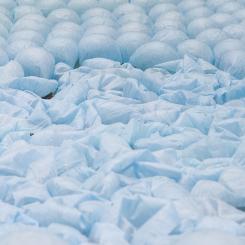 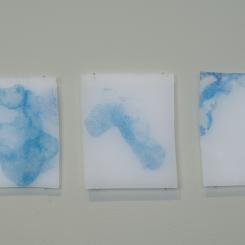 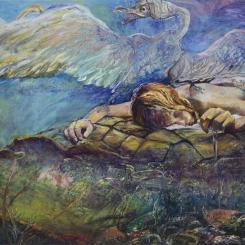 once it was this 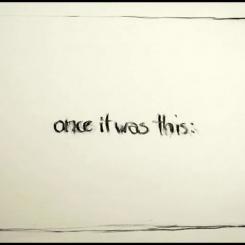 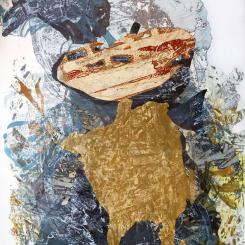 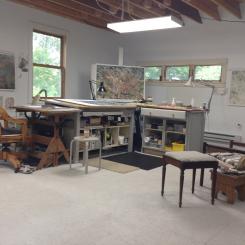