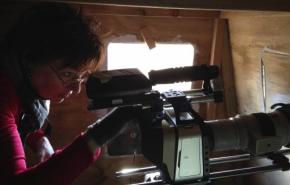 Cathy C. Cook is a Baltimore based artist, filmmaker, educator, production designer, and eco-activist. Her films and projects have addressed topical social issues, women's roles, personal chronicles and natures' environmental conditions. Her award-winning work has been exhibited internationally in both solo and group shows including MOMA, The Whitney Museum, PBS and numerous other venues. In 2001, Cook was awarded a Guggenheim Memorial Fellowship. Recently Cook’s “Cranes in Motion” project took her to... more
View Cathy C.'s Resume

Eye Movie (in-progress) is a short experimental first-person essay film that reveals my fascination and struggles with ocular disorders. On September 15, 2016, while driving alone on a freeway, I experienced a retinal tear and full vitreous hemorrhage in my left eye resulting in total temporary blindness. The next day I underwent emergency retina surgery. While in a twilight state of anesthesia, I experienced the procedure intimately and remembered observing an array of colors, patterns, and organic movements as well as the operating tools. The surgical imagery reminded me of work by early Avant-Garde filmmakers such as Oscar Fischinger, Hans Richter, and painter Wassily Kandinsky. This film draws on the images I saw during the surgical procedure and what has since been a long medical journey to regain visual acuity. To further contextualize the eye as an organ, collaborating percussion vocalist, Dominic “Shodekeh” Talifero, will incorporate throat singing and beatbox to the soundtrack score. Hand manipulated 16 mm film and direct application techniques combining 'low tech' with 'high tech' (analog and digital) will create a rhythmic kaleidoscope of ocular exploration.

The Cranes in Motion project is an intermedia exhibition including documentary, interactive moving images, poetry, animation and sound to explore the fascinating dynamics of crane culture and natural history. It artistically interprets the fascinating dynamics of crane culture in an effort to understand this unique species and our shared ecosystems. “I am compelled by the longevity of the crane and their struggle for survival to further explore the complexities of their ecosystems.”
The multi-media exhibition installation artwork includes: Mimicking Whooper (1st media image) which uses state of the art gaming software to provide an opportunity to virtually interact with Whooping Cranes - to figuratively dance their dance. Prehistoric Resurrection (2nd media image), inspired by the idea of ‘resurrection biology’, this animated and live-action short visually connects prehistoric references to crane survival and longevity through the beauty of movement and the tools of technology. A 3-D animated crane skeleton emerges from an actual photo of a 12 million year - old fossil that then transforms into motion; interacting with present-day Sandhill Cranes and flies away with the flock. Summer Home (3rd media image), shot in Wisconsin, Cedar Lake, Town of Union.
Extreme Close-Ups, through the lens, the photographs enable us to meet the cranes eye to eye, and ponder the magnificent details of evolution’s handiwork. Specimens 2015, a fragmented view of the crane skeleton. Crane Migration Sound Recordings, a collaboration with field recorder, Paul Dickinson. Crane & Nature Poetry featuring 4 poems united with images: Lorine Niedecker (20th Century), Linda Hogan (21stcentury), Japan Emperor Uda (867 –931) the 59th emperor of Japan, and Cathy Cook.

The Whooping Crane has been on the endangered species list since 1967, and is the subject of a population recovery program that includes migration training. The Sandhill Crane has been the subject of the most successful recovery program to date, bringing the species’ numbers back from the brink of extinction.
Cranes in Motion is the culmination of Cook’s extensive research from 2013 to 2016. While in the field, she and collaborator Paul Dickinson braved freezing temperatures to document thousands of migrating cranes at their refueling stops in Nebraska, Wisconsin, and Maryland, capturing their calls, mating dances, migration patterns, nesting, and other activities. Ultimately, Cook aspired to create an experience that will help connect humans to cranes at a time when their wetland and grassland homes are threatened and their environment compromised, opening the way to a greater understanding and empathy for the complex ecological issues surrounding this ancient species. Drawing on her decades of experience directing and producing films, Cook approached this project with the same directorial oversight as a filmmaker. She collaborated with numerous artists and organizations whose work has enriched the Cranes in Motion project.

The "Cranes in Motion" project - Photos and Poetry

Extreme Close-Ups (2015, color archival Inkjet prints, variable dimensions)
Through the lens, these photographs enable the viewer to meet the cranes eye to eye, and ponder the magnificent details of the evolution’s handiwork. Patuxent Wildlife Research Center in Laurel, Maryland permitted me to photograph during the yearly physical exams of their captive Whooping cranes and Sandhill cranes.

Specimens (2015, color, archival inkjet prints, variable dimensions)
A fragmented view of the crane skeleton. After we animated the crane skeleton for Prehistoric Resurrection and Mimicking Whooper, I then studied and photographed the individual bones with a macro lens to expose the trachea and other unique crane features.

Living for years in the solitude of rural Wisconsin, poet and experimental writer Lorine Niedecker (1903-1970), chose what many might see as a lonely path. But out of her very deliberate and austere lifestyle came a poetics of observation so acute that some literary critics have described her as the 20th century’s Emily Dickinson. Taking cues from Niedecker’s work and the Wisconsin heritage they share, experimental filmmaker Cathy Cook combines original live-action footage, animation, archival images and the poet’s only audio interview to unfurl the poet’s psychological and physical landscape. Through a repetition of images, text and sounds that mirror Niedecker’s own processes and forms, Cook gives new voice and visibility to the extraordinary works of this very private poet. Niedecker’s ruminations on nature, history, ecology, gender, domesticity, work, culture, family and social politics find new life in the sensitive cinematic interpretations of fellow artist, Cathy Cook, whose own critical and original aesthetics constitute a broad and refreshing challenge to the conventions of both documentary film and the cine-biography. Niedecker and Cook meet up on a path not taken and IMMORTAL CUPBOARD is Cook’s report back from way down that path.

Beyond Voluntary Control conveys the experience of psychological and physical confinement. Through a surreal montage of haunting images from diverse sources, a sense of the obsessions, phobias, and diseases that constrict personal freedom is tellingly communicated. A soundtrack with poems by Emily Dickinson and Sharon Olds escorts the visual, and an interview with the filmmaker’s mother poignantly underscores the latter’s struggle with Parkinson’s disease. Dancer David Figueroa contributes his original and evocative movements to the mix.
- lock yourself in, let yourself go -

Both Towers Have Fallen (2001, 2 min. or continuous loop, animated photos & video) -
When living in Brooklyn, New York I could see two gas storage towers at one end of my street and at the other end, the World Trade Center towers. In 2001 the gas towers were demolished by the gas company. On September 9th, 2001, I was paralyzed as I stared out my window. I eventually took a sequence of photos over 2 days which resulted in this short video.

A Fish Out of Water
Ahhh... Asphalt!
Fire

The Match That Started My Fire & Other Gurly Shorts (DVD)

This unconventional comedy explores women’s sexuality through candid stories of sexual discoveries, fantasies and pleasures. Visually stunning, yet unnerving, the film is a visual montage of found industrial films and original footage of swirling skirts, monumental machinery, ocean life, and befuddled reaction shots. The phone rings and the girl-talk begins: secrets emerge and confessions build as the audience is taken on an adventure of sensual humor.

June Brides (1987, 10:00, 16mm) | Cathy Cook & Claudia Looze
“A wacky and uproarious depiction of dominant institutions is offered in June Brides. . . . A pair of bride filmmakers have wild adventures while careening through the expected wedding activities. The film plays with sets, performances, animation and video to produce a celebration of the silly human dimensions of nuptial occasions, while relentlessly putting aside the official bridal magazine script of events. June Brides holds out the hope of the female transformation or appropriation of the dominant culture.”

Bust UP (1989, 7:00, 16mm, B&W)
Tea time will never be the same! This tickling thriller about an afternoon tea features Holly Brown, who spontaneously transforms into several female personas that startle and entertain her surprised guest. Brown’s characters are obsessed with formalities of etiquette, pedigree and hospitality while spoofing sex roles and stereotypes.

“There’s energy galore in Cathy Cook’s successful Bust Up, in which a nervous visitor for tea is subjected to the hair-raising whims of a volatile drag queen (Holly Brown.) One powerful moment should at no cost be divulged.”

“A brief but pungent film…. … starring impersonator Holly Brown. It is a shrewdly shot, sharply cut spoof of sex roles and stereotypes, drawing on the mannerisms of a middle-aged Bette Davis to convey long-suppressed feelings of rage and aggression.”

My exhibition, "Entrails & Leftovers", reflects my intrigue with nature’s elegant beauty and the changes that evolve within ecosystems where humans and animals clash and co-exist. From August 2011 through summer 2012, I lived alone on a small lake in North Central Wisconsin. This rural environment is primarily dedicated to farming, recreation and hunting, but also designated as wetlands and the home to abundant wildlife. In the span of this year, I spontaneously observed and documented human and animal interaction. On daily dog walks, I was simultaneously fascinated and disgusted by butchered farm chickens, hidden animal carcasses and deer innards left by hunters. The decaying of a freshly killed deer for me became a still life evolving over seasons.

Production Design & Art Direction for films and commercials (1990 to 2017)

Besides creating and executing Production Design for my own films, I have worked as
a Production Designer for indie films, commercials and theater in New York and Baltimore.
Over the years I have had the privilege to work as a Production Designer or Art Director for the following selected directors and clients: Yvonne Rainer, Su Friedrich, Barbara Hammer, Lynne Sachs, Dina Fiasconaro, Junkyard Wars, the Learning Channel and CBS. This creative job allows me to collaborate with other talented filmmakers to bring alive images and environments that are alluded to in the script.

a still frame from Beyond Voluntary Control 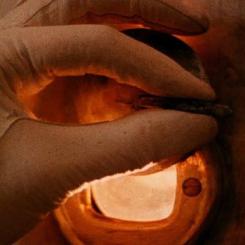 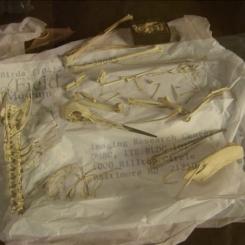