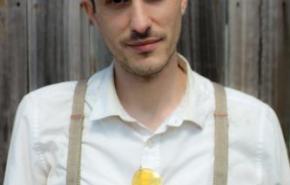 Elliott Grabill has composed independently for over a decade, receiving commissions from ensembles such as Pique Collective, the Washington Men's Camerata, and Dark in the Song. His compositions have been described as “sumptuous and gorgeous,” “hauntingly beautiful,” and “very American.” In addition to concert music, he has written for film and dance. He develops much of his musical voice from studying and writing electronic music. The lyrics to his art songs, which he writes himself, have been... more
View Elliott's Resume

Song Cycles by a Math Teacher

My song cycles are informed by over ten years of teaching math and working with students of all ages, from elementary school children to prison inmates. "Teacher Tales," to which I authored the lyrics, bears personal witness to an ever growing segment of impoverished citizens. "My Biggest Mistake" is based on a conversation with a Baltimore mother had to work so hard to provide her son with the basic necessities that she regretted even having a him. "The Food Chain" is my cynical reflection on bullying, and "A Serf To Your Wage" parodies the lessons taught in schools that, as Noam Chomsky puts it, manufacture consent. I borrow musical ideas from cabaret, jazz, and twelve-tone music to give these sinister texts an American flavor. These songs were runner up in the Arcade Emerging Composers Competition.

For my next song cycle, I'm commissioning three Baltimore City high school poets to write the lyrics. I am offering these poets are receiving mentorship and guidance, and in mid-2021, the lyrics will be complete and I will begin writing the music.

"Mountain Piques" is a composition I wrote for the Pique Collective, a Baltimore-based contemporary music ensemble. It was premiered on October 18, 2018 at the Black Cherry Puppet Theatre, who crafted abstract shapes and choreographed their movement to the music.

The work is a quartet for three acoustic instruments (guitar, flute, and cello) and a fourth musician who, using a laptop computer's trackpad, controls a range of sounds just like a normal instrument.

"Mountain Piques" embraces many classical music archetypes. Before electronics, composers used the flute’s flutter, the cello’s warmth, and the guitar’s intimacy to convey imagery of nature. I add a psychedelic quality to the work's pastoralism with audio samples of birds, frogs, and ambience. Like much classical music, the piece also explores rhythmic complexity, polyphony, and uses four contrasting movements as an expressive canvass.

The slow first movement, "The Rainforest," ends with the metaphor of a ticking clock. "Bursting at the Brim," the title of the second, scherzo-like movement, comes from a line from “Ode to a Nightingale,” by John Keats. Electronics this time bring in the sounds of birds, again creating a musical metaphor.

"The Heaven of Animals" and "Waterfall" are longer and more experimental. In these movements, sounds of the forest become erie, with undulating pitched rhythms, and an aggressive electronic part. These movements also contain virtuosic solos in the cello, guitar and flute parts. One section features a drum with the flute, guitar, and cello perform much like their ancestor instruments from the Middle Ages. While the flute is normally considered a high pitched instrument, the third movement uses an alto flute to explore a darker, more melancholy side to the flute.

This project took about a year to complete. I spent seven months writing it, and the Pique Collective spent an additional four months learning to play it. The Pique Collective, whose vision is to bring new music to alternative venues, reached out to Black Cherry Puppet Theatre to create visuals for the piece. Puppeteers Michael Lamason, Jeanine Padgett, Emily Schubert, and Alissa Glenn crafted large, abstract shapes and choreographed them to the music.

In addition to "Mountain Piques," I've written several other pieces for small ensemble. My personal favorite of these is "Lake Pontchartrain," for string sextet. It captures the stillness of the lake, its cloudy days, and its surrounding bayous, combining it with emotions of sadness, longing, and nostalgia.

"Escape," for bassoon quartet, has been performed in New York, Maryland, Tennessee, and Spain. It's overall a bleak piece; the dark registers of the bassoons and a hulking contrabassoon solo are mixed with arcs of wailing and quarter tones.

During COVID, many musicians took their music online, performing together virtually but apart physically. This year I had the chance of working with the Civitasolis Quintet and Music&Friends Chamber Ensemble to write three shorter works: "Deep Purring," "All the Little Kittens," and "The Dragons are My Children."

I've written several longer works that haven't been performed, including an electroacoustic reed quintet, and a quartet for piano, clarinet, violin, and cello.

Music for Solo and Live Electronics

I'm passionate about composing music for one person and speakers. Normally, the piano accompany a musician or vocalist. Not all venues have pianos though, and I wanted to explore a different way of accompanying instruments.

My longest piece to date, Pluto, is written for just one clarinet, and one person operating electronics. Playing into a microphone, the clarinet interacts with live electronics to create a one-person orchestra. With techniques such as looping, delay, pitch shift, ring modulation, and aliasing, the clarinet creates a living surreal electroacoustic environment symbolizing interstellar space.

I repeated this process in Enkidu, for baritone saxophone and live electronics. I have also been commissioned to write a piece for bassoon, and one for alto saxophone; recordings will be released soon.

I wrote "Kings Highway / Stillwell Ave." for piano in 2007 after living in New York City for a year and a half. I had essentially failed at my first job. Luckily I found a new one in Virginia, but the process of moving out was extremely cathartic. New York had been my home.

The last night I spent in my Queens apartment was nightmarish. Heat radiators were going off, water was dripping from a faucet, and I heard sounds in my own head. I was also hyper-aware of the sounds I heard when I walked out of my last day at work. The relief of never having to return quieted my mind enough to hear the sounds of New York's traffic and children laughing.

After composing it and performing it at the Church of the Holy City in Washington, DC, Vin Grabill created a video to accompany it from hundreds of photos I took in New York. The video was featured at the Rosebud Film Festival.

I have a growing number of compositions that I perform using an apparatus of synthesizers, MIDI controllers, and computers. Many of these songs are short, loud, experimental, and written to be performed at underground venues.

Baltimore has a scene for people who crave new, interesting music. I've performed my solo work at Reverb, Bloom Bars, and a number of venues around the country. These works explore freedom of form, timbral variety, and lyricism in a way that's neither classical nor pop.

Early on in my composition career, I became hypnotized by the sound of vibrating piano strings. Most people distinguish a piano's sound by its attack. One day while I was experimenting, I recorded myself playing a note on the piano, and then edited out the attack so only the decaying string vibrations could be heard. I began building entire pieces by splicing together hundreds of recordings of piano strings, like a mosaic.

"Un Jardin" is a work for fixed media in three movements, which Vin Grabill later set to visuals. It has an extremely angelic tone, beginning with a repeating, warbly, hymnlike chord progression, and leading to an overwhelming climax. "Ceres," the second movement, is simply a cluster of every piano key at the same time. The lightness of the piano sounds turns the dissonance into a shimmering texture, highlighting some keys more than others to create melodies inherently connected with sound.

I continued experimenting with recordings of piano strings in "Pranayama," which sparsely features samples of synthesizer and my own voice to add a tinge of color to the piano sounds. "After the Storms," incorporates the sounds of electric guitar, handbells, windchimes, buzzing home appliances, and computer synthesis. It begain as a dance piece choreographed by Danielle Greene and performed at the Boyer College of Music and Dance at Temple University, also heavily uses piano string recordings. Later Vin Grabill made it into a video piece.