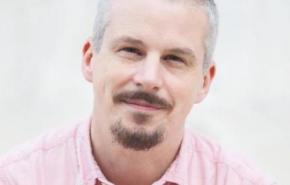 James Arthur was born in Connecticut and grew up in Toronto. He is the author of The Suicide's Son (Véhicule Press 2019), Hundred Acre Wood (Anstruther Press 2018), and Charms Against Lightning (Copper Canyon Press 2012). His poems have also appeared in The New Yorker, Poetry, The New York Review of Books, The London Review of Books, The New Republic, Ploughshares, and The American Poetry Review. He has received the Amy Lowell Travelling Poetry Scholarship, a Hodder Fellowship, a Stegner Fellowship, a... more
See 2021 $2,500 Baker Artist Award Winning Portfolio
View James's Resume

My second full-length poetry collection, The Suicide's Son, was published in 2019 by the Montreal-based publisher Véhicule Press.

Though I work mainly in free verse, I often think of poetry in formal (i.e. structural) terms, and I try to write poems whose meaning is determined at least partly by the repetition and organization of sound. Many of my poems contain rhyme and what I think of as “runs” of iambic or anapestic meter, but I’m very interested in trying to capture what I think of as a kind of asymmetrical beauty, so I often establish metrical expectations only for the sake of breaking them. I aspire to write poems that are rhythmically well-constructed, down to the level of the syllable, but also indivisible in their parts, so that the reader cannot easily separate the poem into discrete metrical feet or metrical phrases; disorder, or a pattern that is varied to the point of seeming disordered, is beautiful, from my perspective, and I want to convey that beauty rhythmically.

I think of myself as an oral poet, and write more for an audience than for a readership, though publishing is of course an important part of my professional life. When performing, I recite my poems from memory.

Praise for The Suicide's Son:

"In The Suicide’s Son, we encounter [Arthur's] mastery of individual lyrics, but the collection is more than the best of his journal publications. It gathers in the mind as a single text as Arthur both poses and answers questions about the ideas, objects, and traits we broadly inherit—as family members, as members of a culture, as animals—and how we respond to the often troubling content of that inheritance."

"Nothing is inscrutable or imprecise. It all adds up to maximum impact conveyed directly from the words to the reader’s brain, and via brain to heart."

"Rootlessness ebbs and flows, all while the cogs and underpinnings churn and grind each poem into a solid object that transcends the quotidian. These words are ordered to last."

"The poems in James Arthur’s new collection, The Suicide’s Son, convey a mastery of resonance and form while dealing with topics that are relevant and real."

Some Thoughts on Ambiguity: Mystery, Truth, and Lies

I've recently begun writing nonfiction -- some personal essays, some essays on the subject of poetry, and a few pieces of writing that combine these two modes.

"Some Thoughts on Ambiguity," the first of my essays to be published, appeared on the AGNI blog in two installments.

My chapbook Hundred Acre Wood was published in 2018 by Anstruther Press in Toronto. The collection is loosely organized around the theme of fatherhood.

Individual poems in Hundred Acre Wood first appeared in The Academy of American Poets’ Poem-A-Day project, The American Poetry Review, The Best of Canadian Poetry 2016, Hazlitt, Little Star, The New York Review of Books, The Southern Review, and The Walrus.

Charms Against Lightning is my first collection, published in 2012 by Copper Canyon Press as a Lannan Literary Selection. As a group, the poems describe a gradual change from being a shadow to being a human being.

Charms Against Lightning was shortlisted for The Believer Poetry Award and also for the League of Canadian Poets' Gerald Lampert Award.

praise for Charms Against Lightning:

"Few debuts have been more hotly anticipated than James Arthur's Charms Against Lightning. His work leading up to Charms garnered nearly every award, fellowship, and grant an emerging poet could hope to win. And for good reason: in an era where poetry often amounts to little more than broken prose, Arthur distinguishes himself as an unusual craftsman, a practitioner of true vers libre."

"Arthur works his magic in lines that are tightly formed yet sculpted to flow and break for maximum effect. He summons the richness of everyday detail ... as a foundation from which the broader contexts of human experience take flight. And always there is sound, and rhythm. Keep these poems close for their poetic juju against the suddenness of life's lightning strikes, and for the forgiving melody to which Arthur choreographs the tender dance of being human."

"An entrenched strangeness exists in Arthur's work, derived not from linguistic hijinks but from common observations ... his tone is casual and confident, the effect slightly off-frame or out of focus, yet constantly arresting."

"Arthur's debut poetry collection, Charms Against Lightning, is so confident that is almost seems to have sprung fully formed from the pen of its creator, though the crowded acknowledgments page testifies to the fact that is has been many years in the making. It is worth the wait."

"Arthur is in awe of the transient, the unstable, the airy. In concert with this, his rhythms also float. Ever aware of the fragility of life and, beyond that, the instability and changeability of the whole universe, Arthur writes poems that gather and dissipate ... Arthur is a poet of big gifts delivered lightly."