Anna Fitzgerald is an award winning puppeteer based in Baltimore, MD with a Masters in Fine Arts degree in Puppet Arts from the University of Connecticut. She is the artistic director of Red Ball Theatre Company. She has performed at festivals around the world including International Puppet Days in Izmir, Turkey, The Puppeteers of America National Puppetry Festival, The Green Mountain Puppet Festival, Baltimore’s Artscape and Whartscape, EnvisionFEST Hartford, and in theaters around the country. Anna began working in puppetry as a company member in Liebe Wetzel’s Lunatique Fantastique in San Francisco. She co-founded UnSaddestFactory Theater Company in Baltimore producing, directing and performing in several original plays and organizing and producing three sold out Ten Minute Play Festivals. She studied Theater at The Baltimore School for the Arts, Mime and Social Theater with The San Francisco Mime Troupe, Justice at American University, and Clown at the Clown Conservatory of San Francisco. She continues to write and perform her own puppet work on stage while dabbling in short stop motion films and exploring the new possibilities of visual arts.

Anna was an artist in residence at A Studio in the Woods in New Orleans and part of the Mead Theater Lab Works-in-Progress series in Washington, DC. In 2016 and 2019 she was awarded an Individual Artist Award from the Maryland State Arts council. In 2016, she was awarded a Family Grant from the Jim Henson Foundation for her puppetry and clown show for families, Adventures! She was an Emerging Artist at the2013 National Puppetry Conference at The Eugene O'Neill Theater Center and a recipient of a Puffin Grant, both for her production of Reverse Cascade. She was also the recipient of the 2014 Jerry Rojo Award for Production Excellence for Reverse Cascade at The University of Connecticut. In 2016, Reverse Cascade toured the world and was featured as part of The Flint and Tinder series at The Tank in New York City, International Puppet Days in Izmir, Turkey, and at the Detroit Institute of Art.

Anna teaches puppetry to young artists around Baltimore with Black Cherry Puppet Theatre and in the Baltimore School for the Arts TWiGS program and has lectured and taught workshops at colleges and universities including University of Connecticut and Goucher College. From 2014-2017, Anna was also a proud board member of UNIMA-USA, promoting friendship and understanding through the art of puppetry.

Red Ball Theatre Company is based in Baltimore, MD and creates works of original theater full of puppetry, physical comedy, and simplicity. We believe in the life of objects and that stories are the most valuable things we have. So we use objects to tell our stories. We perform new works for adults, as well as weird shows for weird kids. More information can be found at www.annafitz.com 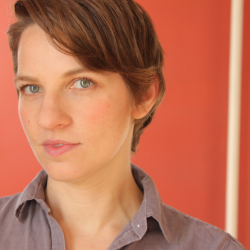