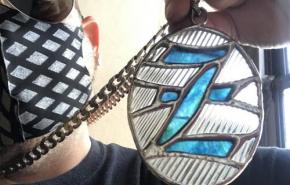 Zach has worked in a lot of mediums over the years. His parents are both artists that met at MICA in the late 60's, and made their livings as graphic designers until their retirements. Zach has studied drawing, painting, and design at MICA and Towson State, and then apprenticed with and worked for world-renowned glass artist Saul Farber, doing wholesale and retail stained glass production for most of the 90's. After his mentor's sudden death and the closing of Farberglass in 1998, he started doing... more
View Zachary's Resume

The first stained glass panel I was commissioned to create in almost 20 years is also the largest piece I’ve made since returning to the craft. When I told my massage therapist that I was seriously considering a career change, I had forgotten that she already owned a small piece I had made many years ago. When she reminded me of this, and then asked if I would like to make a window to help attract attention to her new business location, I was both surprised and very grateful, and couldn’t help but feel that it was a sign that this was the path the universe was encouraging me to take.

After first discussing how it should be presented, we decided on a hanging panel that would be centered in the largest of the 3 windows to the room she worked in. This particular room not only needed more privacy from the foot traffic adjacent to the location, but also received the best afternoon light and would be most visible from the street when illuminated from within at night. We also made the decision to make it a hanging panel so that it would cause the least amount of damage to the rented property, and could more easily be moved if she ever needed to change locations. The size of the piece was also a concern, because to fill the entire window would be more expensive and require a larger work surface than I had available, and be that much more difficult to transport to and install at the location. We then agreed that a 24x45” panel would both satisfy the requirements of working as a privacy screen and advertising tool, as well as fit nicely on the 30x48” glass tabletop I would be working on. After we worked all of this out and agreed on a price, I was given a deposit to purchase the necessary tools and supplies I would need to begin creating the panel.

The next step was designing the piece, and I began with the existing logo she had already commissioned a graphic designer to produce, and was also already having painted on an exterior wall of the business. The logo itself is a mandala made of 12 water drops and the word “indu”, which means “sparkling drop” and also references the moon, so I began envisioning a design that would include both themes as the central focal point. I was also asked to incorporate the repeating leaf pattern from the background of her business cards/promotional materials as the pattern for the background/sides of the panel, which I first modified to work as a repeating pattern with the overall consistent line thickness necessary for translating into stained glass.

Below are "behind the scenes" images (click photos for detailed descriptions) of the design and execution processes I used to create a hyper-detailed stained glass portrait of Christopher Wallace (a.k.a. Biggie Smalls/Notorious B.I.G.) from the iconic Photobooth series by photographer and filmmaker Barron Claiborne.

While most of the physical steps are traditional methods that have been employed by other stained glass artists and craftspeople for many years, I have developed some of my own techniques for designing the templates that I create digitally, which allows me to much more quickly and faithfully reproduce the images and photographs my portraits are based on (as well as design from scratch), as opposed to old school methods with pencil and paper. I am sharing these techniques not only to show the amount of time and effort it takes to create this type of art, but also to share with other artists/crafters how to do what I am currently doing if they desire to do so (although when I showed a photo of this panel to one of my glass suppliers and I told him how many pieces were in it after he had asked me it’s size, he just smiled and said “You’re insane!”).

When I originally learned the craft from my mentor Saul Farber in the mid to late 1990’s, the designs began as sketches or drawings or photos of the image, which were then transposed by tracing onto or carefully drawing them on graph paper, to the same proportions as the final piece using the grid of the graph paper to then create a larger grid on the physical paper template used to cut the glass. For example, if the final size of the piece was going to be 24x48”, it could be drawn at 1/4 scale on top of a 6x12” block of 1/4” squares, making it much easier to exactly render by hand the final template.

After Saul’s untimely and sudden death in 1998, his family (none of whom were local) liquidated and closed his business, and despite having apprenticed under and worked for him for 5 years and learning almost all I could about stained glass fabrication, I had not yet learned the underlying business knowledge necessary to take over his position as owner and keep Farberglass running, as was our original long-term plan. (If you would like to know more about my mentor Saul Farber, here is a nice article about him ). Needing immediate employment I then spent the next few years doing whatever work I could find and eventually became a full-time custom picture framer, while still continuing to create and sell my own stained glass work. I eventually stopped making it though because by the end of a day doing production framing work my hands were not able to handle the rigors of stained glass production as well. Needing another outlet for my creativity, I began to experiment with and study digital photography and video production, all of which I eventually phased into doing full-time as a freelancer after leaving the custom framing industry.

Fast forwarding to last year when the pandemic hit and I was forced to close the photography studio rental business that I had co-owned for the last 3 years, as well as having to put my other endeavors on indefinite hold, I made the decision to start doing stained glass again, which I had been considering for some time but had not yet had the time and energy to re-invest in. Since I now needed to find a way to support myself that didn’t involve interacting with anyone else in person for any extended periods of time, I saw it as an opportunity to restart a previous career that had also been cut short by circumstances beyond my control.

If you have it made it this far through these last several paragraphs of long-winded run-on sentences, the reason for my typing them has been not only to give you a clearer understanding of how I arrived at this point in my very storied artistic career, but how I am now applying the knowledge and perspective learned from these life experiences and working in other mediums to elevate and innovate the craft, and be able to manifest things that I never would have been able to accomplish without having had said experiences.

This was my first pet portrait done from a photograph, commissioned by a friend for his parent’s dog Sheba. I had previously only done one pet portrait before in the late 90’s, based on a painting my mother had done of her cat Magic in the 1970’s.

The first challenge with this piece was figuring out how to properly represent the image on a smaller and simpler scale (8x10”) than the larger and much more complex Saint Christopher portrait that I had just completed, and still be able to capture the essence of the subject.

This project was commissioned by a photographer friend, and is my first plant portrait. I cannot type that with a straight face, but it is indeed a portrait of some very specific plants, which were first seeded by my friend’s father.

The lillies have since grown, and have attracted a lot of attention in the smaller township where they grow, to the point where their location is frequently used as a backdrop for wedding and engagement pictures, and photos of them are not only currently used in the local paper’s lifestyle section, they are also prominently featured in the front page masthead.

I was first sent photos of the masthead images as a reference and asked to recreate the two top lillies, but I really wanted to get them exactly right, so I requested that my friend do his best to get a high-resolution copy of the original photograph to work from, which he thankfully was able to do.

Birds of a Feather

This was a deeply personal project to me and my father Scot, who has given me permission to share it.

When I was scrolling through his Facebook pictures trying to come up with an idea of something special to make for him, I came across the illustration in the the first photo which was done in 1992 by his life partner Jim, who passed away in 2016, which I also just learned today was based on my grandmother's (who passed last year) back yard at the time.

Jim wasn't a trained artist like my father is, but his drawings were always highly appreciated by Scot, and now by myself much more so than when I was a teenager and had ignorantly dismissed them as being too child-like to be of any value.

So just imagine my surprise when I realized that Jim had designed a small stained glass piece as the focal point of one of his amazing drawings a year or so before I started my original apprenticeship, and that I could make it a reality almost 30 years later.