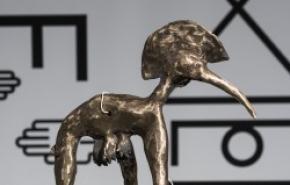 victortorres.art Victor F M Torres is an interdisciplinary and intermedia artist born in Rio de Janeiro, Brazil. He currently lives between Baltimore, Maryland, and New York, NY. Torres is a visiting assistant professor at Stevenson University. Torres holds an MFA in Intermedia and Digital Arts from the University of Maryland, Baltimore County (UMBC) as well as a B.A. in Socio-Cultural Anthropology, from the same university. Torres is the founder of Vector Voltage Publishing, curator of LIGHTHOLE, and... more
View Victor's Resume

Language Writes Myth Writes Reality: Or, How Does the Acculturated Body Take the Role of Culture-Maker?

Myths are taught and taken as values through enculturation, which serves to socialize the individual. When a specific set of myths or “common-senses” and “ways of seeing” are taught to and expected from a large group of individuals, the outcome, to my mind, is a form of colonization that is often disguised as acculturation or socialization. Myths are devised by generations upon generations of stories, which form cultural constructs divulged mainly through language, or a collection of millennial sounds acting in conjunction with their visual representations and functioning as capsules of meaning.

I believe that examining the historical trajectory of sounds, their meanings and notation systems – i.e. writing systems - is pivotal not only to understanding and tracking how human perception has changed over millennia, but also to how we can re-write societal norms—how we can re-colonize, if you will, the phenomenon of colonization. Throughout my work, I explore the experience of an acculturated body (also known as the diasporic individual, or immigrant) taking on the role of the protagonist, turning colonization on its head; something Hollywood could never grant Carmen Miranda – one of the only lasting representations of Brazil outside of Latin America – despite her arduous attempts.

In my research, I choose the phrase re-colonize and thematically, I take an anthropological perspective to call attention to and open up space for the creation, as well as the active dissemination of new myths which allow the immigrant, the marginalized, the non-normative to become the protagonist.

Contemplating the historical trajectory of sounds and the evolution of their notation systems serves as a tool for re-programming language. The result is a language I have constructed that resembles the grammatical and morphological makeup of ancient languages. I explore these languages through intermedia installations, touch-sensitive conductive sculptures, and durational performances that have constituted the main forms of dissemination of my research.

Rite of Passage on Death of Innocence

As a part of the Transmodern Performance Festival of 2012 artists curated by Rebecca Nagle created an all immersive dinner theater experience involving miniature foods, occult ritual, and drinking wine out of ducktape alien computer utters.
I was responsible for he waiter staff costume design and fabrication. For the cocktail portion of the dinner I performed "Breasted Cocktail/ The Last Computer" were I embodied the last computer of a distant and dying civilization overtaken by psycho-cultural imperialism. I made direct references to the neglectful relationship between American mainstream media and the Lusophone world.

Photographs from What Weekly Magazine
Courtesy of Philip Laubner

Occupy Baltimore.
Tactical Magick performance ritual.
Participants Painted abstract representations of their intentions with regards to the Occupy movement. Participants were also encouraged to make and/or bring objects to be left at the fountain to symbolize their hopes for the future of the moment.

Mummification has been found to be a recurring element of cultures in every continent from Africa to South America. In this work I explore the ritual of mummification as an act of self preservation. While usually associated with the preservation of the body after death, mummification is represented here as a way to preserve life and as catalyst for the rebirth of the self.

“Nothing served to ‘assemble’ the different peoples and vernaculars more than capitalism, which, within the limits imposed by grammars and syntaxes, created mechanically reproduced print-languages, capable of dissemination through the market.”
— “Imagined Communities” by Benedict Anderson, 1983

I believe that contemporary art is too often informed by complacent cultural consumption. My aim as an artist is to question and even reverse my consumption of prefabricated cultural mechanisms. Instead, as a person socialized to relate to and communicate with other persons (as all persons are), my aim is to engage in actively and consciously consuming cultural systems of communication in order to bore into and unpack them, thereby gaining a deeper understanding of how meaning is made.

The process known as socialization has an efficient way of perpetuating itself by making cultural attributes and associations subliminal or subconscious. Cultural norms, which constitute the very bedrock of society, are the strongest when consumed and reproduced subliminally. For that reason, I need to know where every phoneme that I use comes from. For example, the sounds that make up the word elegant, where do they come from? What other words use these sounds?

Socialization works on one individual just as colonization works on a group of individuals. My work, then, is an attempt to re-socialize, re-colonize, and re-appropriate myself and in so doing, to create a potential model for a new (or at least different) culture.

My efforts are illustrated through the pieces that follow:

*leikw — is a video triptych of my mouth reproducing phonemes while exploring the many paths of alliteration by which meaning comes into being. These videos are simulations of the trajectory that phonetics have taken over time through the de/re-contextualizations resulting from human migration. For example, in “Elegant,” I start incessantly repeating the PIE (Proto-Indo-European) word *leikw —. The repetitions quickly morph into eleg- which transforms into the Latin eligere, subsequently transmuting into elegans – elegantis and finally the modern English word “elegant.” *leikw – is the Proto-Indo-European word for “inheritance,” which is phonologically closely related to the Latin root eleg-, meaning choice.
In this case, “phonologically related” means that the most distinctive sounds are the liquid alveolar sound l followed by a velar stop kw or g. The piece explores the notion in comparative linguistics that sounds using the same oral muscles or cavities are often interchangeable. These modifications happen due to cultural influences, migrations, linguistic assimilations (i.e., oral translations), and finally genetic mutation. *leikw – is an attempt to illustrate clearly the process used to identify key sound forms in modern languages in order to show how units of sounds that serve as building blocks to the words we use today have pre-determined meanings constructed through a long history. The central purpose of this exercise was the development of a new representation model for language and concepts.
Now, you may wonder, what is the connection between “inheritance” and the adjective “elegant”? To answer that question, we must try to transpose ourselves into the environment in which the Proto-Indo-European sounds originated. The experience is purely conceptual by nature, but it does yield a rather clarifying observation: Inheritance comes with privilege, which in turn produces the luxury of choice. In an abundance of choice there's a game or protocol that is cultural by conception. The ability to understand this game and work it, making the “right” choices, becomes a marker of elegance.

This piece is a triptych of prints of the same poem each in a different mode of representation. Each concept has been meticulously translated. It introduces Om (?), the Vedic concept for the sacred and eternal hum of the universe, as a verb. In highly reductive terms, the verb to om could be equated to a metaphysical aspect of the English verb ‘to be.’ The title is an homage and reference to Joseph Kosuth’s One and Three Chairs, 1965.

Syllabic System of Sounds Table 1 is central to the development of a new model of representation for language and concepts. The symbols listed are elements that when put together make concepts much like words and letters.
The first column on the left comprises a list of representations of single consonantal phonetic sound units. The top row is a list of single vowel phonemes, which are the unrestricted flow sounds (ah, eh, ih, aw, oh, ooh, and the diphthongs au and ae). Consonants provide a mold for unrestricted vocal cord movements, creating other phonological units such as syllables. All other signs on the chart are combinations of restrictions followed by unrested sounds, creating perfect syllables or a consonant followed by a vowel. For example the second row reads: B’, BA, BEH, BI, BAW, BO, BOOH, BAU, BAE.
Syllabic System of Sounds Table 1 represents the ultimate colonization and peak refinement of once finger-painted symbols in ecstatic performance based on ancient archetypal possession rituals and autohypnosis. Now the language has been completely codified, unified, and homogenized in order to propagate ultimate trust, however thinly veiled it may be as one-sided colonialist control. Matt Mullican’s process and craftsmanship serve as an important point of contemporary contextualization for this piece in particular.

Informed by Wittgenstein’s “Lectures on Aesthetics,” this exercise explores the relationship between morphology, syntax, and translation.

Wittgenstein, Ludwig. “Lectures on Aesthetics”. in Philosophy of Art and Aesthetics: From Plato to Wittgenstein, ed. Frank A. Tillman et all. (New York: Haddon Craftsmen, 1969).

20 min solo performance
This work was presented at Mix NYC in November in New York City. The artist started the performance with a series of preparatory physical movements. The physical preparations were followed by used of ecstatic devises, many derived from traditional possession rituals especially Brazilian Espiritismo. The artist then dips his hands in a can of acrylic black paint and writes a text on a 8' by 4' white plexiglass. The text consists of carefully studied symbols that corresponds to phonetic patterns in proto-indo-european, ancient Egyptian, classical Greek, and Sumerian.

Creation of a sacred space through performance and the cutting down of studio walls and exhibiting the parts as artifacts in two galleries.
Auto-mythographic exercise.

The piece was executed in the time span of four months. It was born as a performance piece were I read and opened a pile of mail accumulated from two previous years. Those years were marked by the acquisition of an American Citizenship and financial independence from my parents. These, among many other events, triggered a cascading and seemingly infinite paper trail - documents which to some are quite successful at translating me to better known institutions. The documents were stapled on a studio wall, creating a what struck me as a shrine to the 'translation of the self into representation that is consumable by institutions'. In my own system of associations I call the 'stuff of institutions' 'On' so I was compelled to write an 'ode' to 'On' over the stapled mail.

An intriguing characteristic of institutions is the tendency to periodize an event instantly in the form of a record, document. In this piece I carry that notion through cutting a wall of my studio and transporting it first to Area 405 for a group show and after to EMP collective for another group show. The wall had to be cut in half in order to fit through doors and trucks for transportation. The piece transformed every time it was moved, it's dilapidation makes it almost an archeological relic of layers and layers of W-2's, Bank Statements, Cat's castration, and things of the sort.

Museumfication is more of an experiment with aura asking questions such as: after you remove an architectural element from its context, what remains? After you remove culture, what remains of meaning? To what extent can documents such as W-2's, bank statements, bills, diplomas, accurately describe the individual whom these documents are attempting to encapsulate?