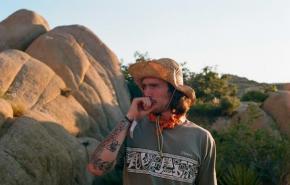 Under the moniker Grimeography, Tyler Grimes (b. 1994 in Wilmington, DE) conceptually integrates a multidisciplinary approach as to ponder provocative paradoxes, curiosities, ontologies and our place in reality. Pulling influences from various schools of thought, he invites his viewers to manifest ideas that may help them discover more about their own subjective experience of being.  Grimes has a background in multimedia advertising design, received his BA in Mass/Visual Communications from... more
View Tyler's Resume

Herding the Gaze Away from the Pasture

In the real-world, Grimes allows the spectator to examine their own perceptions of reality in an art gallery containing rendered versions of natural resources, static TVs and reflective surfaces. Once within the VR space, these same objects are repeated in the context of a virtual art gallery. The spectator eventually meets a mediated view of their real self through Grimes’ utilization of a live video-feed mechanism. Now-a-days, people are accustomed to finding their sources of reality, culture, information and purpose via pieces of technology. The responses to which are often consumption without speculation. In times of climate crises, diminishing natural resources, meaning crises and questionable sources of the “real reality” as it’s disseminated to us; the piece fosters a self-reflective experience for social change, conversation and contemplation by probing both the nature of reality and the reality of nature. In this project, Grimes points towards an experience of non-duality between earth, technology and self for the spectator. In the process he sparks curiosities surrounding phenomenology, systems of value, the attention economy, simulacra and historical-technological canons. His intent is to allow the spectator to see themselves as custodians of the earth's very real resources and to shed a light of mindfulness to the way some media imagery can misdirect us from this call to action. More photo documentation can be found here: https://www.grimeography.com/m-f-a-t-h-e-s-i-s

Inspired by metaphysical notions surrounding the role of the observer in knowingness, similar philosophical conceptions in phenomenology, media theorist Walter Benjamin’s insights into the “aura” of an art-object, Allan Kaprow's wisdom surrounding "happenings" in the art of everyday life, the long-form performative works of Tehching Hsieh and Olafur Eliasson's perception-questioning installations; this piece documents the mentation process of the spectator. The art-object becomes the spectators sensorial and perceptual experience of viewing a zen-like nothingness-somethingness. In modern times where NFTs, virtual galleries, the near-infinite technological reproducibility of art-reality and our mediated viewing experiences of it have seemingly diminished our pleasure of perception; this piece intends to question the intrinsic value of the spectators gaze by installing an empty pedestal and documentation equipment as the implied work of art à la The Emperor's New Clothes. Don’t forget to take a picture! The audio portion has been appropriated from a few different documentaries surrounding some of the topics outlined in the statement above. The docu-formance: 1. The artist enters a gallery space everyday to photographically document the installation 2. Afterwards, the artist leaves the space; leaving the documentation equipment posed 3. The artist returns at close to take down the equipment as to prepare for the next day 4. The performance’s duration lasts for the span of the exhibition 5. ??? 6. A docu-mentation documentation video and photo album are made 7. Profit

The city of Baltimore echoes in the background. During the ideation of this piece, I drew inspiration from Luigi Russolo’s “The Art of Noise” - in which he alludes to the lack of silence in our modern-industrialized world. I intend to showcase this forgotten sound of silence; it’s essence. If we could listen to our own listening, what would we really be listening to? The sound itself, or our interpretation of the sounds as they vibrate our eardrums? If we could hear listening, what would it sound like? Similarly inspired by Graham Harman’s “The Third Table” and similar ontological speculations surrounding the subjective act of observation; this piece implies an audio source through the use of precariously placed microphones juxtaposed to a silent video of people listening to nothingness-somethingness.

From Farm To Table

*updated documentation coming soon* So... how do you feel about all this? In this piece people, food, the medium itself and the spectator are interviewed as if to ask what they think about the reality of the foods we consume as presented through the commercial media associated with their production. ​ Awareness dialed down to the granularity of the self and what we allow the body to consume in the forms of diet, dogma, media and our desires are investigated. Inspired by various video artists, existential philosophies, artificial intelligence/machine learning, mysticism and Michael Pollan's take on human desires; these food and reality-production processes are probed in hopes to remind the viewer of their relations to these processes.  ​The piece premiered at Marketview Arts in York, PA in January of 2020.

“...isn’t that ugly! I must take a photograph of it. Even if someone did say that, all it would mean is: I

find that ugly thing beautiful... by revealing to others the living world around them, one can see things

(especially what everyone has already seen) in a fresh way... the highest vocation of photography is to

Grime (noun): “Dirt, soot, clutter, or other filthy matter, especially adhering to or embedded in a

surface”. Grimey/grimy (adjective): “Full of or covered with grime; most times an object or in some cases

a person”. -ography (suffix): “a field of study, a particular area of interest; a process”.

Grimeography (noun): The study, appreciation, and observation of grime in its various manifestations.

Exploring my birthright, I choose grimeography as the moniker I operate under; which this

book also bears the name of as a conscious effort to learn about and appreciate grime around me.

The decaying medium-message of analog film photography suits this motif well. Through this filmic

decomposition and decay are given context to. They say all photographs are inherently beautiful through

the beholder. Therefore, grime is something that I find not only poetically symbolic, but something worth

photographing . Through the assemblage of imagery that follows I attempt to document that grimeyness

via a portrait of an absurdly anthropocentric culture and the human non-human agents affected by it.

Decay and decomposition are often overlooked and underappreciated natural processes which

reliably and cyclically bring about new life. Fungi, bacterium, and the various microorganisms that

inhabit an aging building point to this inherent plan and intelligence in nature. These life forms are

sterile environments. They are much like the process of composting leading to nutrient-rich soil over

time. Nature reclaims these man-made structures as if it is feeding on a diet of brick and mortar. This

to tame nature. I say let them decompose. Wild urban plant growth shouldn’t be seen as a sign of ruin;

but rather a sign of renewal - a second chance. Through the reframing of nature’s narrative as that which

was once in control into that which has always been in control; the book ends with a reminder of this insight.

Informed by Eastern concepts of karma, ahimsa, and rebirth, I intend to bring to mind the commodification of the earth and the not-so-naturally produced food-resources we consume.
As these resources decay, so do we; but out of this realization of impermanence and decay comes a new perspective of life.  A video version of this concept was also produced.

Too Fast To Fast

Is society going "too fast to fast"? Slow down! This alternative narrative video piece serves as an investigation and observation into the marketing campaigns that fuel various food-industrial complexes and the process itself of how some of these foods are artificially produced. It pokes fun at the plethora of unpronounceable artificial ingredients, the diet that ensues from these ingredients, consumerism culture, and how the media/government have not told the full truth to it's people in terms of the healthiness and contents of various food products. How "real" is the food we are marketed to eat? How far can you trace back to the source of your food? This "standard American diet" is then placed in contrast with a more modest and humble approach of a "fasted" lifestyle. This approach lends itself more towards spiritual growth through taking the time to be mindful of marketing tactics (bright colors, appeals to the different senses, use of characters and slogans, competitive pricing, addictive ingredients, etc...) and one's own body. By preparing a meal with nonexistent ingredients, the stark contrast is shown between the two processes of approaching nutrition. The practice of fasting for spiritual and nutritional purposes goes back thousands of years through various paradigms and practices. In modern times where obesity, diabetes, mental disorders, and various cancers are the selectively reported epidemics plaguing humans, could this be a method to help us return closer to the source of nutrition itself?