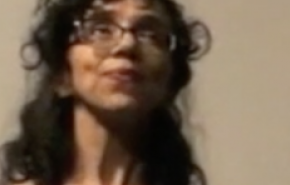 Theresa’s creative focus for over 25 years has been in Milwaukee, WI and Baltimore, MD, where she has been organizing as well as writing, directing, producing, touring, and performing in plays, solo pieces and films. She collectively founded Darling Hall in Milwaukee where she was a member of the “Tingle Troupe,” a group of four women who hosted many variety shows called Tingle Showcases. In Baltimore she helped to initiate and organize two shows called Kidult: the Kid and Adult Show! which emphasized... more
View Theresa's Resume

This theater piece was created by Theresa Columbus and 8 writer/performers: Izaak Collins, Cliff Doby, Ruby Fulton, Myles Hamilton, Caitlin Weaver, Jacob Zabawa, Francisco Benavides and Allison Clendaniel. Their process challenges the traditional roles of writer/director and actors. The play contains short plays, performance art, and songs, producing the effect of a surreal vaudevillian variety show, even though several narrative and formal through-lines connect the “variety” of pieces. Different theatrical forms bump up against and expand each other, splashing into the poetry of everyday conversation.

8 Short Plays is a surreal vaudevillian variety show. The plot of this poetic dialogue is performed by an ensemble of 8 and held together with a wild emotional logic. These passionate stories explore relationships to memory, art, and song.

A live experiment holding the audience responsible for absorbing a universe where frolic & logic exist together, the cast employs humor and storytelling to unfurl unexpected connections and the wonder of humans on stage. In the process traditional forms are celebrated, taken apart, and reinvented.

Perched at a Table in Pittsburgh

Written and recorded by Theresa Columbus
Video recording by Dan Zink and Andy Shenker
Performed at the Whole Gallery and the Undercroft, Baltimore (2019)

We encounter Our Character early one morning writing a performance piece in Pittsburgh. Or are we at that actual performance when we encounter her? Well, one thing is for sure, amazing and odd things just seem to happen when she sits down to write. Right before her eyes, with an audience watching her, a gray furry cat has run up a tree and is staring right at her. A large red cat is right behind him, but can’t climb as high- what will happen? It is a little harder to write when other people are in the kitchen, but don’t feel bad- no really, you are invited; she may have seemed a little unwelcoming at first, but there must have been some mix up with the time. Together you can explore what an audience really wants, the importance of thinking events over, the nature of seduction and confidence, and subtleties of creating dance moves in the morning. So, really, you don’t have to leave.

"Artist House" (with a little wink to Judy Chicago's Womanhouse) is a tale of a woman in her studio/ home/ on a stage where she encounters and faces head-on many challenges: writer's block, self doubt about her stand-up comedy routine being funny, audience members trying to get too intimate, a visit from a friend who won't give her any phoophoo nuts, exposing her intentions too fast, and destroying things she deeply cares about. Luckily, she is able to "wriggle her way out of ensnaring self doubt with some music," and keep it moving. Speaking and singing along with her prerecorded voice, the premeditated mixed with spontaneous quality of her words is magnified, as is oddness of a performer speaking thoughts directly to an audience.  Through speaking, writing, singing, dancing, and a funny costume change, the artist celebrating the difficulty, strangeness, and intense joy of creating and connecting.

A Flood of Emotions

What was so strange about the dress in the dream? How can your friends appear at your desk early in the morning? Will there be a flood of emotions? How do you write a song of deep friend love to someone? Can you over-analyze humor? What happens to a dream when you write it down, and what happens when you perform a play on one Wednesday night 25 years ago and it is deep?

First performed as part of the Late Night Series at Psychic Readings in 2016, then at Fields Festival in Darlington MD, and finally at the DC Arts Center in 2017, "A Flood of Emotions" attempts to answer these questions as it bounces back and forth between the studio where the play is being written and the bar the night before that inspired it. People bond through doing and making theater, and also by loving their friendships.

“Love Trilogy” is a collection of 3 short plays written within a year’s time, navigating the sheer joys and the huge doubts and frustrations that can accompany romantic relationships. In the first play, “I Will Dance for You,” rejoicing in Joni Mitchell’s racier lyrics and bursting with giddy optimism, the artist (Columbus) and her lover (Aaron Smith) act out her thoughts about the relationship. She puts her words in his mouth, but at the same time often quotes him, putting his words in her work as well as in her mouth. The two act out their own prerecorded voices, and play with the trope of musical theater.

The second play in the trilogy is entitled “New Years Day 2015,” and chronicles one of the saddest and most yearning days of their 5 year relationship. Throwing away a little piece of nature from her hometown he had given her on a walk links her to the act of destroying precious things dating back to her earliest memories. This scene takes place between her and a good friend (her writing? her conscience? …or maybe a good friend.)

The third play in the trilogy, “The Second Dawn of the Year,” speaks to the poetry that follows these most intense relationship days, the artist reaching for words to help express what seems like volumes of conflicting emotions. Technology is a metaphor for emotional difficulties, cardinals and shadows metaphors for poetry and what works. Smith sings a song that he wrote in the first year of their love, and explore the way words inspire and resonate and adhere to people as they become part of each others’ lives.

The Refrigerator is Making Crazy Noises

First performed at the Holy Underground in 2014, then on tour in Pittsburgh, Rochester, Toronto, Quebec and Providence.

The Refrigerator is Making Crazy Noises reflects an arrangement of thoughts a person has when inspired in the middle of the night. These thoughts are stylized and self conscious of the act of writing, and contain musings on editing, promises to self, fashion, and not being in love with everything. With a recurring mystery punchline "This is a full term baby!" and other lines delivered sporadically, we watch our performer navigate through common and uncommon phrases with an urgency to translate something. Garnished with song, dance, and even a flailing sock puppet, she narrates these phrases and also connects with the audience by talking about and delivering letters to them.

Rooms Play was an enormous undertaking by the Copy Cat Theater and the artists that participated. The installation/performance stretched across two large art spaces (The Whole gallery at the H + H and the Current gallery) with a walk in between the buildings. Audience members went through 22 rooms 3 at a time, experiencing 22 different installation/ performances, which took them roughly an hour. The second year of its performance, Rooms Play drew inspiration from Joseph Campbell's mono-myth, each room representing a different stage of the story of the epic journey that has been repeated in many cultures throughout history. The performance had the theme of immigration, and the trials and rewards of being an immigrant in a foreign country.
In the room Columbus produced, the hero (audience members) had completed their major accomplishment, and had just been induced by the previous room's character to forget about completing their journey, but instead remain in the comfort of their newly acquired status as a hero in a new place. Columbus's job was to induce them to get back to what they had intended to do. She burst into a room where they had been treated as children by their kindly grandmother, reminding them that they need to be on stage: "the show is starting in 2 minutes!" They warmed up backstage, and then the performers let loose a rendition of a personal memory, all together, to an audience of a lot of papers with writing and drawings on them (and Columbus). The drama of being on stage and pouring out is what they needed to make their heroic decisions with a clear mind.

Decision is a Choice

You, the audience member, have entered the artist's private/extroverted space, which has the air of backstage, painter's studio, and bedroom. The artist warms up, draws, works on a piece of art made mostly out of fabric, dances, sings, and makes an audio recording of a play, all with the cherished company of mysterious, mysterious audience members. The audio play is about conversation, how things are very funny and not funny, clarity, and profound longing. The song is about how you can love a lover, friends, and doing different kinds of work.

"Chaza Show Choir" was created in 1999 as a 90 minute play with a cast of more than 20 that performed in Milwaukee, Detroit, Philadelphia, New York, and Providence. The play was written and directed by Columbus, with music written by Didier Leplae, Columbus and the Chaza Orchestra: Peter Barrickman, John Fletcher, Jen Emma Hertel, and Jason Tucker. A spirit of collaboration filled the process of creating this narrative over a 6 month period, with countless volunteers creating costumes, sets, props and offering ideas for the play. The group went on tour in the summer of 1999. Upon return, Columbus and Leplae immediately started the process of creating a film version of "Chaza Show Choir," a feature length black and white 35mm film which was released in 2004 and won a first place award at the Madison Film Festival. In 2015 "Chaza" was shown at the Anthology Film Archives in New York and the Charles Theater in Baltimore. 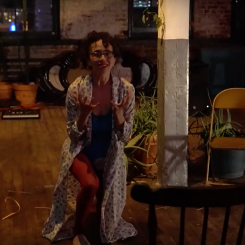