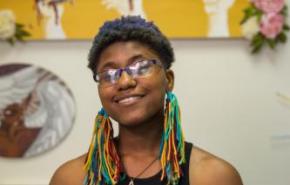 I started drawing when I was six and stuck with it. My Family always encouraged me to continue my art. With that encouragement, I created more pieces for everyone to to enjoy. As I got older, I started to experiment with more mediums such as acrylic and charcoal. It wasn't till 2018, that I figured out that Arylic and digitial photograghy were my strongest areas of visual art. However there is always room for improvement in my work. I've been included several art exhibits for M.I.C.A 's Fibers... more
View Tatiana's Resume

The three images I used are my friends and how I see them. I see the good in everyone and I see what the world has put them through. They're supposed to represent angels that have made it to earth, meaning that they're truly free. The last two are paintings of angels who want to have freedom and be on earth as well. However, that's why they're paintings because they're still in the other realm. The other realm represents society and the chains that they hold over the younger generation. When they reach earth, they'll have a more human form, but the other angels wouldn’t be able to tell who they are. I want to show how, we as a generation view each other, as free-spirited people.