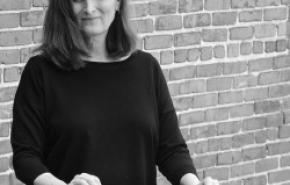 "Our Lady of the Perpetually Moving Pedals: An Interview with Susan Alcorn" By Hermione Johnson Susan Alcorn is no ordinary pedal steel guitarist. Self-taught and experimental, her music pushes through the bounds of conventional Americana to a realm all of its own - one which has won her accolades, as well as death threats. She grew up on Muddy Waters and classical, cut her teeth on stage playing pop music and country and western, before venturing into the worlds of chromaticism and minimalism;... more
See 2017 $40,000 Mary Sawyers Imboden Prize Winning Portfolio
View Susan's Resume

Evening Tales, Away With You, and current projects

This project contains music that I am currently working on, and music that was released this past year.

In April of 2016, Mystra Records released Evening Tales, a  vinyl record of solo music, my most personal album, I think, a record of pieces that I've recorded over the past few years, many of them written for people and places important to me. "The Healer" was written for my friend, the acupuncturist Diana Keener. "Blues for Chi-peh-tah", a piece commissioned by Baltimore's Single Carrot Theater, is an awkward conversation between a coyote, a desert finch, and a quest for meaningful connection. "An Evening Tale" is a sort of America folk melody that veers tonally to the left . "Sapphire" is experimental in nature with use of extended techniques. "Allegretto for David" is loosely based on Beethoven's Allegretto, but travels into some some different places. "The Bobby Bowman Stomp is a country-western inspired tune I wrote for my old friend, the late pedal steel guitarist Bobby Bowman.

Later in the year, an album that often featured my pedal steel guitar, the Mary Halvorson Octet's  Away With You, was released by Firehouse 12 Records. This was, in part, the culmination of a year of back and forth conversations between the composer and bandleader Mary Halvorson and myself - figuring out how to write for the instrument, what its strengths and limitations were, what octaves worked best, etc. Then I had to learn and later memorize the pieces. "Away With You" received significant critical acclaim and was on the top ten list for best jazz albums of 2016 in the New York Times (best album of the year), Chicago Reader (best album of the year), NPR, LA Times, The Atlantic, All About Jazz, El País (Spain), and Quietus (UK).

Also, in 2016 I did quite a bit of touring which, I think, is good for you as a musician; you're playing in a different place every night, driving miles and miles through mountains, prairies, deserts, sunrises and sunsets, with only the radio, CDs, and your own thoughts to keep you company. It is a profound disconnect from your daily life at home, but a precious opportunity to meet people in different places and different countries to share your music, to give a new voice in performance to whatever it is your art has to say.  Ideas and inspiration come at a moment's notice allowing you access to a deeper part of your self and a different shade to your performances. Some video from these tours is included in this section.

In 1987, Astor Piazzolla and his sextet came to Houston, Texas where I was then living, and I took the night off from a regular engagement playing in a country-western band to see him,  at the time wondering if it was worth a night without income. However, once Astor Piazzolla opened the bellows on his bandoneon (a button accordion used in tango music), I was entranced. And I was especially mesmerized by the little finger on the left hand of the pianist and the very low bass notes that punctuated the musical arrangements. That night has stayed with me ever since, and since that moment I've had a burning desire to transcribe and play Piazzolla's music in a solo recording. Thirty years later, I sometimes wonder whether that night in Houston was a blessing or a curse (perhaps a bit of both).

Over the years a lot had changed. I'd grown older, my approach to the instrument I play had markedly changed as well as my approach to music in general and life. This album is a bit of a testament to what has remained from that night and what has changed. In the winter of 2012-2013 I holed up in my music studio and began work on this album, often working 12-14 hours a day to transcribe the music in a way that would fit my instrument and also do justice to Piazzolla's musical vision. I chose four of his pieces, "Soledad" (Loneliness), "Invierno Porteño" (Winter in Buenos Aires), "Adios Nonino" (Good-bye Grandfather), and "Tristezas de un Doble A" (Sadnesses of a Double A - "Doble A" is a brand of bandoneon) and included one of my own pieces, a milonga entitled "Suite for Ahl". With the exception of "Soledad" and "Invierno Porteño", each piece contains extensive free improvisation based on the melodies, harmonies, and moods of the pieces. The Piazzolla pieces are solo, and Suite for Ahl is a duet with Michael Formanek on double bass.

This recording was released in March of 2015 on the Relative Pitch Label.

I've also included in this project, a live recording (not on the album) of my composition "Suite for Ahl" that I arranged for a quintet with brass, performed on May 30th, 2012 at the Issue Project Room in Brooklyn, NY. The musicians were Michael Formanek (double bass), Ryan Sawyer (drums), Darius Jones (alto sax), Steve Swell (trombone), and myself on pedal steel guitar.

Substratum is a collaboration with composer Jeff Snyder on a new music composition, the first ever, as far as I know, for pedal steel guitar and string quartet. Substratum was written for me and the Mivos Quartet and performed February 18th, 2014 at Princeton University's Sound Kitchen. The Mivos Quartet is an incredible group of musicians. We had one rehearsal two days before the performance and a short run-through sound check; this video is a record of what happened that evening. Music like this is funny - you learn, practice, rehearse for hours, sometimes days, sometimes months, stress about it on the day of, then after ten minutes or so, it is all over; time to move on.

These are clips of free improvisation performances where there is nothing predetermined. In some cases, I had just met the other musicians minutes before playing together. All music is composed spontaneously in the exact moment that it happens.

There is quite a freedom and beauty in this approach because everything is "in the moment". It's also perhaps the most difficult of all music genres to play well because you have to be mentally and physically awake, alert, and immediately responsive to what you hear, the result of which is seldom predictable from one moment to the next. However, the surprise that comes from this meeting of minds, hearts,  senses, and tastes can be truly magical.

In this project are performances with:

The self-released "Touch This Moment" (2010) is the first album I composed and recorded after moving to Baltimore in 2007. It includes a lot of the ideas that were going through my head in this new environment. On much of it there is more emphasis on sound as opposed to traditional melody. It also reflects my experiences. Perhaps, somewhere along the way, the music in here lost a bit of its sweetness, I don't know; but it's honest, and if nothing else, you need to be true to that.

And I Await the Resurrection of the Pedal Steel Guitar

This is an album I recorded in the winter and spring of 2006. It was released on vinyl a year later by the label Olde English Spelling Bee.

"Curandera" (Uma Sounds), which was originally released in 2005 (Fleece), then again in 2008 (Majmua) and 2010 under my own imprint,  is an album of my original compositions and my transcriptions of songs by Curtis Mayfield, Tammy Wynette, and Olivier Messiaen.

Music, as with all art, is communication, and as such we communicate with other human beings - collaborating, soaking in, together finding meaning. My long term collaborations with other musicians has been, and continues to be, an interesting ride.  I seem to have been drawn in like a magnet to a fascinating and musically-rewarding life of collaborations with various "outlier" musicians, a collection of geniuses who inhabit the fringes of the musical world - people like guitarist and vocalist Eugene Chadbourne, the mysterious Jandek (whose name for many years provoked discussions as to whether he even existed), Maryland's own Zane Campbell who fuses a legacy of hillbilly mountain music with punk, country-western, Irish, and rock; Josephine Foster, a pianist, guitarist, conservatory-trained operatic singer, and songwriter; Dan Dutton, an artist, sculptor, composer, gardener, and songwriter; the twisted Great Plains beauty of Rose Thomas Bannister's music; Carri Norris, a songwriter and singer of Kentucky mountain ballads; among many others.

Uma was my first solo album, released in 2000 on the Loveletter record label, again in 2002, for European distribution, on the ulftone label, and finally self-released in 2010. I remember at the time, I thought my days as a musician were coming to an end, and I just wanted to document the music I had written and the music I had been performing (that sense of a personal dies irae had followed me throughout the early years of my recording projects). David Wilcox, owner of the the small label Loveletter, graciously gave me that opportunity.

This CD is a picture, for what it's worth, of where I was physically, emotionally, and spiritually, at a certain point of time and in a certain space in August of 1999. The songs were recorded on a hot afternoon, live in an empty auditorium within the space of a few hours.

". . . Finally they reached the banks of the Narmada and the Naga Baba told the child she was nearly home. 'But we must cross to the other side of the river. Then no one will be able to find you. This great body of water divides India. Even the years are calculated differently on the other bank. You will begin a new life there. I will teach you to read and write. And I will give you a new name.'

'What will you call me?'

'What does it mean?'

'It is another name for the goddess,' the Naga Baba replied, lifting her into a large, flat-bottomed ferry crowded with farmers taking their produce to a weekly market. 'Uma' means 'peace in the night.'"
- from the novel "A River Sutra" by Geeta Mehta

"Texas: Three Days and Three Nights" and a travel video

Ten years ago, I was asked by Caroline Kraabel, the editor of Resonance, a print magazine put out by the London Musicians Collective to write an article describing a typical experimental music gig - what it was like going to the venue, performing, the people I had to deal with, etc. At that time, 2004-2005, I thought of all the interesting experiences I had had as a performer and came to a conclusion that what might be more interesting would be some of the experiences I had had as a country-western musician. So I wrote about the history of country music in Houston and two typical (in those days) performances, much of it while I was driving to these gigs (thankfully before texting became a thing), putting my pencil onto the paper without looking and deciphering later. "Texas: Three Days and Two Nights" was the result, first published in Resonance magazine, then re-published by the online CounterPunch magazine. They submitted it to Da Capo Press who included it in their anthology, "The Best Music Writing of 2006". People sometimes ask me if I plan to write more, but I'm not sure I have another story of that kind left in me. Time will tell.

Three Waters is a short musical travel video through the flatlands of East Texas and southwest Louisiana.