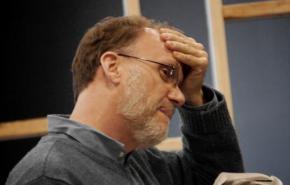 Stephen Nunns is the cofounder of the Baltimore theatre company, The Acme Corporation, where he has co-directed, arranged and adapted, composed music and designed sound for a number of productions, including Follow No Strangers To All The Fun Places (“Best Play – 2018,” Baltimore Magazine) Stranger Kindness (a “misinterpretation” of A Streetcar Named Desire, which received “Best Play – 2017,” from Baltimore City Paper) and the company's 24-hour production of Samuel Beckett's Play (“Best Production” -... more
View Stephen's Resume

He Do the Police in Different Voices

He Do the Police in Different Voices is a new rock opera based on Eliot’s classic 1922 poem, The Waste Land, that explores the polyphony of voices in the work in a contemporary pop music context. The piece was to be performed live as an Acme Corporation production, but because of COVID, I am now in the process of creating an album of the material. I have been doing long-distance collaborations with vocalists/actors over the last six months, and am continuing to work on the piece at this time.

He Do the Police in Different Voices follows a day in the life a poet named Tom who, over the course of an evening, encounters a variety of characters including a drunken cockney woman, a blind seer, a fortune teller and a young disillusioned office typist. Along the way, he is haunted by the ghosts of his ex-wife (who was committed to an asylum) and a lover who died in World War I.

All of the lyrics are re-arranged and adapted from Eliot's poem. I composed and performed all of the music. The vocalists on the samples below are Molly Cohen and Ruben Del Valle.

Co-director and composer. Produced by The Acme Corportion in 2017.

Follow No Strangers To All The Fun Places is loosely inspired by the structure of Italo Calvino’s 1979 postmodern novel, If On a Winter’s Night a Traveler. But not really. Actually, the piece deconstruct the audience’s experience of watching theatre. The play lovingly followed two characters’ repeated—and constantly interrupted—attempts at making a piece of theatre.

Short vignettes of various styles of theatre and performance were presented: A short play in the style of Samuel Beckett; a Phillip Glass-style composition presented in a manner vaguely reminiscent of Einstein on the Beach; and a German-language puppet show were among the pieces presented. Meanwhile, audience members were at various times instructed to listen--via individual headsets--to a narration that deconstructed the experience of watching the piece.

Through constant breaks, disruptions and disconnections, the show broke down theatrical narrative; explored the relation of fiction to real life; and ultimately tried to answer the question of why anyone would want to make art in the first place.

“...if there’s one thing Acme doesn’t do is odd and weird for its own sake. There’s an intentionality behind every element of the presentation… if you allow it, this Acme production encourages you to start thinking about everything else you consume in different ways. Take the red pill.”
~ Bret McCabe, Bmore Art

Co-direction, adaptation, arrangement and sound design. Stranger Kindness was a misinterpretation of the American classic A Streetcar Named Desire. Using the actions, intentions and emotions of the original script, the piece alternated between a play and a video being live filmed for the audience.

Williams' play was distilled down to a four-character hour-and-a-quarter performance. The dialogue from the play was substituted with other texts: Blanche DuBois' lines came from various Samuel Beckett plays and prose, Stella's lines were pulled from Thornton Wilder's "Our Town, and the character Mitch spoke lines from a variety of feminist theory texts. Stanley Kowalski's language was actually pulled from the soundtrack of the classic 1951 film, so Marlon Brando's disembodied voice was the only trace left--language-wise--of Williams' text. Portions of the performance were presented via live video to twenty small monitors that were situated in front of the audience members.

"Acme offers up probably the most radical and punk rock art thing happening in the city right now. And yet, it's faithful to the Williams play in the ways that matter—namely, mood, message, and atmosphere."
~ The Baltimore City Paper

(Director) This Sam Shepard monologue–the last fleeting thoughts of a man about to die in an electric chair–was performed by Chris Ashworth and produced by the Acme Corporation in 2013.

The play was staged it in the bell tower of St. Mark’s Church, a claustrophobic, stone-encased, dungeon of a room that fit approximately 18 people per performance. In a mere 10 minutes, Ashworth’s bravura performance went through a myriad of thoughts and emotions during the condemned man’s final moments.

Selected by The Baltimore Sun as one of the “Best on Baltimore stages in 2013,” Sun reviewer Tim Smith referred to Ashworth’s performance as one of “virtuosic nuance and arresting intensity.”

This was partially an experiment in endurance—the company was particularly interested in seeing how the piece would “break down” over an extended period of time. Such temporal concerns are not that uncommon in the world of performance art, but it is not something that one normally encounters in traditional theatrical settings.

There were a total of four iterations of the play, with each repetition taking approximately one hour. (The text normally takes about ten minutes to perform.) First, the play was presented in a more or less “traditional” way, with individual lights illuminating each of the characters as they stand side by side reciting their lines. The second iteration was a typically British bourgeois cocktail party that broke down into a drunken revelry. The third was a metatheatrical moment in which the actors relaxed, ate and recited the lines out of character. The last iteration were monologues created for each character from the text.

Play was recognized as Best Production in the City Paper’s Best of Baltimore for 2013 and one of the performers, Sophie Hinderberger, won best actress for 2013 in part for her work in the piece.

(Director and Adapter) Not I was produced as part of Acme Corporation’s Rogue Waves—an evening of short plays in February 2012 at the Bell Foundry. The presentation of the piece was a radical rethinking of Samuel Beckett's play. Rather than presenting it in the traditional way—“a stage in darkness but for a mouth . . . faintly lit from close-up and below”—the actress, Sarah Lloyd’s face was totally lit and her voice was amplified by a visible microphone. At the end of each section of the play, Lloyd put her head in a 50 gallon fish tank filled with water, with a video camera underneath. The image of her face under water was shown on a television screen stage left.

"And Now It Is, and There's Nothing Left To Say,"