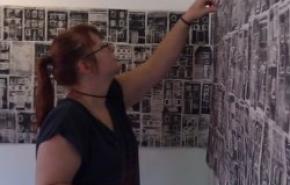 Shana R. Goetsch's art frequently involves themes of social justice, empowerment, love, loss and bereavement; she began painting in 1989 after witnessing the murder of her mother. Often using words, cultural references or found objects, she injects personal voice, history and memory into her pieces. Originally from southeastern Wisconsin, Goetsch's work has appeared in numerous exhibitions nationally, and is held in private collections. She received her MFA and MA in Community Arts from the... more
View Shana R.'s Resume

This work deals with base emotions, aspects of power and control, and an influx of Trickster energy being experienced through that of the Animus. Fire, antagonism, unmitigated rage, and trauma emerge through the dualities of the image and its shadow, as well as the written word.

The series mines what is not working, what has not been used, things that are seemingly “useless”, yet have been saved for years. The work emulates a machine, underscoring the very human ability to put things back together in terms of a life, in terms of a workable fix, in terms of healing. The pieces are becoming cogs; useful, engaging parts of the whole. Created as a centering mechanism, the mandalas became something of a conceptual response to machinism.

These particular mandalas were started during the Baltimore Uprising in 2015. I live not too far from the intersection of Pennsylvania Avenue and North Avenue where much of the action was occurring. The near constant, multi-day din of multiple helicopters overhead was the main impetus for this body of work. “Vimana”, from the Sanskrit, refers to ancient mythological flying machines; I likened them to the present day helicopter's rotors and blades.

While I am very used to hearing and seeing helicopters on the weekend nights, the events of 2015 brought a better understanding to me that it’s every day for some neighborhoods in the city. The perspective I had was ultimately about the effects of violence, and the tools I had as a person/artist to relieve these anxieties, to be able to reach for a sense of peace and wholeness where there was none. I recognized that many do not have the privilege of these same tools, or seemingly, the right to either “peace” or “quiet”.

The Psychology of One

"The Psychology of One" is a series about reflections and perceptions, as well as action and reaction. Each piece ultimately creates a symbiotic contemplation between one half and the other. This multimedia series explores the psychological constructs and material aspects of transparencies, projections, reflections, symmetry and wholeness.

Domestic violence knows no boundaries and carries no discrimination. Row houses are the subject of my newest pieces, and part of my continued goal to fight domestic violence pictorially. Even though the row houses are seemingly silent and static buildings, they embody the “souls” of those affected by violence. They are a narrative that helps to explain the magnitude of domestic violence incidents nationally and within Baltimore City, Maryland.