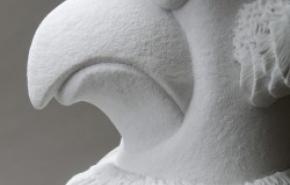 Sebastian Martorana is a sculptor and illustrator living and working in Baltimore, Maryland. For over ten years, Sebastian has focused on the art of carving. Much of the material used for his sculptures was salvaged from Baltimore’s historic, though often discarded, architecture. Sebastian works on private commissions and commercial projects from his Baltimore studio. Clients include the United States Senate in Washington, DC, The National Basilica in Baltimore, and St. Patrick’s Cathedral in New... more
View Sebastian's Resume

When I drop my children off at daycare or school I experience a minor amount of anxiety. I don’t like to admit it, but I do—and we have excellent childcare.

I can get worried when I can’t get in touch with my wife when she is out with the kids, because my head will go to the worst possible nightmare scenario given even a brief period of uncertainty as to the whereabouts of my family.

I CANNOT even begin to fathom the crippling horror and fear that must overcome a parent that has had their child taken away from them with no sense of where they are and when they will be reunited.

Sadness is what one feels after an accident or a natural disaster. Those are tragedies. What has happened to families at the boarder is an ATROCITY—not a tragedy. It was done on purpose to be punitive and inflict the greatest possible damage. There was no plan for reunification. Even if there was—it cannot be undone.

There is no “fixing” this. Even IF the U.S. Government meets the goal of 100% reunification by the “deadline” (just hours away), this trauma will be permanently etched upon these children and parents as though it were carved in stone. That is a metaphor, but not hyperbole. Look at the research.

Silence, inaction or a vote in support of those who would cause this to occur is tacit support of the worst behavior of and against humanity. A choice to abstain from voting is the same, perhaps worse.

No political party that would support this should remain in power. I will not layout voter statistics here, but in short, voter apathy allowed this to happen. We cannot undo the atrocity that has occurred, but we can prevent it from happening again.

I hope you feel it too.

"Unseen" began as a reflection on the amount of artwork that is produced but never seen.
How many people actually "see" artwork? Most people that "see" artwork actually haven’t. They have seen pixels. Fewer people have actually seen my artwork in person than have experienced it in the form of curated photos posted via the internet on screens no bigger than their fists.
Going further—how much of my “work” have people really seen? Do they see each hour spend spilling specks of marble on the shop floor? Do they see the chisels sharpened or unique files made? Do they see the years of training that allowed me to attempt each piece in the first place?
Further—apply that to all products. We see the result, but not the process. How much labor went into the design and fabrication of even just the protective cases that surround our cell phones? Do we think about the loom that wove our clothing? or its operator?
The texture of the cloth in Unseen is based on my examination of the simplest of fabrics—flour sack dish clothes (my wife and I use a collection in our kitchen, hand stitched and embroidered by her grandmother, from actual flour sacks). The sculpture has the peaks and valleys of the fine warp and weft threads. However, only with focused, directional light they are revealed. This is true of nearly anything in life—it can been seen clearly if one views it in the proper light.

Often, the most exciting pieces I make happen when collectors say: "What do you really want to do next?"

This can be intimidating since you are being put on the spot and there is pressure to have an idea immediately. Luckily for me, my work takes so long that I will literally never catch up with the running and ever changing list of potential artworks in my head. Also, one of my favorite things about visual art is that it speaks without words, however sometimes you do need to be able to articulate an idea before actually making it. In this case I was very fortunate that they were interested in seeing my vision. Thanks, T & L.

We Both Wear Pants

This piece is both portrait and admission.

It comes from the same place as a series of pieces I began years ago. Yours, Mine & Ours, was my attempt to visually describe the unique personalities that make up my family. My wife is the smooth, folded bath towel to my rumpled heap of terry cloth. Another piece, Shed, focused on the business casual work attire donned by my wife on a daily basis.

This recent piece goes much farther in being honest about a fairly large aspect of our lives: work. The smooth, satin, carefully folded material on the slacks-specific clothes hanger are in stark contrast to my rough and rumpled work pants which, when not in use, are usually found slung on a hook in a locker with the work belt still in the belt loops. This pretty well describes our unique work situations.

The fact that my wife’s stable career has allowed me to develop in a much less structured way as an independent artist is pretty much constantly on my mind. While I have been extremely fortunate, having received a degree of critical acclaim and financial success that I never would have expected, none of these achievements have represented anything that approaching riches. I grew up in a household where my father was the primary “bread winner” and my mother took care of most everything else.

I must admit that I feel shame and a sense of personal failure that I have not even come close to reaching the point where I could say to my wife: “Hey, I’ve got this. You don’t need to work to support this family.” She wouldn’t want to stop working if she could; she loves what she does, however, I would like to be able to give her that option. At present, I cannot do that. While we might earn approximately the same number of dollars per year– hers come on a consistent basis and with health insurance and other benefits that my sporadic, commission-based, freelance, sub-contractor income completely lacks.

Like the stone itself, relationships can be hard, and require a lot of work. They are both enduring and fragile at the same time. And they are worth the effort. Individuals are often dissimilar, though they work.

Jokes and comments are often made regarding who wears the pants in a given relationship. Many people have a this idea that being a stone carver is a very “macho” endeavor, but from my perspective, not really. First off, there are fair few extremely successful female stone sculptors out there. Secondly, there isn’t anything much more traditionally masculine than being able to fully financially support one’s own family . . . So, I can’t really agree with the stereotype. I’m not being overly modest. I love the tradition and physicality of the work I do, and I think that I can make some neat stuff. I am a handy and all. However, if one was going to ask who wears the pants in our family– well, it certainly wouldn’t be me alone.

In our case, I’d say that I have received far more of the benefit from our work together than she. Her stability, organization, reliability, and care have allowed me to have a much more chaotic, irresponsible and unstable career path than the average person. I’m the dirty laundry. I’m very thankful to have been able to hang my rumpled, coarseness next to her smooth, silkiness for many years now, and hopefully for many more.

This is Not a Jacket

This piece was commissioned based on a sculpture of my wife's work jacket that I did years before. The matching of texture and detail were of paramount importance to the client. The title pays homage to the artist Magritte, subverting efforts towards realism. I would argue that despite the degree of fidelity to reality achieved, no sculpture actually is another thing-- it is a sculpture. All three-dimensional artworks, even the highly realistic, are matrices of minute, precisely oriented, abstract sculptures.