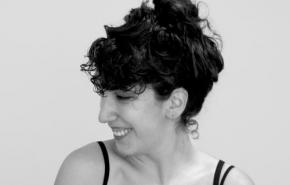 Sasha Baskin’s weaving and drawing work explores the intersection of craft and classical rendering. She uses traditional weaving and lacemaking processes in combination with source imagery from reality television to address the intersections between analog and digital technologies. Trained in classical drawing, Baskin received her Bachelor of Fine Arts from the Maryland Institute College of Art in 2014 and worked as a portrait artist for several years. Transitioning to craft and studying weaving,... more
View Sasha's Resume

Will You Accept This Rose?

A series of woven images addressing modern mythology through the lens of popular culture. Each piece was hand-woven on a TC2 jacquard loom with naturally dyed cotton and silk and is based on a digital still from season 22 of “The Bachelor.”

This image depicts a woman, Jenny, rejected by the lead during the second episode of the season. I was struck by her strength and resiliency in the face of reality television rejection and explored her character as a modern mythological figure.  By repeating her image in multiple large-scale weavings I created a pantheon of her digital image as a mythic figure.

I used a modified rosette weaving pattern throughout this series- a pattern typically seen in Americana coverlet weavings.  A rose is the symbol of validation on “The Bachelor” and receiving a rose allows a contestant to continue on to the next week. Through the repetition and distortion of this rose-based weaving pattern, I offer the woman getting rejected a form of agency and control over her own roses.

By Any Other Name

In the Greek Myth of the judgment of Paris, three goddesses wait for a mortal to offer them an apple proclaiming the chosen goddess the most beautiful. On The Bachelor, women wait for roses delivered at overly dramatized “Rose Ceremonies” when a man makes the choice of who he wants to keep dating out of his pool of available women and sends the rest home. The rose is just a new manifestation of the apple. It is the same story over and over again. It is another symbol of acceptance and validation. The repetitive structure of each episode becomes a retelling of a Hero’s Journey: a new myth for a new era.

Using screenshots from The Bachelor as source material for my filet lace images, I explore reality television as a modern form of mythology. The rose as a new iconic symbol. By rendering this rose in lace I refer to lace’s historical and contemporary connotations: often found only in black or white lace for weddings or lingerie, the lace rose acts as a metaphor for the Madonna/whore paradox.

Each piece in this series is titled from a catchphrase popularized within the show. These phrases become mantras, almost prayer like for the contestants. The show creates a dialect and language that reference the ritualistic process.

A series of smaller woven works exploring the role of overshot rosette patterning on digital stills pulled from episodes of reality television. The patterning creates a veil or screen over the figures and digital images.

In each piece, the rosette overlay functions differently, the blush of the skin, a latticework concealing the figures, or intentional distorting and glitching the image creating analog "broken pixels" as broken threads.

As the ancestor of the modern computer, the loom’s relationship to pixel and screen are unavoidable: the 0s and 1s of binary code are a direct descendent of the overs and unders of woven threads.

Portrait of a lesser-known reality television star on the beach during filming of "Bachelor in Paradise." While on a highly produced and artificial show, the woman, appears without makeup in natural light mirroring the pose of DaVinci's "Portrait of a Woman."

The image and pattern repeats within the woven structure, creating moments of tactile and physical glitch. The screenshot is rendered in analog pixels of overlapping threads.