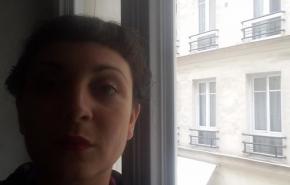 Sarah Jacklin is a director and performer working in Baltimore. Sarah takes on dense, absurd, ensemble pieces with dreamlike logic. Her themes are class struggle, environmental decay and and the schizophrenic experience of contemporary culture.  Ms. Jacklin graduated from the Maryland Institute College of Art in 2007 with a Sculpture BFA. She’s had a variety of experience in non-profits and worked at Port Discovery Children’s Museum (2007-2015) developing exhibitions.... more
View Sarah's Resume

Trial in the Woods

June 2018, I produced, costumed, and directed Trial in the Woods, a new play commissioned from the artist Stephanie Barber. Woods is a courtroom drama, in which a tight-knit community of animals put the very notion of punitive justice on trial after the murder of a young wolf disturbs their sense of fairness.

In 2016 The Annex Theater Selected me to direct and pitch a show for their season. I choose to create an adaptation of Matthew Thurber's 1-800-MICE. Carly Bales and I co-adapted the script and I directed an ensemble cast of nine to play a revolving cast of screwball characters. When reviewing 1-800-MICE for B-MORE ART, Brett McCabe wrote, "As with Anti-Klaus, Jacklin's dramaturgy cocktail is made of one part American wholesomeness, one part latent oblivion, and two parts holyfuckingshit... this play may be as close as some of us will ever come to seeing a Jack Smith performance in the flesh"

DC Metro Arts Says, It’s a risk to go all-in on bold, ​avant-garde​ projects – a risk that many companies simply can’t afford to take. I’m glad that Baltimore, with our quirky love of the strange and wild, is the place that Annex calls home. (Jacklin) taking on the challenge of adapting and staging a bizarre comic with a cult following like ​1-800-MICE​ was a risk, but it is one that paid off beautifully. ​1-800-MICE is a smart, absurd comedy that manages to be thought-provoking and topical while hurtling you through space at the speed of a meteor headed straight for Earth. Loosen your grip on narrative realism and go take this ride.

The Lord of Flies

In 2015, I developed a concept for a director-less adaptation of Lord of the Flies. The show, The Lord of Flies, which was inspired by William Golding's novel was written and devised with the Annex Theater's 2014-2016 Resident Company which included Jake Budenz, Madison Coan, Ryan Kidwell, and Sarah Lamar. Ren Pepitone, Maura Dwyer, Dave Iden, and Maddy Scott filled out the cast and continued to develop the play over the rehearsal and production process.

In 2015 I adapted and directed Blood for Dracula from Paul Morrissey's Warhol produced art/sexploitation film. Attached is a PDF of the script, as well as text of my interview with Charlie Jay about the project with that was featured on City Paper's blog.

I've been so busy with theater I haven't much documented my continuing visual arts practice. Check back here for more samples to come!