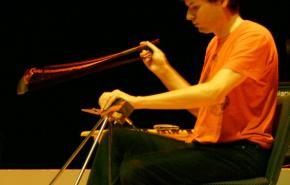 Samuel Burt is a composer in Baltimore, Maryland. His compositions have been performed across the U.S. As an improviser, he has performed for audiences in Atlanta, Baltimore, Chicago, New York, Pittsburgh, and other U.S. cities and has made numerous appearances in the international High Zero Festival. As a board member of the High Zero Foundation since 2005, he has helped curate the High Zero Festival, Red Room series, and Worlds in Collusion.  Inspired by John Cage, Burt pursues experiences... more
View Samuel's Resume

Before formal study of electronic music in college, grade-school Samuel Burt used an Atari computer to sequence music for his stop motion videos. With the isolation of the pandemic, Burt once again turned to solo composition work with electronics. Extravagant Toys showcases a small selection of Burt's efforts on modern Eurorack synthesizers. To see the unfiltered, raw, almost daily work check out his Instagram account at daxophonesam.

A performance for socially distanced ensemble and audience.

Composed for trumpeter Patrick McMinn and an ensemble of any assortment of instrumentalists, Wyman Park Dell was first performed September 13th, 2020 in Baltimore's Wyman Park Dell. The video depicts the second performance which occured on Stoney Run Trail in Baltimore,  October 24th, 2020. This piece was optimized for outdoor performance, with a virtuosic trumpet part and parts for the ensemble that required no rehearsal. The ensemble blends with the natural environment, with uncoordinated rhythmic structures that mimic groups of insects, frogs, and birds.

The daxophone, pictured, has unlimited potential for making new (singing, grunting, hooting, drumming, scatching) noises.  It's played by clamping a piece of thin wood, bowing it, and placing another heavy piece of wood on it to change the vibrating length. Each carefully chosen and shaped pieces of wood are called tongues. They are both a sonic and visual art. Each is unique in wood grain, shape, and sound.

Samuel Burt built his first daxophone in 2011 consulting with the inventor Hans Reichel. He held a daxophone workshop at the Red Room in 2019 with aims to form a daxophone choir, playing compositions by living composers and arrangements of older music.

Burt plays daxophone in the band Coy Fish led by Sarah Hughes. They released a self-titled album. They opened for the Library of Congress's "Summer Movies on the Lawn" screening of the Wizard of Oz. Maria Shesiuk and Burt collaborated as Lightning Golem to produce an album of daxophone and synthesizer music called Cryptid Research. Burt engineered a recording of a session in Athens, Georgia, of himself on daxophone, Jeff Crouch on trumpet, and Killick Hinds on fretted Walrus guitar. He released it as Sneaky E.

Burt composed music for two daxophonists and percussion, performing it with Eric Franklin and Shelly Purdy at Artscape 2018. The work, entitled Renku No. 1, is built around a form of Japanese poetry where individuals add stanzas to a poem.

Music for Piano and Electronics

Samuel Burt learned much from his many pianist friends. Over the past two decades, he's written a significant amount of music for piano, most recently Mixed Signals and Node Ode.

Lisa Weiss and Burt have begun a project to introduce new works for piano and live electronics. Weiss performed Mixed Signals at Goucher College in 2017. Mixed Signals is a work for computer or cell phone that listens to the notes the pianist plays and generates an echoing harmonic cloud, reordering the notes and stretching them out. This work will also be used to christen the new piano at the Immaculate Heart of Mary in March.

The aim of this project is to allow the performer to plug a cell phone into an audio cable and set the phone on the piano and begin performing these new works with minimal effort. Electronic music is often inaccessible to performers with limited computer music background, often requiring that someone else's presence to work through the technology. With modern developments and if programed with great consideration, the composers can reduce the technical requirements.