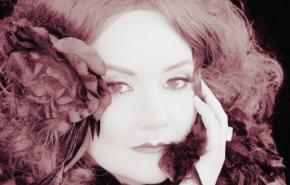 RUTH MARGRAFF has been called a leader in the American avant garde for her “audaciously original" (Moscow Times) use of lyric language that provides “layer after layer of richly textured emotion...and imminent danger” (Dallas Morning News). Critically acclaimed for writing martial arts operas DEADLY SHE-WOLF ASSASSIN AT ARMAGEDDAN and a VOICE OF THE DRAGON trilogy with the late composer Fred Ho for the Apollo, Guggenheim Museum, LaMama, Brooklyn Academy of Music and a commercially successful tour... more

MIRROR BUTTERFLY is a jazz opera that unites the music and stories of climate refugees from Mexico, Syria, and West Africa. Performed by the Afro Yaqui Music Collective, an indigenous-jazz band led by Gizelxanath Rodriguez and Ben Barson with Samuel Okoh-Boateng featuring interviews with former Black Panther Mama C exiled in Tanzania, Wanlove a kubolor from Ghana, and Azize an activist working with Syrian Rojava and Mexican Zapatistas. MIRROR BUTTERFLY premiered at New Hazlett Theater Oct 11-12, 2018 (Pittsburgh)  and Kennedy Center Millenium Stage November 23, 2018  (Washington DC); developed by Nov 4, 2018 National Ensemble Theater conference plenary performance (Tucson); NPN showcase Dec 14-15, 2018 (Pittsburgh); at the 1st Mesopotamian Water Forum Apr 6-8, 2019 (Kurdistan, Iraq); and released on Innova Records at Red Rooster/Ginny's Supper Club (Harlem); on Aug 3, 2019.  Excerpts featured on howlround, the New Sounds playlist, on 91.3 WYEP Aug 27, 2019 with interview on the revolutionary responsibility of being an artist and partnership with the Yaqui Námakasia Radio, which receives all CD sales, and The National Jazz Museum in Harlem on October 3, 2019 as part of the Jazz and Social Justice salon and at Jazz Ready/AnchorFM.

an avant musical devised from an 1980s episode of the iconic TV series FANTASY ISLAND about the pleasures and perils of wish fulfillment with a ventriloquist dummy. Commissioned by Trap Door Theater (Chicago).  Premiered Sept 29-Nov 5, 2016 at Trap Door Theater dir Kate Hendrickson following our acclaimed 2012 production of ANGER/FLY (Chicago)

VOICE OF THE DRAGON 3: DRAGON VS. EAGLE commissioned by Rockefeller Foundation & Peregrine Arts, 2008 Brooklyn Academy of Music workshop and January & June, 2007 at the Apollo Theater (NYC)

See--> 2:49 min. excerpt of VOICE OF THE DRAGON 2: Shaolin Secret Stories with photos from live performance at the Apollo theater soundstage here: https://vimeo.com/32748801 including track: "Li Wen Mao, The Peking Opera Orphan." The narrator’s vocal is recitative in vowels that extend in a Peking opera style of English. She inhabits the subjectivity of all the characters of the story, much like the chorus in Japanese Noh plays.

Long before martial-arts acrobatics became a staple of action movies, they were part of Chinese opera, and the composer and baritone saxphonist Fred Ho has decided they can be at the center of an American opera as well. His ''Voice of the Dragon 2: Shaolin Secret Stories'' is an opera without songs. But it has plenty of jazzy music from Mr. Ho's sextet, the Afro Asian Music Ensemble, and a nearly nonstop display of leaping, punching, somersaulting, pole-twirling, sword-wielding combat, choreographed for a dozen martial artists by Jose Figueroa. Its world premiere was presented by the World Music Institute's Interpretations series on Thursday night at Soundstage at the Apollo Theater, the small upstairs space at 253 West 125th Street in Harlem, where it continues through tonight.

''Voice of the Dragon'' tells tales of the Shaolin Temple, the cradle of Chinese martial arts, and Mr. Ho plans to make it a trilogy. The first part, ''Once Upon a Time in Chinese America . . . The Martial Arts Epic,'' was presented in 2001 and depicted a battle at the temple against a traitorous female warrior, Gar Man Jang.

''Secret Stories'' is the prequel: coming-of-age stories for Gar Man Jang (played by Soomi Kim) and the Shaolin heroes who will go on to fight her. It is told, like the first installment, in narration written by Mr. Ho and Ruth Margraff that was delivered with melodramatic relish by an elegantly costumed narrator (Marina Celander); it was directed by Terry O'Reilly. The narrator shifted between high-flown storytelling and slangy retold dialogue, with glints of humor, while the martial artists rocketed across the stage.

''Secret Stories'' is about loyalty and self-renewal. Like the X-Men, the Shaolin heroes have varied talents. One has a crouching, feral attack because he was raised by leopards. One specializes in blades, one in wooden sticks, one in theatrical flamboyance. Each comes to a monastery as an orphan or outcast, chafes at the discipline but eventually accepts the teachings of the masters. As heroes in training, Tom Kaseda, Philip Silvera, Sekou and Scott Parker all made quick transitions from feigned clumsiness to taut precision.

There's also a girl, Ng Mui (Mei-Chiao Chiu), who grins and pouts with rubber-faced glee as she grows increasingly skillful. Gar Man Jang turns from Ng Mui's mentor to her jealous and vicious opponent, and as ''Secret Stories'' ends, Gar Man Jang and the narrator merge, moving in tandem and vowing to defy even the moon and sun.

Mr. Ho's music provided vamps and themes for each character, and it worked more as soundtrack and atmosphere than as foreground music. He often used closely harmonized saxophones akin to Charles Mingus's arrangements, but when melodies emerged, they often hinted at Chinese modes, and Royal Hartigan deployed Chinese cymbals, gongs and woodblocks alongside jazz drums. It was burly, foreboding music, using shifting meters to keep the tunes off balance and provide subliminal tension.

As a jazzy martial-arts pageant, it orchestrated some impressive razzle-dazzle.

at Theater of Note (Los Angeles) and Rude Mechanicals (Austin). 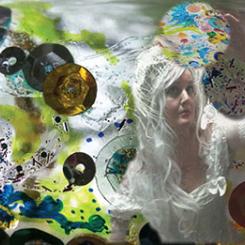 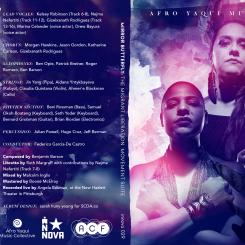 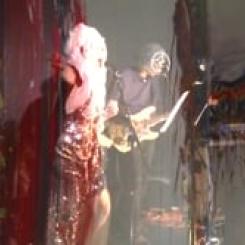 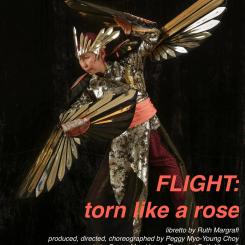 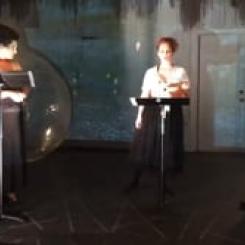 FANTASY ISLAND FOR DUMMIES ("Faire la Dorveille too near too near) Trap Door Theater, Chicago USA