I am an inter-disciplinary artist investigating Eurocentrism as a driver of racism, patriarchy, and capitalism. I deconstruct nationalist narratives by revisiting my childhood of indoctrination in a religious cult and my naive exploration of American culture after my escape as a young adult. In my photography, printmaking, and storytelling works, I invert the significance of Classicism used as expression of white superiority and economic dominance, using it instead as a way to de-center... more
View Rose's Resume

On their surface, Scrolls are a series of short sentences or paragraphs I have written to tell a complete story on a computer or tablet screen. You can click and scroll with a mouse or interact with a touch screen to reveal more text, which can change the meaning of the story at the Scroll’s surface entirely.

When I emerged from the religious cult of my childhood and young adulthood, I had to sift, dig, search, and obsess to uncover the truth as if gradually unrolling an ancient scroll. The interactive Scrolls are a proxy for that first-hand experience as I connect the atrocities of America's past to present-day issues using vignettes of my isolation, Eurocentric indoctrination, and naive exploration of the outside world after my escape.

In this contemporary storytelling medium I use both my photography and my digital photo compositions to illustrate the pages, as well as other graphic art created expressly for the Scroll. Scrolls are both a deconstruction and an expansion of my printmaking work, contextualizing many of the same component images and concepts.

Each work sample is a short video showing how someone might interact with the Scroll, and each includes a link to the interactive artwork.

In this contemporary printmaking series, I invert the significance of Classicism used as an expression of White superiority and socio-economic dominance, using it instead as a way to examine and de-center Whiteness in the American story. I photograph material culture that sustains a Eurocentric focus in American thought as well as objects and structures to represent the inevitable end of those narratives. I then assemble them into digital compositions using Adobe Photoshop. My final prints are pigment ink on watercolor rag.

My aesthetic draws on my childhood surrounded by Eurocentrism in sculpture, architecture, and religious illustration that romanticized suffering against a backdrop of nature and antiquity. I also built upon my early exposure to the religious art of the Renaissance, expanding to Thomas Cole's landscapes, d'Hondecoeter's birds, and Hubert Robert's use of ruins as social commentary.

Process: Using My Photography to Create Prints and Illustrate My Interactive Scrolls

My exploration of the physical world through the camera lens is the foundation of all all my visual and interactive work. Once I capture an image, it may be contextualized in multiple different ways in my different mediums. This project shows how I used some of my photographs in my interactive scrolls and prints, and also include my compositions as illustrations in my scrolls.

I make my pigment prints almost entirely from my own photography, and one scene can be made up of dozens of photos. To make scenes in Photoshop, I assemble landscape photos to create backgrounds, combine different skies and seascapes, alter photos of local buildings into abandoned ruins, and position animal subjects as if they are interacting. It is like making plates or blocks for more traditional forms of printmaking, but it is a modern and entirely digital process that I call Contemporary Printmaking.

I have also occasionally used old family photos, and work from important public sources like NASA and Hubble Heritage Team with permission.

Writings: My Memoir Is Not About Me

I have known ever since my escape twenty years ago from the cult I was raised in that I would write a book, but I couldn't begin until I had discovered through my artistic exploration what the book was about. More importantly, I needed to uncover what my story was not about.

It is not about the suffering of an abused wife who would risk anything to save her children.

It is not about one citizen who "pulled herself up by her bootstraps" and acheived the "American dream".

It is certainly not about how anyone can make it in America.

While I did live some version of these stories, and I did have to consider those themes over and over during the nearly twenty years it has taken me to begin this project, it turns out that my memoir is not about me at all. It is another part of the same investigation I have undertaken through my visual and interactive artworks.

I have learned to see my early life as a piece of performance art in which I played the leading role. As the protagonist in a play that no one saw, my job now is to recreate the script as best I can given the gaps in my memory caused by trauma and the passage of time. Rather than detail the Joyful, Sorrowful, and Glorious Mysteries of one life, it is a play that uses those stories as a vehicle for deep exploration of American social and economic constructs.

I have begun by writing short stories about my past and artfully tying those themes to current events. When I share the stories on my blog and on social media, they are providing more history, context for and engagement around my visual and interactive artworks. 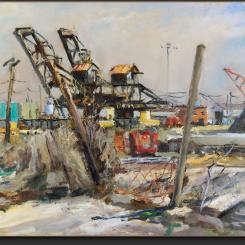 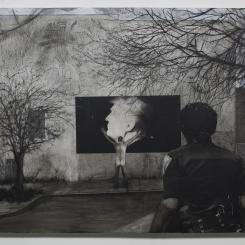 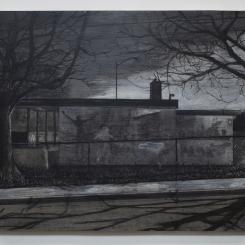 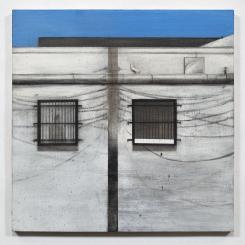