Robyn Marie Holl was born in Virginia (US), in 1980. She was raised in Maryland, where she began to paint and draw in her spare time. In high school she developed her talent, became president of the National Art Honor Society, was selected for the Gifted and Talented Saturday art program, and was finally chosen from the graduating seniors to represent her school with a slide presentation for the Howard County Board of Education. She proceeded to earn her Bachelor of Fine Arts in Painting from Pratt... more
View Robyn Marie 's Resume

In this series I have explored new tools such as the squeegee to apply paint on canvas. I have also enlarged my working platform to five-foot-square canvases. These works represent a dance my body does when I create each piece. The size demands the dance as I move over a canvas that is positioned on the floor. I also see Dancing Imagery through the progression of this body of work. In the recent piece, Black Body, the dancer moves accross the left side of the page. These works intend to surprise with mystery.

While working in a representational manner, I had the realization that I wanted the energy in my work to come not from outside influences, but to be driven from within myself. As a result, I actively sought out my own personal connections to my paintings and my purposes for them. My driving purpose currently is grounded in experimenting with exploring the formal elements of painting and the physicality of movement experienced during the process of creation. As I engaged with these new techniques, I found that my processes, and my consciousness, were transformed from deliberate to organic. These paintings serve as a transitional journey as I continue to question my relationship to the contemporary place of non-representational two-dimensional work and study my process in creating non-representational two-dimensional work.

My work is constantly developing as I grapple with this journey. Initially I used gestural paint strokes that symbolized the movement of the arm and recorded a stroke on the surface. I now have evolved into involving the whole body as a part of the process. During a critique, Abigail Deville suggested I should paint blindfolded with a mop and wide squeegee to open myself up and encourage a bold, fearless approach to painting. This experimental process emboldened me to move away from deliberate composition and linear decisions and instead embrace experimental process-oriented action. As the paint soaks and bleeds into the unprimed canvas, the paintings become more airy, atmospheric and ethereal. Chance and gravity distribute the color palette that I cannot control.

With a second experimentally risky piece, I realized the bleeding and soaking resulted in a work that seemed congested rather than open and spacious. The work needed breathing room and imposed order. After another critique, I cut into the canvas and began a series I called the Cut-outs, revealing the physicality of the object. Interestingly, being aware that the painting will be cut into is freeing and allows a similar loss of control as painting blindfolded. The cut-outs allow the work to be altered in unorthodox ways. The evidence of the process results in the work.

This work deals with gestural movement as a dance and as it exists in space. It is a progression of connections that interplay with color, line and form. Wholeness and Emptiness are explored through the intense colors and abstract imagery. Emptiness is here considered interconnectedness and being full of energy.

My painted abstractions deal with the gesture in motion, as it translates onto a surface. Process is a driving factor: canvas is laid out on the floor and I paint with squeegees, brushes and sometimes a mop or push broom. Gestures are simultaneously recorded on the surface as they are physically enacted. This process becomes a dance and like dance, it involves my body and space; the result is evidence of my body’s movement, evidence of a human existence.

Scaling down presents new challenges and with those challenges come new beginnings. 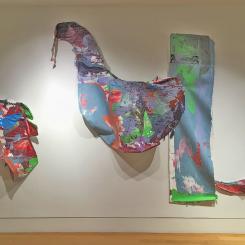