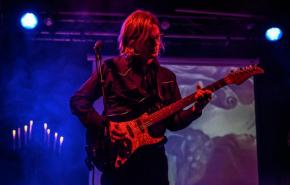 Rob is a lifelong musician as well as recording engineer and music producer.  He started playing guitar in his teens, influenced by mulptiples genres: mainly the guitar style of Link Wray & David Ash, and psychedelic rock. As an adult, his musical studies expanded to gamelan, polyphonic time signatures, and tunings mainly influenced by Sonic Youth. His current work in RjVj is still within the postpunk genre but includes his studies of western and horror soundtracks, Kraftwerk and vintage synth... more
View Rob's Resume

This is our first single, released in 2019.  We made a limited edition of 25 7” records. The records were made on a 30’s era lathe. Each ”lathe cut” is made one at a time by hand. It is also available digitally.
Listen here: https://rjvj.bandcamp.com/album/causality-unless

In RjVj, the guitar is not necessary the primary instrument. I play less notes and very few full chords. During the writing process, just as much time is spent on the other elements, which are programmed by myself and Veronica. In my quest for a new sound. I decided to play exclusively in an open guitar tuning. Allowing for note combinations not possible in standard tuning, and vice versa. This has helped me to play diffrently than I usually would. And has changed overall how I play the guitar quite a bit. Programming Bass lines and Drum machines has been a new and inspiring challenge for me.

This is ours, started in 2020 and released this year. This was released as a limited 3” mini CD with a hand made cover. Veronica drew the CDs individually. There are two color inserts, and a bat was glued to the outer paper sleeve. I am an avid record collector and I have always appreciated packaging that went above the norm. Especially this this age of streaming. To me, a record is about far more than the song itself. The artwork, liner notes and simply the physical nature of a physical release resonates much stronger within me.

This recording was used on our first 7” single. The covers were hand made, and included a 13 page, tape bound zine style booklet. Our Friend Bump Stadleman made a video for us. Here it is. Recorded live in 1993.

Women Of Destruction was the first band I joined that had a following and toured regulary. Besides our monthly local shows, we would play New York, Philadelphia and Boston quite often. We did two full month long tours of the US and were picked to play Austin’s SXSW festival in 1995, without any label support or “showcase”. We were very DIY. We screen printed our own shirts. Made our own 7” record and cassette covers. A later incarnation of the band was picked to be featured on the NBC television series Homocide: Life On The Street (Fire, part 2). We were Baltimores first “Riot Girl” band and were originally formed before that was really a phrase. Our primary lyricist, Andriana wrote feminist anthems, pointing out the many injustices that befall Women, both past and present. We also injected some humor as well, with songs such as “Phone Bone” being made up from lyrics the girls used from making prank phone calls to men at the Mt Royal Tavern.

What’s So Funny About Peace Love And Understanding. Cover by Shirle Hale and Friends

This song shows what I love best about collaboration in music making. In the fall of 2020 I was asked by Shirle Hale (vocal, acoustic guitar) to produce a cover of this iconic Elvis Costello song. Each band member was in different cites and recorded their own parts independently. At first I was unsure in which direction to take the song. It became clear once I got back Paul Hutzler’s pedal steel track, coming from Portland, OR. Next was drums and backing vocals by Miyuki Furtado in New York. Veronica Jay Clay added some keyboards and I added the electric guitars, then mixed and mastered it.

With Cotton Casino (vocal, synth) Derrick Hans, Drums, Jack Moore (synth), Bob Sweeny (Bass) and Bill Turney (guitar). In Mopar, I get to play my “wild guitar”. It is very much fun to try to push things sonically without resorting to pentatonic scale guitar heroics. Whilst there is a place for that, I wanted to help keep a twist on our brand of heavy psyche rock. The other band members are more than adept at these ideas as well, even though this is one of our more aggressive songs. Also notable is our vocalist, Cotton Casino who spent many years in the renowned and groundbreaking Japanese psyche rock band Acid Mothers Temple.

In 2018, RjVj was asked to do the soundtrack for a short film. Here is our cut, minus dialog. We used an array of vintage synths to create a creepy, wobbly tone.