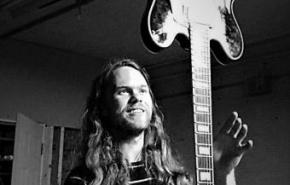 Rich Kolm is an event producer, arts organizer, band leader, and musician. His most notable recent work has been staging local music and performing arts events that seek to break down silos within the artistic communities in Baltimore City and foster a collaborative spirit. In 2019 he led the production teams for a new multistage music festival called The Baltimore Mixtape and for a tribute show fundraiser of the Talking Heads's concert film Stop Making Sense, which was the follow up to 2018'... more
View Rich's Resume

As soon as we walked off stage, having finished our 2018 tribute to The Last Waltz, people were asking us what the show was gonna be next year. Having had a great night, raising thousands for Moveable Feast with ~25 musicians onstage in front of few hundred people at 2640, it was hard to say no.

We selected Stop Making Sense as the follow up because it fit a few things we were looking for. The Last Waltz doesn't exactly tell a story per se but there is a plot to it, most notably the finish with everyone coming back onstage to do "I Shall Be Released." Stop Making Sense presented a similar opportunity to tell a story through our production. It starts with a iconic cold open - David Byrne taking the stage to face a crowd of thousands expecting a full band rock show with only a guitar and a boombox. You get to then see the band and the stage built over the course of the show.

We built our band up in a similar way in our show, using curtain reveals and entrances from both backstage and the downstage left stairs at Ottobar to give a sense that it was coming together in front of the audience's eyes, building up the core band of instrumentalists over the first four songs and then adding backing vocalists, then horns, and then dancers to give a sense that the show was growing to a tremendous size.

What we added was that each song was led by a different singer. This for us was how we made the show about Baltimore - that we brought in a lot of the city's best and brightest from across a wide variety of genres to be together on one stage for one show. We wanted to tell the story of a city that's got fantastic scenes for rock, for hip hop, for punk, for indiepop; that this place and its artists have so much to offer and so much amazing breadth of skill in music & performance. The Talking Heads' music has a lot of different influences in it, and we wanted to have each singer take the songs and add their own flair to it. It's how Shawna Potter of War on Women made "Slippery People" punkier, how Eze Jackson made "Crosseyed and Painless" into a club banger, how Landis Expandis made "Once in a Lifetime" into some sort of insane pop rave-up. We made living music, made by breathing people, because we allowed the performers to breathe life into the songs and not just cover them.

It was super important to us to stage a diverse cast of artists for a number of reasons. Partially it makes the art better, and allows for more breadth in the performances. Partially it's about the communities of the city, and how we can use art to bring people together and break down barriers and create equity and understanding and love and support. I believe that there is a beautiful way of showing the ideals of the world we're trying to create in the largess and sometimes messy energy of a show like this at a place like Ottobar.

We also felt like working with the Talking Heads as source material gave us latitude in such a fun way. In a show with a dance with a lamp, a song played along with a boombox, and times when the lead singer runs laps around the stage, it felt like any element was allowable that heightened the immediacy and the energy of the performance. I said a bunch of times during the run up to the show "it's everything and the kitchen sink" and I think that we really lived that onstage.

We filmed the Sunday night show with six cameras and took a 32 channel board recording, and a full high quality video of the performance is forthcoming.

In 2018 Trucker Talk recorded a score for a short film by acclaimed animator Lynn Tomlinson. We took source material written by Lynn and her son Sam and developed it into a lush song and fleshed out score for the film. It tells the story of Old Bet, the first elephant brought to the Americas, which sparked the beginning of the American circus as we know it.
The film premiered at the Maryland Film Festival, and has won numerous awards all over the world. Two of them have been for the music, including "Excellence in Music" by ASIFA East and "Best Music" at TOFUZI 11th International film festival.
As the film  is still in consideration for festivals the entirety is not available online yet, but an excerpt is included here.

The Last Waltz in Photos

Before I took on the role of music director for The Last Waltz, I had never done anything remotely like it before. But as soon as I was in the thick of it I found my footing, from casting roles to writing charts to leading rehearsals. There was something special, magical about the film and the event it captured - a "one night only" sort of feel, and we wanted to capture that. The amazing group of people they pulled together for that concert - Neil Young, Joni Mitchell, Muddy Waters, Van Morrison, the list goes on - made for both amazing source material and for a daunting show to mount.

The casting was super important to us. We wanted to really have people not only were great performers but who understood and lived their roles as the different guest performers on the show. So when we asked Landis Expandis to be Muddy Waters, he didn't just come sing "Calendonia," he needed to be in a suit and be larger that life (which luckily comes easy enough to him.) When we asked Abby Becker to be Bob Dylan she came in a leather jacket bolo tie and shades, and had us rework "Forever Young" to be an emotional rollercoaster from soaring big notes to hushed quiet ones.

Despite it's limitations there in many ways couldn't be a better place to have a show like this in Baltimore than at 2640. The setting there helped to create the feeling we were looking for, that this was something important, a night to be remembered. Working in 2640 isn't always easy, and probably the biggest feat of this show was getting the sound up. We brought in every piece of sound equipment and maxed out a 32 channel board, prompting Sandy Robeson to utter "Dear god what have you DONE" when she came to soundcheck for her role as Emmylou Harris.

Onstage was a whirlwind for me, having to direct traffic during the songs with the band and keep everyone together, play the bass, sing, and then MC all the changes happening between songs. It made for a show I didn't really appreciate until it was over.

Photos by Human Being Productions.

In 2015 my band Hollywood Blanks participated in the Mobtown microshow series, playing a three song set for a small live audience packed into the band room at Mobtown studios. I can be seen playing bass guitar while color matching my instrument with my shirt and doing my best to keep my hair flying the whole time.

To make a festival where there wasn't one before a big task was to develop a brand. We thought hard about our core concepts and developed a set of images and ideas that inspired a whole array of different art, from the festival logo to a way of graphically representing our somewhat complicated schedule to our safer spaces posters and a clear way of identifying staff to the actual mixtapes that we made. Though a number of other people's work is in here, the main credit for a lot of this should go to Landis Expandis, who worked with us to design the initial tape logo, which then became our main image that was used over a bunc of media.

With my ensemble Trucker Talk we live scored two performances at Light City in 2018 that told the histories of each neighborhood through shadow puppets. Artist Maura Dwyer led the project, and did months of research and oral histories to provide a deep and rich catalog to glean stories from.

The show was challenging in many ways. We developed a score that had to be flexible enough to play along with live puppets in a way that would help provide drama but not overpower the voiceoever that Maura was giving. It was also quite cold, as Light City often is!