Rebecca Rothey studied photography under Geoff Delanoy while working towards her undergraduate degree in philosophy at the University of Notre Dame, Maryland. She was an adult, part-time student and photography allowed her a much needed creative respite from the pressures of work and school. She learned photography by developing film and making gelatin silver prints using traditional darkroom techniques.  She has continued making images since her graduation in 2007, now working solely with... more
View Rebecca's Resume

Photography offers me the opportunity to be in the world while I also floating outside it. When I am immersed in making candid photographs, I slow down and enjoy moments that I would otherwise miss. Time stops, my mind frees while my eyes roam and my finger clicks, almost on impulse. I enjoy finding playful or ironic situations while also seeking classic moments and settings. I make photographs because there are endless dramas, large and small, to be enjoyed when my mind quiets down enough to listen.

This project offers an overview of my candid imagary from the first image made in 2006 until the present.

Throughout the time I have been making images, I have enjoyed the intimacy of making portraits with strangers. Often very brief, those interactions still create unique connections based on shared humanity. I deeply appreciate those willing to share those moments with me.

Like many photographers, I have enjoyed making images with my family over the years. Here are images of my father Sam, my brother Alan - a very handsome man - and my husband Jim. Jim has been a generous partner with my image making. I have also included one self portrait made during a photography workshop.

This is a portfolio of images of  the people I encountered  in 2015 while traveling in Southwest China as a participant in aDout Beasley's Vision Quest workshop. The workshop was based in the Ancient City of Dali, a region that has over 30 ethnic groups.  Making images with the indigenous people provided an opportunity to engage with them despite the language barrier.

I made this series over a period of several months, ending with the onset of the coronavirus pandemic. Initially, I was interested in finding candid moments and thought Lafayette Square would be a good location. I was soon drawn to the people making selfies in front of the White House. The White House Fence Project added an unexpected degree of irony and poignancy. People still gathered to take selfies despite the ugly white barricade and increased distance. The project explores the respect people of all ages and origins have for what the White House represents, no matter its occupant, and the diversity just outside its doors.

Every day, hundreds of visitors make images of themselves in front of one of the world’s most iconic buildings - the White House. They come to pay homage to its current occupant. Or to spite him. Or in spite of him.

Cidentally, I began making these images just as the White House Fence Replacement Project started in 2019. At first, I thought the barriers and added distance would be a distraction from my intended subject - people enjoying a view of the White House. Instead, the Fence has become a symbol for what this series now conveys.

Certainly, it’s ironic that a 13’ 1” steel barrier with undisclosed “state of the art” people-repellent features is being built during the tenure of President “Build the Wall.” Despite the White House’s added distance, the ugly white barricade, and the movable black metal barrier, people still assemble. They find a place where they can see the White House. They make pictures of themselves. They smile. They represent divergent political views, numerous countries. They are people of all backgrounds, ages and faiths.

They stand side-by-side honoring a symbol of democracy and freedom that unites them. Despite them.

During my artistic explorations, I have enjoyed contrasting natural found objects with antiques. This series was made after I had learned to paint with light. The images were made with long exposures, typically several minutes, in full darkness while lighting the subject with a flashlight. I enjoyed creating images inspired by word play.

One Step at a Time

Steps. We use them daily, but how often do we stop and look at them: their textures, colors, cracks, uniformities, changes? Are they aged or new, sterile or welcoming? Are they leading to a place we wish to be or to an as yet unknown destination? Through my lens, I am observing places where life’s passing moments usually go unnoticed. I am observing them “One Step at a Time.”

This project began with a single step ... photo that is. Having made one image of a riser, I found that this way of seeing spoke to me. It evolved into a project I worked on most intensly from 2013 until 2017.

During the Covid-19 lockdown, I was in 25-30 Zoom meetings/week. I was struck by the new language that developed during those meetings, such as "You're muted." As the stress of endless Zoom meetings and anxiety-producing world events increased, I needed a creative respit away from my computer. I dusted off my old drawing skills and began drawing cartoons playing on the newly developing language and circumstances. Thus the series title: Zoom and Doom.

Cartooning inspired me to develop my drawing skills. Since my cartoons used ink markers, I continued to work in that genre. I find my interest in drawing still lives consistent with my interest in photographing them. Both genres combine natural objects with antiques and have some form of visual wordplay or playfulness.

Spending time drawing inspired me to explore watercolor painting. My mother, Ginny Baier, was a Howard County-based watercolor artist. Her paintings fill my home. I kept her watercolors and brushes after she died in 1998. My watercolor teacher, Diana Marta (also based in Howard County), knew my mother. (I encourage you to view Diana's Baker Artists portfolio.) In addition to enjoying the challeges of this very difficult medium, painting has opened an exploration of feelings in an unexpected way. 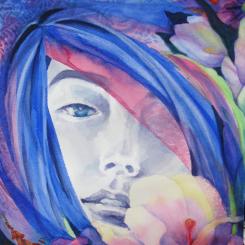 A study of a face - Intensity 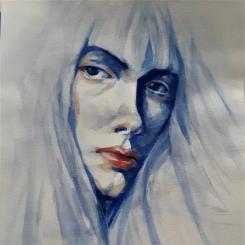 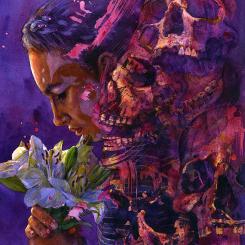