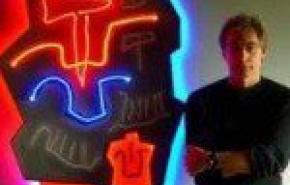 Quentin Moseley has been on the faculty at the Maryland Institute College of Art since 1974, as a member of the Printmaking Department. He has been chair of the Printmaking Department, the Foundation Department, and has been Coordinator of Health and Safety at MICA. He received his MFA in 1972 from The Hoffberger School of Painting and BFA from Syracuse School of Art in 1970. The “Museum of Pre-History” is the context through which the artist appropriates ancient Paleolithic, Neolithic, and Bronze Age... more
View Quentin's Resume

“CAVE RAVE” is the central artifact of “The Caveman’s Dictionary”, only a small portion of a large body of work that the artist entitles “The Museum of Pre-History”. The Museum explores the psychological development of human kind through “Archives” and “Artifacts” drawn and built from experience of site explorations in Europe and research by the artist. The artist visited 8 Paleo-lithic cave sites in France and Spain for inspiration for developing “The Caveman’s Dictionary”.

During its installation, “Cave Rave” becomes a “performing painting/installation” that is an imaginary archeological puzzle of a paleo-lithic cave painting. The painting is changed by the artist during exhibition to explore meaning and the balance between language and abstraction vs. perception and intent. The artist explores the use of archeology in puzzling together insights into who and what we are. During the exhibition, the artist continually changes versions of the two- layered painting.  A culminating performance (20 minutes), entitled “The Incantation of The Caveman’s Manifesto” is used to bring together the puzzle and explain the meaning of “Cave Rave” and the magic of “The Caveman’s Dictionary”. The painting is physically changed from abstraction to representation during the performance, as the artist reveals the meaning of each of the 13 puzzle pieces as well as revealing a piece of who and what we are as creatures on earth.

The two layers of “Cave Rave” (8’x 16’ overall) are built from a substructure of wood, with sculpted insulation-foam layers, painted with water base paints and glazes.

Each of these artifact/restorations comprising "Caveman Constructions" comes from one of several bodies of work (excavations or digs) comprising the paleolithic collection of The Museum of Pre-History known as "The Caveman's Dictionary".

"The Caveman's Dictionary" consists of: Caveman Story Stones, Caveman Codex Stones, The Power of Three Stones, Paleo- Couples, and others.

Each of the drawing series has three to nine variations to elaborate the subjects of the Museum's excavations or digs.

Neolithic Neon (The Stones of Morbihan)

These artifact restorations are based on visits to the ancient menhirs and dolmens of Brittany, some of the oldest megalithic sites in Europe dating from 4500 BC. Many of these sites surround the Gulf of Morbihan, where the amazing site of Gavrinis resides on an island in the middle of the Gulf.

The series is called collectively, "The Stones of Morbihan" or descriptively: Neolithic Neon

All of the images in this excavation,
reference the positioning of an upright megalithic stone (menhir)
with an upright sculptural form referencing a figure
on a base platform or plinth.

Several series of Neolithic Prints have supported the research for Neolithic Neon.

"Gateway Baltimore", a slow moving animated neon mural installation  was commissioned by and developed for Light City Baltimore, 2016......the first  international light art festival of the city.
This piece was created out of a modular system of 6' sticks and 4'  circles of neon to bring together a  frieze of neon that speaks of change and unity and bringing together......a metaphor for Baltimore itself  as it searches for new definitions of working for a united front in dealing with the challenges we confront together.
The  structure and neon components of this mural can be re-arranged into any configuration the artist chooses for re-installation, preferably on the parapets of high rooftops of  buildings that can be viewed from great distance, inviting one to the location for close-up viewing.
Compare this installation to other animated neon projects/murals in the "Night Drawing" section.....many installeded in Baltimore, as well as other cities.

During the 1980s these large scale, outdoor public art pieces were temporarily installed under the name of "Night Drawing".
They started as an undergraduate design project at Syracuse (1969) with a modular system of 6' sticks of yellow neon and some 24" red squares.
The largest piece to date was two 8'x100' animated murals in multi colors on either side of the 26th story of a building in Miami.
Night Drawings were temporarily installed in Philadelphia, Portland Maine, Memphis Tennessee, Miami Florida and many in Baltimore, MD.

These constructions and prints relate to the shapes and action of the large scale animated neon "Night Drawings" of the same time period.
The smaller scale allowed the exploration of a number of different references for the forms that were of interest at the time. 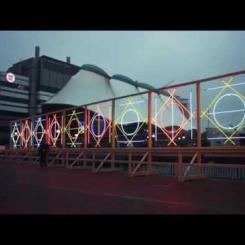