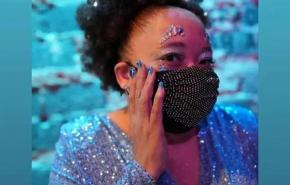 Petula is a multi-talented artistic being. She is a writer, performer, creator, producer, recording artist, non-profit executive, and arts administrator whose work often examines various themes around gender, sexuality, sensuality, and race. She brings her compelling creative envisioning to everything she works on. She got her artistic start writing erotica when she was published in New York Times bestselling author Zane’s erotica anthology “Caramel Flava." Petula has published two volumes of her own... more
View Petula's Resume

This project was the first project Petula took on as Director of Community Engagement for BROS.

Petula wanted to widen the scope of the organization's creative output. She wanted to find ways for the wealth of Baltimore's  creatives of color to feel empowered to take advantage of the opportunities to tell their stories through productions with BROS. And because BROS had traditionally not done well with showcasing those talents and telling those stories, Petula began conceptualizing ways to change that. She created a concert series of three separate shows that would tell the story of how rock music and rock musical theater grew out of the traditions of the African rhythms that are the foundation of  Blues music. The series musically demonstrates how rock and roll, a creation of Black musicians finding new ways to play Blues music, evolved in a way that strategically erased its non-White creators. The series also examines how rock music became part of musical theater, how creatives of color elevated that art form, and offers one vision of how the future of  all creative landscapes can look when all people have equal access and no type of representation is closeted.

The three part concert was originally intended to be live performances, but the arrival of the pandemic forced those plans to change. The concerts were moved them to a totally live-streamed format, and the shows took place in July, August, and September 2020. The first concert, called "American Music", was staged on the loading dock and brewing area of Peabody Heights Brewery. It focused on African rhythmic traditions, Blues music, and classic rock music created by Black musicians and vocalists. An encore performance of this show was performed for The Kennedy Center as part of their "Arts Across America" series.  After the first concert, Creative Alliance partnered with the project as presenting sponsor, and allowed the last two concerts to be staged in their space. The second concert, called "Onto The Stage" spotlighted classic rock theater musicals like Hair and Tommy, and spotlighted Black interpretations of this format as presented in shows like The Wiz and Dreamgirls. The final concert, "Into The Future," spotlighted Afrofuturistic musical sounds, styles, and lyrics. All three shows included narration performed by Petula, which ranged from interesting facts about the subject matter to poetic and inspirational words from Nikki Giovanni, Audre Lourde, Octavia Butler, and others.

Petula reached out to numerous Black creatives to help elevate the artistic vision, from singers and songwriters to musicians and craftspeople, who worked with her to create these shows. The original live streams of these broadcasts were very well received, and to date the series has been viewed by tens of thousands of people.

After the success of Rock Opera 101, Petula wanted her next effort to be a bigger, more expansive stage production. With COVID vaccinations available and the slowdown of COVID transmissions creating a feeling that it might finally be safe to gather in person and create, BROS felt more comfortable with productions that would require more in-person interaction - costume and set building, etc. But new variants kept creating concern throughout 2021, and because of this, the original plan for this show was revisited and revised many, many times. Everything from the number of shows to the type of shows to the number of seats in the theater fluxuated throughout pre-production. Ideas for the show were created, then cast aside as COVID concerns impacted casting, staging, rehearsals, etc. But Petula and her production team met these continued challenges head on, and the end result was "Funktopia - A Super Afro Intergalactic Tribute to Funk and Hip Hop". This theatrical tribute concert introduced show attendees to Funktopia - a world existing on the North Star, where descendants of enslaved Africans live in joy and peace, free from the oppression their ancestors faced.  A wide representation of skin colors, gender expressions and body types are visible onstage, and the spiritual and the sexual exist in a beautifully balanced way free of shame, guilt, and hurt.  This show brings a triumphant celebratory lens to Afrofuturism, daring to show what the world might look like in a future past the trauma of oppression, and joyfully presents music, movement, and traditions from this perspective. The show was staged at the newly re-opened Voxel Theater on 25th Street in Baltimore.  Petula served as Executive Producer and Co-Creative Director for the show, which sold out three performances on September 10th, September 17th, and September 24th in less than 48 hours. The final show on September 24th was also live streamed on You Tube.

She's Such A Bright Girl - An American Story

"She's Such A Bright Girl: An American Story" is Petula's memoir, published in 2018. It is the story of her upbringing in the 1970s and 1980s in Paterson, New Jersey and Baltimore, Maryland. It chronicles her struggles being raised by a father who went to great lengths to raise her to be as "White" as possible. The book received an honorable mention by the North Street Book Prize in the category of creative non-fiction.

Conforming to Whiteness for Petula meant straightening her hair at an early age. It meant being surrounded with White dolls, White authors on the bookshelves, and White artists on the walls in their home. It meant not attending an HBCU, despite her burning desire to do so, and being accepted at one. Ultimately, it meant always being aware of how White people viewed Black people, and always behaving in ways that would make White people comfortable and unchallenged. In exchange, Petula would achieve upward mobility and escape the trauma that her father knew was inescapable as a Black woman in America.

Petula's parents came to New Jersey after the coal mining town they both grew up in started to go into decline. While lots of Black people migrated north to find manufacturing jobs throughout the early-to-mid 20th century, Petula's father had plans that went beyond financial security for his family. Once Petula, a very fair-skinned girl, was born, her father realized her light-skin could give her a great advantage in a world that didn't value Black people in general and placed a special burden of oppression on those who were darker-skinned. He realized because his daughter was so light skinned, he could raise his daughter to not only know how to navigate the White world successfully, but he could also raise her to see herself as a White person, and to perhaps convince others, or society in general, that she was White too. He wanted her to “pass”. To him, this would give her a better chance at success and prosperity in life. But while doing this, he created a tremendous identity crisis in Petula, who had to fight the massive fear, lack of confidence, and raging insecurities that sprung up in her from a very early age because of her upbringing – an upbringing already challenging because of her family’s race, class and status in society.

Petula has shared stories from this book at all kinds of events, from community conversations at branches of the Enoch Pratt Library to audiences at The Baltimore Book Festival and at Stoop Storytelling.

While Petula isn't quite old enough to remember the radio programs that would broadcast pre-television with fully produced and narrated stories and sound effects to boot, she always found the idea intriguing. While her writing involved storytelling with words alone, and her performing added her voice and visuals to her storytelling, she wondered about the possibilities storytelling with just words and accompanying sounds might offer to a modern audience who isn't used to only using their ears to take in a story. And if the story had sensual or sexual overtones, how would only having one set of senses to perceive it impact the listener? How would a writer need to tell a story if the only cues you gave to your audience are audio cues?

The end result of her wondering about these things was "Unusual Positions - Volume One." (The only volume actually.) The audiobook included three stories - "Footsie," "Lingerie," and "The Instrument."

While writing for City Paper, Petula often found herself covering Arts, Entertainment, and Culture, and she often found herself interviewing other artists. Through this network, Petula found opportunities to move her written work from the page to the stage by collaborating with producers, performers, and musicians. A collection of poetry and short stories Petula was working on became a poetry CD entitled "The Eargasm" that she released in 2009. This CD included live recordings of her performing her poetry at one of the city's most popular open mics, and one of those recordings became a small hit song in the house music community. As Petula moved from small spoken word poetry venues to larger stages featuring variety acts, Petula added a live band and backup singers to her poetry performances, and added a few cover songs to her repetoire of original poetry set to original music. Soon Petula realized she had an act, so she promptly began booking peformances - first locally, then regionally, and soon she was performing up and down the East Coast.