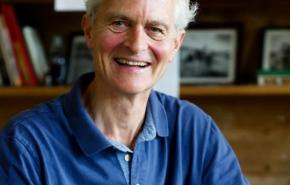 Patrick Smithwick is the author of the award-winning Racing Trilogy including Racing My Father, Flying Change, and Racing Time.  He’s also written the histories: The Art of Healing, Union Memorial Hospital, and Gilman Voices, 1897 – 1997.  Patrick is now completing the memoir War’s Over, Come Home: A Father’s Search for His Son, Two-Tour Marine Veteran of the Iraq War, which he plans to publish in 2021. Racing My Father: Growing up with a Riding Legend  (pub. 2006) is a moving memoir... more

Racing Time: A Memoir of Love, Loss and Liberation

Racing Time is a book of searing intensity shining a healing light into the wounds of loss. Most of all, it is a celebration of life-long friendships with three men--each outspoken, authentic, and a lover of the out-of-doors. In a period of nine months, Smithwick delivers the eulogies of these three who have been his nexus to the world of steeplechasing and Thoroughbred racing. Written to stand on its own, Racing Time is the third of a trilogy, following the memoirs Racing My Father and Flying Change. It continues with the vivid prose and sensory descriptions of the first two books, then takes a different path, delving deeply into the psyche of men, showing one man's love and respect for another, sometimes his anger and disappointment, and always his sense of loyalty and wonder. Smithwick takes the reader through the joy and excitement of shared youthful experiences, into the camaraderie of adulthood, and ends with the clap of a thundercloud calling on us all to live life to the fullest.

Praise
"The primary topic of Racing Time is not horses but rather male love.  It is dedicated to the late Tom Voss, Racing Hall of Fame trainer. Tom, and Patrick’s challenge of accepting his mortality, stand at the centre of Racing Time. Teasing out the subtleties of their relationship, Smithwick ventures into contemplating the role of other men in his life as he makes his own progress as a man.  "

"Racing Time arrives just as western culture is preoccupying itself with the quest to redefine masculinities, in all their plurality. The book is about male bonding—between friend and friend, between family members, between colours, between classes, between father and son, mentor and pupil. It goes beyond naming these bonds: it enters into the heart of them. To be fair, Smithwick also explores the love of man and wife, man and mother, man and daughter. He is full of love. Any novelist who created a character as original, as compelling as Speedy Kiniel—Smithwick’s ‘blind Tiresias’, inconvenient savant—would be hailed as a genius.  Speedy Kiniel, the one-time stable groom, musician and boxer, approaches the late years of his life as obese, demanding, ungrateful—yet wise, deeply wise, endlessly wise. Speedy has healing hands, for the damaged legs of horses, for the bruised limbs of jockeys. He spreads that balm over the pain that makes its presence felt throughout this remarkable memoir. America, Patrick Smithwick might just have given you a modern masterpiece, if you have the eyes to see it. "
- Dr. Andrew Lemon, author of the three-volume History of Australian Thoroughbred Racing

"Racing Time tells the stories of four horsemen, their triumphs, adventures, horses, families, and most of all, the camaraderie of their lifelong friendships. Their lives are so vividly described that it seems as if the emotion, excitement, and exhilarating moments are unfolding in real time.

"What happens, however, when three of them pass away?  How does the one that is left cope with the loss, honor their great bond, yet continue forward with life? Racing Time shows how you can integrate the pain of loss into the joy of the moment; how you can live with happy memories—not grieving ones—as the legacy of lost friends.

"Racing Time will make you laugh, will make you cry, and will leave you with the comfort of three little words . . . love never dies."
- Cynthia McGinness, owner and breeder of 2018 Maryland Broodmare of the Year Casual Kiss

Flying Change: A Year of Racing and Family and Steeplechasing

Patrick Smithwick's new book Flying Change is every bit the sleek, well-bred and fast Thoroughbred as its predecessor, Racing My Father.

In Flying Change, he is no long racing his father. He is racing himself – while continuing with his duties as a father, a friend, a salary earner, and, importantly, a writer.

This memoir of dueling ambitions is the riveting tale of a man who decides in mid-life to call off all restraints, silence all naysayers, put his mind and body and courage to the test, and do what in his case – he has been away from the world of racing for twenty-five years – is the impossible: within a nine-month period get a horse to ride in the most difficult steeplechase race in the world, and then, ride that horse as if his life depends on it, which, literally, it does.

Flying Change is an inspiration for all baby-boomers, for anyone who thought he could never compete again. If you’d like to know what it’s like to be a member of the elite racing set, if you’d like to experience a foxhunt at it’s most exciting moments, if you’d like to vicariously ride in the Maryland Hunt Cup, then this is your book.

Yet, it is not just a book for horse lovers.  Flying Change is a portrait of a father’s love for his children and a narrative portraying how Smithwick carries on traditions from his upbringing, described in Racing My Father, and applies them to the raising of his own children. These sections are positive, upbeat, father-affirming.

Indeed, fatherhood is a topic sorely missing in the American canon. Books dealing with fatherhood are most often ones written by a son or daughter describing his or her mistreatment. Smithwick fought against that formula in Racing My Father, a loving testament to his father, A. P. “Paddy” Smithwick, the legendary steeplechase jockey.

In Flying Change, Smithwick goes against the grain again. He writes, as a father, about his children, every sentence exuding his love and care for them. He addresses the question of what it means to be a father.

All is not peaches and cream. Tragedy in the form of death, paralysis, suicide lurks in the background.

Flying Change is a must-read for the general audience as well as lovers of the horse and Thoroughbred racing. Pick it up, open to any page, and you won’t be able to put it down.

Praise
" Flying Change will reward anyone who has feelings about family, about being young, about growing old.  It will move you if you know how it feels to ride a racehorse or only wish you did.  A frank, funny, tender love song to knowledge and connections that never should be lost, even as generations move along."
-Dorothy Ours, author, Man o'War: A Legend Like Lightning

"Flying Change is poignant, uplifting, and written with the same informed sensitivity Smnithwick demonstrated in Racing My Father. The book will resonate not only with those who care about horses, steeplechasing, and the Maryland Hunt Cup, but also to anyone puzzling over the complexities of family, marriage, and the merciless passing of time.
-Peter Jay, former reporter for The Washington Post and columist for The Baltimore Sun

Patrick Smithwick has written an unusually moving memoir about growing up in the hell-bent-for-leather world of Thoroughbred racing as the son of Hall of Fame steeplechase jockey A.P. "Paddy" Smithwick. Racing My Father is the story of a son working alongside his father throughout summer mornings, and then hopping in a "hot car," windows up, heater blasting - so his father can sweat off a few more pounds - and driving his father to the track where the races will be held in the afternoon. Paddy Smithwick was a natural. He was a charismatic figure. He was the greatest steeplechase rider in America in the 1950s and '60s, winning all the big races, leading the country in raes won four times, dominating the sport with his style, ability, heart, and gentlemanly demeanor.

Patrick Smithwick is also a natural. As a jockey, he won steeplechase races. As a writer, he's won awards. There are hints of the innocence of Huck Finn as Smithwick starts off his account of serving his apprenticeship with his father. The innocence ends when his father is paralyzed in a bad fall. Yet, the youthful Smithwick helps his father work his way back into racing, and the father-son, trainer-rider team ends up in the winner's circle at Saratoga Springs. Smithwick has recreated his own Yoknapatawpha County - with its gritty backsides and polished clubhouses, its knotty characters and sleek racehorses. Racing My Father is not just another "horse" book. It is a fast-paced memoir ranking in the stakes race category with Russell Baker's Growing Up , Frank McCourt's Angela's Ashes , Annie Dillard's An American Childhood , and Beryl Markham's West With the Night . Racing My Father is a breathtaking ride over hurdles, with a whipping and driving finish, that catapults the father-son team of Paddy and Patrick Smithwick back into the winner's circle.

Praise
“Patrick Smithwick’s bittersweet memoir wonderfully captures a racetrack culture that he was born to and loved. But he also shows, with such wrenching emotion, how he struggled, in the parlance of his sport, to change leads in his own life. The portrait he draws of his father, Paddy — a man both lovely and tough — is absolutely endearing. We can see it wasn’t easy for the author to be Little Paddy. But it was glorious, too."
- Frank Deford, author, commentator and sportswriter

"Patrick Smithwick, a horseman and journalist, writes with real feeling about memories of growing up with his late father, Hall of Fame steeplechase jockey A. Patrick “Paddy” Smithwick. Believe me, this is great reading, whether or not you’re into steeplechase racing.”

- Peter Winants, author of Steeplechasing: The Complete History of the Sport in North America

War’s Over, Come Home will take your breath away; it will exhaust you; it will infuriate you; it will inspire you.  Patrick Smithwick brings the reader on a two-year quest for his son, Andrew, two-tour Marine veteran of the Iraq War, who is running away from war memories, nightmares, hallucinations, and those that love him.  This is a book for our times as well as a memoir that will last; its focus on the life of one homeless veteran and his family is a microcosm of the national nightmare 50,000 homeless veterans and their families are living.

Along the way, you’ll meet a wide-ranging, heterogeneous cast of characters, and each homeless man or woman, whether “Big Eyes,”  “Tim O’Brien” or “Lee Marvin,” whether  Cathy, Glitter or Drew; each helpful flight seatmate, soup kitchen employee, homeless shelter social worker, or Vietnam Veteran begging on the sidewalk, becomes a real, living breathing individual through the author’s interaction—his empathy, his curiosity, his ability to communicate at the drop of a hat with anyone on the street—and then his bringing the character to life on the page.

War’s Over, Come Home is a full-throttled, emotion-charged search-and-rescue mission conducted in splintered pieces of America that have broken off from the bright primary-colored jigsaw puzzle of the “United” States we grew up fitting together so neatly in first grade, a jigsaw puzzle now consisting of battered, isolated, hidden fragments of America that are impoverished, malnourished, destitute, drug-ridden, crime-encrusted, and have no laws besides survival of the fittest.

Yet, with his fresh, energy-infused and indomitably-positive voice, along with his self-deprecating sense of humor, Smithwick imbues every chapter with hope: hope for his son, hope for his marriage, hope for his country.  This is a memoir of love and perseverance and hope.