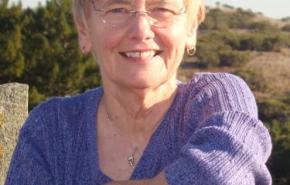 I am a Unitarian ex-nun lesbian grandmother...so I have spent much of my life confronting and trying to resolve conflict--in the context of a dramatically changing world.  Thus many of my  plays reflect a life-long obsession with values: how they are formed, challenged, changed; what happens when they are inadequate, misguided, conflicting.  The themes of my plays include faith and forgiveness, religion and repression, challenging authority... more
See 2021 $2,500 Baker Artist Award Winning Portfolio
View Pat's Resume

Based on this script, the playwright was awarded a month’s residency at the Djerassi Resident Artists Program in Woodside, California, and an Individual Artist Award by the Maryland State Arts Council.  The script was a semi-finalist in the Bay Area Playwrights Festival and was given a reading in the Baltimore Dramatists Guild Footlight Series.  It was a semi-finalist for the 2019 Eugene O'Neill National Playwrights Conference.  As a consequence of being a winner in the AACT New Play Fest 2020 contest, it premiered at Tacoma Little Theatre, WA, in January, 2020, and scheduled for 2021 publication (after a COVID delay) by Dramatic Publishing.

POPE JOAN II is a RUBYS grant-winning project and an ​MSAC Individual Artist award project.  It has had professional readings at Rep Stage in Columbia, MD and at the  Shaw Society of London, UK, where it won the T.F. Evans Award.  It was a semi-finalist in the Bridge Initiative, AZ, and enjoyed a reading at Cumberland Theatre, MD.

Pat has always been drawn to big ideas; her plays tend to frame the largest human questions that have always tempted dramatists.  No fractured American families of four re-hashing the past in a living room for her.  A Montley play tackles themes of faith, the afterlife, racism, gender and sexuality, mysticism,  historical and political process, justice, education, the beleaguered good, and the persistence of evil.

And yet there is an irrevocably fractured family of three at the heart of PJII, Pat’s fanciful "What if?” comedy about the papacy in the contemporary world.  What if an American nun with Buddhist tendencies and a mission for social justice finagled her way into the Vatican?

More important, what would she do when she got there?  Aided by her spirit guides—Joan of Arc and Pope Joan I,  the 9th century subversive—Sister Joan reaches the top by the end of Act One, but her policies are leading the Church to Schism from the conservative male cardinals headed by Henry Cardinal Gardiner, whose secret connection to Joan…but enough plot.

PJII is fanciful, theatrically vivid,  a high-stakes look at the interwoven crises—political, environmental, religious—currently threatening to sink the globe for good.  In this play, Pat is shaking Shaw, Paula Vogel, and Joe Orton in the same blender of satire and dialectic in order to come up with a fresh start for the world.

The reading was a huge success.  Any worries that the play was “too Catholic” were swept aside by the laughs, the engaged silences, and the spontaneous bursts of applause throughout.  All audiences have a stake in the future of the planet.  Pat Montley’s PJII is a hilarious reminder (and a wake‐up call for those who need it) that when the going gets tough, no question, put a woman in charge.

Based on the submission of this script's first draft to the Pennsylvania Council on the Arts, the playwright was awarded a fellowship.  Based on submission of a revised script, she was awarded residencies at the Millay Colony for the Arts (NY) and the Djerassi Resident Artists Program (CA).  The script was a finalist in the Bay Area Playwrights Festival and a semi-finalist in the National Arts Club  (NYC) Playwrights First Award.  It was given a professional reading at the Abingdon Theatre (NYC), was a finalist in the New Harmony Project, and received Honorable Mention for the Jane Chambers Award.
​

​This play was produced at the Edinburgh Fringe Festival after being given readings at the Pittsburgh New Works Festival and the Baltimore Playwrights Festival.  It won the Kaleidoscope Arts Festival Playwriting Contest, placed second in the Goshen Peace Play Contest, and third in the Kernodle New Play Competition.  Its writing was supported by the Djerassi Resident Artists Program (CA).

DANCING THE GOD has been produced at the Nebraska Repertory Theatre in Lincoln, the Burbage Theatre in Los Angeles, and the Women’s Project in Ft. Lauderdale.  It was a finalist in the Actors Theatre of Louisville National Playwriting Contest and a semi-finalist at the Florida Studio Theatre Mini Festival.  It has enjoyed readings at Notre Dame of Maryland University and Palm Beach Drama Works.

THE SHAMAN, THE VIRGIN, AND THE CRONE: A WINTER SOLSTICE FANTASY

The first draft of this play was completed while the writer was in residence at the Millay Colony for the Arts (NY).   The script made it to the final round of reading at Kitchen Dog Theatre in Dallas, was a semi-finalist in the New Works Multistages Contest (NYC), and a finalist at IATI Theatre (NYC).  A selected scene was given a reading at the Inkwell Theatre (DC).

ROSVITHA'S REVIEW, winner of the Jane Chambers Award, was a regional finalist in the American College Theatre Festival.  It was produced at Chatham University in Pittsburgh, Loyola University in Baltimore, and the Castle Theatre in Hyattsville, MD, and given a reading at NYU Tisch School of the Arts.

The Competent Heart was a final finalist in the Actors Theatre of Louisville 10-Minute Play Contest, was given a reading at the Women’s Project in Ft. Lauderdale, FL, and productions at the Women’s Project at Theatre Project in Baltimore and Love Creek Productions in NYC.  It is published by Dramatic Publishing in 25 in 10: Twenty-Five Ten-Minute Plays.