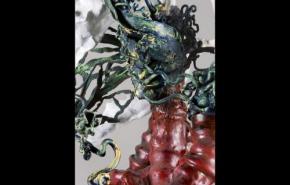 Nicole Fall is an artist educator who makes three dimensional objects in clay, welded steel and cast bronze.  She has also taught art in a diversity of settings for most of the past 30 years : senior citizens in senior centers,  as a founding teacher of George Washington Carver Center for Arts and Technology, as Associate Professor at Baltimore City Community College, Baltimore City Public Schools, and as an adjunct professor at MICA, and Loyola University and as a visiting artist at Kyambogo... more
View Nicole's Resume

This is a portfolio of sculpture in clay, welded steel and cast bronze dating from 1989 to the present. I was born and raised in Washington DC where I was fortunate enough to experience the excitement and turmoil of the 1960s. My mother is an artist and my French father was a journalist during the VietnamWar (where he died in 1967 after stepping on a landmine). I lived in or traveled to other countries as a child, based often on my father's work; Campuchea ( Cambodia), Algeria after its war for independence from the French. My father was also a professor at the historically Black, Howard University.

My father's sister, my aunt, told stories of  the horrors of the Holocaust (my grandmother and other family members died in concentration camps). She and my father participated in  resistance activities; my young-teen age aunt hiding in a convent, teaching Jewish children new identities so they could go live with Christian families, my father and grandfather joining the French Resistance (my grandfather was tortured to death by Nazis). I would go with my father to the hospital to visit a friend of his who had driven over a landmine in Vietnam, coming eye- to- eye with the results of violence and war.

From all of these experiences I developed a world view and while I lived a priviledged life, I had some understanding of trauma. This understanding has influenced my teaching and my art work.  I was raised to question authority and the assumptions of a White-dominant culture. My art teaching career has been focused on equity, and the empowerment of students through the enhancement of critical thinking skills.

My sculptural work uses the forms, color, and, at times, the merciless forces of Nature to consider the human condition- along with a dark, absurdistsense of  humor. I am sensitive to the characteristics of each of the media I work with. The physicality of the work ( I studied dance as a youth)  in clay and steel involves a "call and response" where I work with the medium and also incorporate what that medium does naturally. The process is more significant to me than the final result. My sense of  success about the work is based on how much I have learned from the process of making it.

Community - based public art in this context is sculpture that either/and /or; involves working with community to visualize and make a work for that community and  public space, or a work that is commissioned for a an organization or community center. In general it occupies a public space.

Social Practice is art that involves working with people directly as an art form in itself. Hopefully this leads to discoveries for both the participants and the artist. My first jobs ( I had many part time jobs including cooking in a restaurant) out of college involved working at a children's museum making art with the public and going to senior centers throughout Baltimore teaching ceramics. I also have worked with the public at festivals doing hands-on activities and taught in high schools and colleges.

About 10 years ago I realized that the two aspects of working; by myself in the studio and teaching people should come together somehow.

I have made prints in one form or another since childhood ( I come from a family of artists).  Sometimes they relate to my sculptural sometimes not. As with many sculptors I find negotiating two dimensional space quite challenging.

These are community based public art projects that were managed for Baltimore Clayworks. I worked with them from 2000-2003 and from 2017 to the present. In the first case I was the Community Arts Programs Director and in the second, Interim Executive Director and Community Arts Manager.