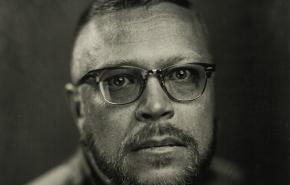 Nate Larson is a contemporary artist and a professor at the Maryland Institute College of Art in Baltimore. His projects have been widely shown across the US and internationally as well as featured in numerous publications and media outlets, including Wired, The Guardian, The Picture Show from NPR, Slate, CNN, Hyperallergic, Gizmodo, Buzzfeed News, Vice Magazine, the New York Times, Utne Reader, the BBC News Viewfinder, the British Journal of Photography, The Washington Post, and many others. His... more
View Nate's Resume

Centroid Towns is a fine-art documentary project using photography, oral history interviews, and local archive research to study the twenty-five cities that have been the mean center of population of the United States. The project puts a face to statistical data, chronicling these towns and their inhabitants to illuminate the ongoing social and political transformation of America.

The Centroid, or mean center of population, is described by the U.S. Census Bureau as “the point at which an imaginary, flat, weightless, and rigid map of the United States would balance perfectly if weights of identical value were placed on it so that each weight represented the location of one person on the date of the census.”  This point is calculated every ten years to accompany the Census, first located in 1790 near Chestertown, Maryland, and moving steadily westward, currently residing near Plato, Missouri. The path of these twenty-five coordinates spans eight states, tracing the population growth of the nation and following the routes of settlement from the Atlantic to the interior. It also mirrors my personal history, linking my home in Maryland to my Midwestern roots in Ohio, Indiana, Illinois, and Missouri.

My project uses this idea of the “symbolic center” of the country as a fulcrum to examine the challenges facing the United States. I have photographed in all twenty-five project cities and am currently working on long-term fieldwork in six of them, with additional fieldwork under development. The chapters of the project completed to date examine the environmental impact of overdevelopment, historical legacies of colonial settlers, the changing face of industrial manufacturing, the evolution of American Christianity, economic pressures created by corporations on small business, and civic engagement in small towns. Baker support would enable additional fieldwork, both continuing the established engagements and the creation of new community partnerships to begin new chapters of the project.

This section is a selection of historical images collected by the artist as context for the larger project. Please see below for samples from the six current chapters of the project.

Watershed Moment is a series of photographs taken in Ellicott City, Maryland, during the aftermath of the catastrophic flood events in 2016 and 2018. Ellicott City was the mean center of population for the 1800 census.

Ellicott City has flooded throughout the history of the town, made worse in recent years by loss of permeable ground cover by apartment complexes, big box retail, and massive parking lots. Hundred-year flood events became fifty-year flood events and are now less than two years apart. The catastrophic flood event of July 2016, and again in May of 2018, lays bare this infrastructure decay as inadequate retention ponds failed at nearby developments and sewer systems designed for an earlier time crumbled, sending a wall of storm water mixed with raw sewage through the historic homes of the West End neighborhood and carrying cars and other possessions miles downstream. Large sinkholes were left in the wake as earth eroded from under homes, sidewalks, and roads. My role is to witness and document these catastrophic events.

I spent the months after the flood events building my relationship with residents, recording their stories and making photographs to document the aftermath. I spent time with a person who was sleeping in a tent in a homeless community by the river and jolted awake as a wall of water carried his tent away. Other residents told of home basements with tapered piles of human feces, resembling snow drifts, where the unprocessed sewage entered and exited the homes. And homeowners, excluded from standard flood insurance, are left to deal with the wreckage, assisted only by meager state and county funds and expensive specialty insurance policies. These photographs lay bare the environmental and human costs of overdevelopment, something that devastates this community and challenges many communities across the nation.

The Secret Good Life is a series of photographs taken with community members of the Bloomington Catholic Worker, a Intentional Christian Community in Indiana, during the summers of 2018 and 2019. Bloomington was the mean center of population for the 1910 Census.

The Catholic Worker Movement was started in the 1930’s by Dorothy Day to perform Works of Mercy for those less fortunate and address the unjust systems that lead to poverty. The Catholic Worker newspaper called on Christians to speak out against social injustice, modern war, environmental injustice, and the triplets of racism, materialism and militarism.

The Bloomington Catholic Worker is a collective of four families comprised of eight adults and nine children. They live in four collectively-owned houses that share backyards, gardens, chickens, and other resources. All adults in the community work half-time, to balance income and time to commit to the community. Excess is donated after financial resources are pooled to meet expenses. They choose to walk a razor’s edge between enough and holy precarity, balancing a spiritual life with sustenance.

The community is politically engaged, advocating for progressive causes, rejecting individualism and greed in solidarity with those on the receiving end of systemic injustice. Internal conflicts are resolved through weekly group meetings and there are weekly required communal meals with all members and friends of the community. The BCW practices “radical hospitality,” in which they invite people facing homelessness to live as guests in spare bedrooms and converted attic spaces in their homes. Guests must actively address mental health and addiction issues to remain in the community.

III: I Grew Up and I Remember

I Grew Up and I Remember is a series of photographs taken in Mascoutah, Illinois, tracing multigenerational families in this small town. Mascoutah was the mean center of population for the 1970 Census.

Mascoutah is a small town in southern Illinois, southeast of St. Louis and close enough to have become a bedroom community with the growth of interstate highways in recent years. The local economy and school system are anchored by nearby Scott Air Force Base and the associated military spending. While the military servicemembers are short-term residents, many citizens of Mascoutah are multigenerational and able to trace their families back eight or more generations locally. My photographs document a number of these families and their traditions, thinking about the impact and duties of family legacies. I also chronicle local traditions and histories, as manifest in small town civic engagement through municipal government, family-owned businesses, robust faith communities, and the hometown newspaper.

Empire is a series of photographs investigating the historical legacy of the Stone Belt and the Indiana Limestone Industry near Bloomington, Indiana. Bloomington was the mean center of population for the 1910 Census.

The Indiana limestone industry began developing between the towns of Bloomington and Bedford in 1827. This area of south-central Indiana contains the Salem Limestone Formation, an exceptionally deep belt of limestone approximately 10 miles wide, 90 feet deep, and 40 miles long. The stone is of exceptionally high quality, sought after for building materials and also for carving architectural details and sculpture. The Empire State Building, the Pentagon, Yankee Stadium, Ellis Island, and the Washington National Cathedral all incorporate Indiana limestone in the construction materials, along with 35 of the 50 state capitals.

Historically, the stone quarries and finishing facilities were one of the key employers in the area. The labor was initially done by hand and horse, pick and shovel. Steam tools changed the labor in the 1850’s through about 1918, when the machines were largely converted to electricity and made even more efficient. Employment levels dropped with technological innovation, and then dropped again in the 1930’s and then again in the 1970’s. Small quarries were bought up and consolidated by corporate interests, while changes in demand and additional automation made a leaner workforce.  The largest current quarry, Indiana Limestone Company, last went through bankruptcy in 2014 and reorganized with a workforce of 209 people, including management and marketing. They currently excavate about 2 million cubic feet of limestone a year.

Main Street Before Walmart is a series of photographs exploring the effect of overseas manufacturing and big box retail on the historic downtown and other industries in De Soto, Missouri. De Soto was the mean center of population for the 1980 Census.

De Soto, located southwest of Missouri, is a railroad hub and thrived on the railroad and manufacturing industries in the early days of the town. The biggest factory locally was the Peter Shoe Company, which despite several changes in ownership and names, continuously employed about 300 people beginning in 1908. The good wages from the railroad car repair facility and the shoe factory fueled a vibrant main street, filled with shops and commerce. The shoe factory began struggling in the 1950’s, closing briefly in 1958, and continuing to struggle in the decades following, closing and reopening under different owners and names. Overseas pressures closed the doors for good in January of 1994. The building was taken over by sheet metal manufacturing, then a corporate handset refurbishment plant, and then abandoned after a fire, with phones still piled and scattered throughout the building shell. Walmart opened a store in De Soto in 2004, pushing out local grocery operators by undercutting the prices that unionized grocery stores were able to offer and then driving down wages and benefits in the area. Today, Walmart, the railroad repair shop, and the School Districts are the largest local employers.

Like a Passing Shadow is a series of photographs exploring the tensions between historic preservation and commercial development in the village of Waterford, Virginia. Waterford was the mean center of population for the 1810 Census.

The fieldwork focuses on the small unincorporated village of Waterford, which is caught in a struggle to define itself, pushing between the opposing poles of historic preservation and commercial development. The center of the village maintains historic character, wrapped in a 18th century historic landmark designation, while the surrounding farms are slowly being sold to subdivisions. This tension in the town manifests in a number of ways, such as how the wells feeding the town are slowly growing dry, yet the majority of the residents are resisting putting in municipal water pipes for fear that it will encourage greater development.

My photographs examine the performance of historical narratives and civic identity, while empathizing with the residents and their struggle to define their village in the 21st century.

The most recent chapter, Appalachian Foothills is a series of photographs exploring the struggles of the working class and fights for environmental preservation in Hillsboro, Ohio. Hillsboro was the mean center of population for the 1870 Census.

My fieldwork in Hillsboro was interrupted by COVID-19 and I hope to resume my community partnerships when public health permits responsible travel.