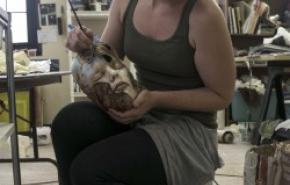 I’m interested in the similarity you can find in shape and texture across different parts of life. How the structure of rivers are like highways are like veins and root systems. Deteriorating walls can be a portrait of time and a record of human touch. One way these observations find form is through the investigation and combination of textures and surfaces. The work’s tactility is an important element. The viewer often wants to touch or hold the work. I think about the dynamic this creates between the... more
View Michelle's Resume

here, and where you are

“here, and where you are” is site responsive installation that deals with memory, its unstable nature, and the sense of longing that is often paired with it.

"here, and where you are" was installed in February of 2013 at Whitdel Arts in Detroit, MI.

A selection of works on paper from 2013

A selection of mixed media sculptural works from 2013

Palimpsestic Tendencies is a body of work that deals with repetition and transformation. The word palimpsest is defined as “a manuscript or piece of writing material on which the original writing has been effaced to make room for later writing but of which traces remain.” This aptly describes my artistic process. I often use old work as a starting point for something new. I am interested in creating multiple "life cycles" within a work that have the potential to reflect the temporality of our own lives. The original work that Palimpsestic Tendencies draws from is a sculpture that I installed in a Massachusetts state forest in 2010/2011. This project is titled Untitled (in the forest) and its duration was from mid-October of 2010 to early May of 2011. I returned to the sculpture frequently to document the changes it underwent. Two series of photographs came out of this project. One was pure documentation of the project and the other was a series of detail photographs taken with the intention of being separate works that would stand apart from the original. Palimpsestic Tendencies showcases those images and uses them as a starting point for other two-dimensional works.

"Untitled Cycle" is a visualization of the underlying fear of the failure of the body. It is an exploration of tension between the beautiful and the grotesque, health and sickness. As the viewer experiences the piece from different sides the line between these divides blur and dip towards one side or the other- flowing and shifting between different states and cycles of life.

Present in "One Hundred Suspended Wishes" is a sense of suspense; both of waiting for an outcome and the literal suspension of dreams and aspirations deemed impractical in the face of a harsher reality. The title alludes to the poem “A Dream Deferred” by Langston Hughes. The sculpture fluctuates between a sense of exploding into new life and rotting on the vine. Their shape is evocative of a chrysalis; either gathering strength on the way to metamorphosis or they sag and “fester like a sore”.

Our Life and Its Forgetting

"Our Life and Its Forgetting" is a mixed media sculptural installation that opened in November of 2014 at School 33 Art Center in Baltimore. It contains sculptures: "Vestige 1, Vestige 2, and One Hundred Suspended Wishes" and mixed media prints: "Untitled Mnemonic Numbers 1-3".

Present in "One Hundred Suspended Wishes" is a sense of suspense; both of waiting for an outcome and the literal suspension of dreams and aspirations deemed impractical in the face of a harsher reality. The title alludes to the poem “A Dream Deferred” by Langston Hughes. The sculpture fluctuates between a sense of exploding into new life and rotting on the vine. Their shape is evocative of a chrysalis; either gathering strength on the way to metamorphosis or they sag and “fester like a sore”.

Similarly "Vestige 1 and 2" flow and shift between opposing ideas and states. The process of death, decay, and regrowth is evoked while paralleling the mental equivalent played out in the process of memory and overcoming loss and trauma. These sculptures utilize the movement of the viewer’s body as they walk around- imposing an awareness of the viewer’s own body in relation to the sculpture. The perception changes from different distances and angles, unfolding a kind of narrative as the viewer moves around and takes them in.

Works on the wall.

A selection of works (both 2D and 3D) that are hung on the wall.

The “Untitled Mnemonic” series is very much about memory- how we remember, which memories rise to the surface, and how they fade and change over time. I have been thinking a lot about how whenever you recall a memory it gets a little less sharp and accurate each time, so that our cherished memories that we cling to become less and less in focus the more we visit them. And as the title implies, I’m also thinking about things that trigger certain memories. While making these pieces I was thinking about them as a sort of memory-scape. The process involved making many thin translucent matte-media transfers and collaging them using an etching press. I used layers of screen-printed shapes transparent papers, and drawing to obscure details and emphasize others. Process is an important part of my work, and I think the process behind this series also speaks to its content.

Neither Mine Nor Yours

Contemplation of time and mortality is not new in my work, but in Neither Mine Nor Yours there is a more inward approach. This series of sculptures uses the form of the self-portrait to investigate identity and my place in a world where the future seems more uncertain than ever. The uncertainty ever-present in life has been a driving force behind my work. The effect of time on nature, with its cycles of growth, death, and decay have been recurring themes in my work as well.

In this body of work the effect of humans on nature is beginning to be investigated. Just as the contemplation of time and mortality has turned inward in this body of work, so has my exploration of nature. In Neither Mine Nor Yours , the effect of the human footprint on the environment is also investigated. The paradox of “man’s destruction of the environment, he needs to survive” rises to the forefront. And with that there is an overarching sense of fragility- both of the body and of the world around us.