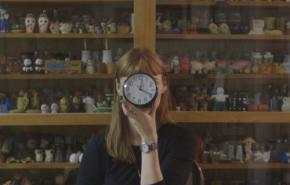 ​Chasm (2020, 2:00 loop, silent) 3D scans transferred to 16mm film. Chasm is a short film loop of imagery depicting love manifesting out of total darkness and the magical and divine state love creates and how necessary it is for survival. Ultimately it's about hope, and a reminder that love is there, in the world and inside ourselves. I 3D scanned my body and my partner's body, animated them, and then transferred to 16mm film. Site Specific Installation for Mono No Aware's outdoor Open Air Screening Series, October 2020. The OPEN AIR SCREENING SERIES allows for 16mm film projection viewing with social and physical distance guidelines in place. 16mm film prints are projected, on loop, from dusk until dawn.

"Any object, intensely regarded, may be a gate of access to the incorruptible eon of the gods." -James Joyce

That One Film Festival, September 2020

This video was directly inspired by Ami’s interest in South Asian and Middle Eastern folktales, specifically the tragic romance Sohni Mahiwal which tells the tale of forbidden love outside the rules of the caste system which ends in the lovers' deaths.

Using footage Ami shot on her travels to India and 18th century paintings of the tragic romance Sohni Mahiwal, the video mimics Ami’s process of making music, combining traditional methods with modern digital electronic methods, by using the grey & white “transparency” grid as a sort of digital liminal space—a space from which all creation begins—to allow further rumination and where the images from the paintings are transformed and reconstituted into a vast digital landscape to create a new vision.

In this new vision, the lovers do not perish in the choppy waters, instead they are happily reunited above the waters, depicted here in the late 18th century painting “Embracing Lovers with Sparklers” which shows a loving couple during Diwali, the Hindu Festival of Lights, which celebrates the triumph of light over darkness.

Building a film about building a fortress. The journey is more important than the destination.
Sections of the film were blocked off during the hand development process to keep parts of the film negative.

The Song of Creation

An exercise in pattern and sound. Inspired by film pioneers Oskar Fischinger and Norman McLaren's early experiments of drawing directly on film to produce music.

Here, I take a more modern approach, using an office printer to create a lexicon of different patterns and tones. The patterns are printed directly onto the 16mm film, the printer's unique errors give the film a gritty and degraded quality.

As the film is projected, these patterns begin to animate and also produce the sound heard. This is because the patterns are printed on the entirety of the filmstrip, including the last 2mm, which is usually reserved for the optical soundtrack. My process evolved as I learned this new language, first creating patterns to see what kind of sounds they would make, then beginning to make patterns based on the anticipated sound.

An exercise in identity, the video consists of a series of jittery 3D animated GIF portraits of a small part of the Baltimore arts scene. The 63 person cast is made up of Dan's friends, peers, and collaborators, all active artists. Each person was photographed with objects they deemed special to them- from the deeply sentimental to the highly frivolous. A 2013 time capsule.

The interactive feature lets viewers participate through the use of a smartphone app that syncs the phone to the music video and results in two simultaneous playing videos. The video on the smartphone displays a more detailed view of the objects of the cast members in the music video. The object rotates 360 degrees in either direction, depending on which way the viewer tilts their phone.

The Shapes Between Us: Live Visuals for Audience Interaction

The Shapes Between Us: Live Visuals for Audience Interaction (2016)
Projections for musician Dan Deacon.

Overhead projectors and a multitude of materials were supplied to be used at the audiences' discretion to illustrate and respond to Dan Deacon’s layered and hyperactive music. These materials included colorful shapes and vibrating moire patterns, and little instruction was given on how audience members should interact with the materials which gave them freedom to experiment. The piece allows passive audience members the opportunity to become active participants in the performance.

The piece was performed in two different incantations, first at Fields Festival with 3 chosen audience members, and later at London’s Roundhouse with the entire audience as the creators. Roundhouse has a 360 degree floor-to-ceiling screen made up of “5,600 silicon rods suspended from an 18 meter diameter ring, and provides a canvas for films, live performance, and audience interaction.”

Blue Things (2017)
A series of cyanotype prints of blue objects.

Cyanotype is a photographic process that produces a rich cyan-blue tinted image, and was first developed in 1842 as a means to reproduce notes and diagrams (think architectural blueprints), and later made famous by Anna Atkins to document plant specimens.

While experimenting with this process, I began to think about what objects were blue and why. Starting with compositions of organic or traditional blue objects: blue flowers, ancient blue ceramics from China, etc., I increasingly came across artificial items that are produced in a rich blue hue: tarps, gloves, moving blankets, tape, recycling bins, dumpsters. Most of the images I used were sourced from industrial supply catalogs, photographed in a plain and austere manner.

I began to think about the cultural use of the word blue as well- used to denote feelings of sadness, or vulgarity, or even the heavens.

Blue:
1. mod. depressed; melancholy. That music always makes me blue.
2. mod. obscene; vulgar; dirty. Those blue jokes don’t go over very well around here.
3. n. the sky; the heavens. The idea came to me right out of the blue.