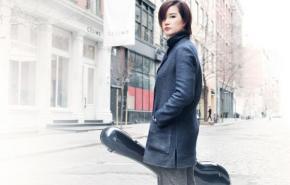 Multifaceted guitarist Meng Su is captivating audiences around the world with her stunning virtuosity and refined artistry. New York Concert Review called her performance “seemingly effortless and stunningly polished…. Add to that a beautiful – and fashionable! – stage presence, and she is poised to be in high demand” while Classical Guitar Magazine wrote that “she has already reached the status of a seasoned artist.” In addition to her busy solo career, Meng Su is an avid chamber musician who... more
See 2022 $10,000 Mary Sawyers Baker Prize Winning Portfolio
See 2021 $2,500 Baker Artist Award Winning Portfolio
View Meng's Resume

Acclaimed classical guitarist Meng Su is in her first year of teaching at SFCM.

She has been called a guitarist with an ability and artistry that far exceeds her years. New SFCM instructor Meng Su shares her inspiration and what she wants for women in music.

Swiss watch brand ENICAR, which dates back to 1854 and has been linked to motor sports like Formula One, soccer player Pelé, as well as diving, tennis, cycling, and boxing athletes, is endorsing TonarMusic artist Meng Su, Classical Guitarist.

On January 29, 2018, Meng will be presented the award of Outstanding Recent Graduate from the Johns Hopkins University, after a concert at the Beijing American Center of the U.S. Embassy.

The Outstanding Recent Graduate Award intended to honor recent graduates of Johns Hopkins (within 10 years of graduation) for outstanding achievement or service in his or her professional or volunteer life.

From the award announcement:
Meng Su is an outstanding talent who is “living the dream” of every musician. This past fall, she performed a solo debut in New York and was featured in the Baltimore Sun as one of the 10 Up-and-Comers Whose Name You Should Know. Meng is the first guitarist to have won both youth and the main Parkening Competition as well as the first female guitarist to make it to the final round of the main competition and win the gold medal. Meng has performed all around the world and has collaborated with various orchestras such as the Baltimore Symphony Orchestra, the Guang Zhou Symphony Orchestra and the Mid-Atlantic Symphony. Meng’s performances and recordings have impressed the public with an ability and artistry that exceeds her years. She is a role model for many at Peabody.

A week prior to that, Meng will play the beloved Concierto de Aranjuez by Joaquin Rodrigo with the Mulhouse Symphony Orchestra in Mulhouse, France, conducted by Michel Tabachnik.

In summer of 2017, Meng Su toured Europe with her duo partner Yameng Wang, and their mentor Maestro Manuel Barrueco. The guitar trio performed their program "China West" in Germany, Portugal and Spain.

The piece is a three-movement work for two guitars inspired by the colorful folk paintings from the town of Yangliuqing in Tianjin, China.

The Beijing Duo performed the world-premiere of this work in Austin, as a part of Austin Classical Guitar Society's International Series at AISD Performing Center in Austin, Texas on April 29, 2017.

From ClevelandClassical.com: Link
From The Baltimore Sun:

This disc makes a sterling calling card for Meng Su, the Chinese-born classical guitarist who came to Baltimore to study with the eminent Manuel Barrueco at the Peabody Conservatory. Su's command of the instrument is everywhere apparent, whether charging into the bravura moments of a sonata by Mario Castelnuovo-Tedesco or exploring the subtleties of William Walton's Five Bagatelles.

A recording like this makes me want to gather Florestan, Eusebuis, and Master Raro, and just say “Hats off, gentlemen, a genius.” Anyone who follows my reviews knows that I am excited about the level of artistry of many emerging guitarists. Surely, I get plenty of discs not ready for the national stage and even decline to review many that would just get a panning. But nearly every issue I find someone who really merits praise. Meng Su stands out among those as one of the very best.

First, the program is amazing—three huge masterworks, each of which would be enough to supply weight to the program; and each is performed beautifully, as fine as any, despite the heavy competition. What make her playing so special is her control of sound—every note is important, every sound is shaped with love and exquisite taste. It’s not just her tone—it’s also her dynamics, articulation, the transparency or density of the sound, the attention to the functions of multiple voices.

I’ve heard the Castelnuovo-Tedesco in a dozen or more performances, and I’ve played and taught the Bach and the Walton. Meng Su made each seem like I was hearing them for the first time—and that the music was inexpressively beautiful. There is virtuosity, but never for its own sake. These are not the fastest performances of the works you’ll hear, but they are among the most beautiful. She even throws in a couple of Tarrega’s salon pieces, but treats them like great music. Listen to her breathless beginning of the tacky little ‘Gran Vals’, a subtle crescendo sung like a simple but exquisite Schubert song, and you’ll realize that the piece isn’t tacky at all.

The performance is bracketed by works by John Williams—the film score composer, not the guitarist. ‘Avener’s Theme’ is a touching melody arranged from the score to the film Munich, lovingly played. ‘Rounds’ is his first work for solo guitar, first recorded by Pablo Villegas (N/D 2015 in Collections)—it’s a dark work, but it’s beautiful and moving, and Su performs it even better than Villegas.

Meng Su is from Quingdao, China, and has performed with Yameng Wang as the Beijing Guitar Duo since 2009, earning rave reviews. In 2013 the duo joined the venerable Manuel Barrueco (their teacher at Peabody) and have performed as a trio—see China West reviewed above. She only launched her solo career in 2015 after winning the Christopher Parkening Competition. But in any combination she is a sublime artist, and I wish her well in what will surely be a great career.

Meng made her New York Debut Solo Recital at the Symphony Space on September 23, 2016.  The concert received a wonderful review from New York Concert Review.

From the Press Release:

[For immediate release] The brilliant guitarist Meng Su will appear in concert on Friday, September 23, 2016, at 7:30 p.m., in the Leonard Nimoy Thalia at Symphony Space in New York. Ms. Su will perform J. S. Bach’s Lute Suite No. 4 and Mario Castelnuovo-Tedesco’s Sonata “Omaggio a Boccherini,” as well as works by William Walton, Sérgio Assad, and legendary film composer John Williams. The concert is the first in the 2016-2017 International Artist Series presented by the New York City Classical Guitar Society.

Meng Su is the first guitarist to have won both youth and the main Parkening Competition, she is also the first female guitarist to both make it to the final round of the main competition and win the Gold Medal.