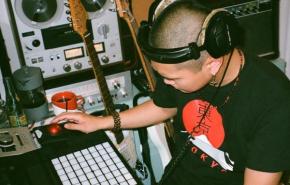 Music artist, composer, music producer, and audio engineer, Mark Kent Navarro utilizes his musical arsenal to create worlds.  Exercising his background knowledge and experience in rock, jazz, experimental, classical, bossa-nova, hip-hop, R&B, math-rock, post-rock, ambient and electronic music; he takes thought, time and effort to hone-in on, not just the details in a body of work, but also its intentions. Mark is a Filipino born and raised in Baltimore City, Maryland. In his early... more
View Mark's Resume

Flipbook is a solo ambient EP project I had written in 2020. It was written after my band had disbanded as a self-reflection piece.

In 2020, I was living in a 4 bedroom house in Baltimore City.  The rent was very cheap and I took advantage of the living situation at the time. My roommates and I's goal was to keep the house as strictly an artist house. I wanted artists to benefit from the cheap rent so that they may be able to afford more towards their art. We named this house, 'The Grindon," and for 7 years I lived in that house from 2015 to 2022.

We had weekly open jam sessions, organized artist events, house shows, and local artist community meetings on the first floor. In the second floor, I had put a recording studio setup in my bedroom where I started engineering in my room for myself and other artists. Those days I felt really good helping local artists begin to achieve their dreams.

This short EP was written during those years. I wanted to capture the feeling I had while being in that house in 3 songs. All while practicing very intentional writing. A lot of my mindset while writing this music was writing simply what I felt the music needed and nothing more. If something felt too much, I would cut it out. The goal was to say the most with the fewest needed movement.

G.O.L.D is based in Baltimore, MD and consists of producer Mark Kent Navarro (Baatchoy) and vocalist Dyyo.

G.O.L.D is an independent alternative R&B duo whose music encapsulates the feelings of finding love, losing love, and all the emotions in between.

They released their debut EP, "START AGAIN" in 2021 and are releasing their debut LP, "LIGHT MY FIRE" sometime in 2023.

"For Ben, It's Been..."  is an EP project I had written after the passing of my grandfather. At the time, it was my way of coping with his passing. The title 'Six Years to Ninety' is in reference to a note he had written to himself stating he had 6 more years to make it to 90 years old. A goal he wanted to make that unfortunately did not come true. In his last years he suffered from dementia.

These three songs were written with him in meditation. Each encapsulating a part of how I saw and remembered him. He was a man who kept to himself; who would reminiscence on his youth in riding motorcycles back in the Philippines. He was a man who took care of his family the best he could while being a father figure to many. He enjoyed watching sports, eating good food, spending his day at Pimlico betting on horses. He loved to the simple pleasures in life.

Yugennui is a Post-Rock ,Math-Rock band formed sometime  in 2013.

My first band project starting with friends. The cataylst to my music journey that I will always give credit to. As the guitar player I formed my first own sense of identity through the music of this band.  Using very dramatic motifs and weaving between rapid odd time signatures. This band was, at the time, my friends and I way of being punks. We all are inspired at the time by bands such as: The Mars Volta, Tera Melos, and Godspeed You! Black Emperor. I would say we did our best trying to be all 3 of these bands at the same time. For our first times making music seriously, we were proud.

We toured the independent D.I.Y. circuit along the United States East Coast 3 separate times traveling up as far as Montreal, Canada. During our tours we have played in cities in New York,  New Jersey, Pennsylvania, Ohio, Virginia,  Vermont, Massachusetts, and Michigan.

Yugen -  the beauty that we can feel sense into an object, even though the beauty doesn't exist in the literal sense of the word and cannot be seen directly

Ennui -a feeling of listlessness and dissatisfaction arising from a lack of occupation or excitement.