Mark Jurus  1990 Graduate from Maryland Institute College of Art - MICA. With a BFA - Visual Communication Graphic Design. Mark has been working with stone since 2007 and started his certification process in 2009. Currently dual certified both with Dry Stone Conservancy (​DSC)​ US Level 2 Journeyman and Dry Stone Walling Association (DSWA) ​of Great Britain Level 3Advanced. Mark holds the highest certification in surrounding states. In... more

Sept 2018 - June 2019
2019 March, Myersville Straw Bale home, 2 of 3 retaining walls 4 ft + including several large local boulders from the property. 1:6 batter wall, flat caps, stainless steel railing rods built into wall 3 courses down, all tie stones plumbed with electrical pipes for future Low Voltage Led lighting. Protruding foundation below grade. Small planter built 3' x 30" at end of wall by house for above vine trellis system. Dollar store pool noodles just for the fun of it. To protect the stainless steel all thread rods which the home builder will be installing 3' Locust logs for post from property. Stainless steel rods to be installed 4" spacing for code and to tie in with upper vine trellis system. 7 custom cut onsite - feather wedge faces curved steps 7" rise w/ 16" tread 30 stones cut to fit singles with some double stacked. Railing rods also installed. Wall built on steps. Boulders built out from home including bridging of 2 french drains and 1 out of wall lintel. Wall to be built behind this patio 5' tall for upper patio to back door as seen on background.

11/2017 - 4/2018 Monkton Maryland, This project was Built for Nick Balducci who owns 2 Bluestone Quarries in NY. This Backyard makeover highlight all his stone except the granite cobbles and aggregated. Patio, Walkway, Seating walls, Fire pit area.

Upperco MD - Gorsuch Mill Road and Falls Road Historic 1870 home. New - Old winding curve retaining wall 3' H by 110’ L.  WindingWith all local stone from the site. Repurposed barn foundation along with existing walls and stone dug out during excavating. 32 tie stones, 1:6 batter, below grade protruding foundation 3’ W, 4 rebuilt step stiles only second step was replaced due to damage set in the same exact order moved closer to walk out the back door. Capstones 21” L wall built from old wall sections believed to be dated 1947 - Failed due to single sided - long faces (tracer) from step stiles left all old wall from about 10 ft to right of step stiles all new construction. All stone from on site, repurposed barn foundation, stone dug out from excavating, and original walls. Estimated 46 tons of stone. Dominantly a flat bedded schist stone.

PA Blue stone fire pit inspired by Dan Snow found in his book "LISTENING TO STONE". This stone fire pit was built as a X-mas gift for my mother. Took me 78 hours, 2 pallets of PA Blue stone. Measures out to 7 1/2 feet x 2 feet at arch. Many hours have been spent with family and friends enjoying the warmth of Fire.

2019 Fall, Dry Laid Stone Granite Retaining Wall 2'/3' High - 75' Long.
Historica walls believe to pre date 1920's most likely build in the late 1800's. All granite stone from walking distance. Two quarries in the Historic Ellicott City area. Quarry #1 was in Baltimore County where High's  convenience store currently sites. This quarry was clearly open later and from evidence of newer construction in the town. Evident in this wall which had the blue/black speckled stone clearly added later to sections of the top beginning and end of wall. The #2  quarry was down the railroad tracks across the river from the Baltimore Co. quarry. This quarry was clearly open the earliest due to many of the oldest builds and structures are built with the pinkish granite.

The wall had to be Rebuild due to vehicle damage, improper methods of walling and elements of  mother nature. The wall ranges from 2'-3' and has be rebuilt with 3 types of granite the blue, pink and a black which is also native to the area. The black granite is the hardest of the 3 but clearly not necessarily a granite since it does have fault lines. The pink beining the softest. This black stone can be found from Ellicott city all the way north to White Marsh Maryland and possibly Havre De Grace. Much of the back walls were built with the black stones many of the shapes to resemble a quarried rip rap. The wall also has been moved back up to 6' off the white line to help vehicle traffic safely make the tight turn. In addition the wall has a new added batter since many of the walls had been built vertical due to the nature of  splitting the stones with a method called feather and wedging. This method became very popular across the US in the 1800's for quarries splitting granite. The wall also now has an additional added foundation with a hard sandstone from Scranton PA. Lastly to the updated design was been tie stones mixed in at any of the upper levels when possible to help strength the wall as a unit. Many of these tie stones are repurposed granite tombstones ranging up to 30" long.

The first section of wall to be rebuilt was a total length of 75' . With an additional 78' currently undergoing historical approval regarding additional tree removal to continue. Historic Ellicott City is full of dry laid stone walls many of which the same size and patterns. Others a bit different. I'm the first to help Howard county identify there construction and assist them with understanding how to rebuild them when and if they fail in the future. This is truly and honor as a single owner and operator to honor those who put some much of there hard work into quarrying this stones and the masons who then shaped and set them in place. Currently there is no documentation or records at this time know. My hopes are with the Historical Society and the commision we may find ways to help identify more of their origin and history to document them for others to come. ​​ 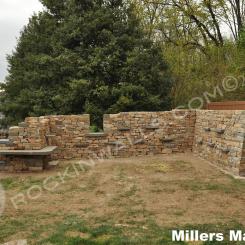