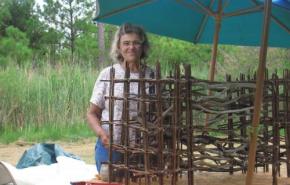 Marcia Wolfson Ray was born in Baltimore, Maryland. She received her BFA from the Maryland Institute College of Art. In 1993 she received a fellowship to attend the Mount Royal  Graduate School at the Maryland Institute College of Art where she earned her MFA. She taught art in the Baltimore City Public School System. While in graduate school she started using organic materials such as bamboo, phragmites, dog fennel, hibiscus, straw, marsh elder and pine wood to construct her sculptures.... more
See 2012 $1,000 b-grant Winning Portfolio
View marcia's Resume

"The map is not the territory." - Alfred Korzybski
The source of my art has always come from nature and the landscape. The changes and cycles nature goes through are part of my focus in making art.
These are my latest sculptures. They are constructed from pine wood and willow. The pine wood was collected from the marshes of the Eastern Shore of Maryland. In the winter the marsh is burned to promote new growth in the spring.
Burning allows for healthy growth and increases plant diversity. It increases wildlife habitat and promotes an environment for rare and threatened plant species. It also helps to control hazardous buildup of fuel. The controlled marsh fires are important to the conservation of birds and wildlife.
What attracts me to this wood is the visual record that remains. The twists and shapes that were produced when the tree was growing in the marsh. The black charring from the fire and the bleached quality produced by the sunlight as it lies on the ground act as a catalyst for ideas for the sculpture.
Collecting the materials enables me to be out in nature and this process directly contributes to my desire to make art.
I drill arbitrary holes in the pine wood and use the willow as dowels to construct a scaffolding which creates another visual element.
There is an aspect of randomness that has infiltrated my working process as my art evolves. I can not make sketches of  what the finished piece will look like because as I work the piece continually changes in unforseeable ways. Included in my primary influences are the visual presence of the wood I am working with and the effect of gravity, the physical act of having the piece stand.
The delicate balance in constructing the sculpture takes on a life of its own and helps determine the final visual effects. It is this unpredictability in the process that draws me in and keeps me working.
This process which begins when I am out in the landscape allows me an intimacy with the natural world which helps me feel connected to the very thing that makes my existence possible. My art is essentially about a process of transformation and an evolution of materials.
These are five of my latest pieces, with a couple views of each sculpture.

This series of sculptures represent a departure from my previous work ( in Section Four) in the fact that they are free standing and not wall hung. This evolution away from the wall led me to focus on the more three dimensional qualities of my materials and the more subtle use of space.
The sculptures are constructed from pine wood gathered from the marshes of the Eastern Shore of Maryland and willow. I had been working with these materials before but at this time I started to see the wood in more comprehensive way.
In the past I had used materials such as dog fennel, phragmites, and corn stalks. These materials all had qualities that drew me to them but one of the dominant traits of these materials was a lineariness that imposed a grid and symetrical design on my work. At this time I could think up ideas and draw them out and have a blueprint of my design for the contruction of the sculpture.
When I started to collect the wood from the marsh and work with it I had a realization. Some one (not a person involved in art) had seen pictures of my work and made the comment that all my art was symetrical. This was something I had not realized. I don't think I gave it anymore conscous thought but it had lodged in my brain. When I started using the pine wood and working free standing I let the different qualities of the wood manifest themselves. Losing some control over my process produced a certain randomness and organic quality. I was attracted to this new way of working which created in me an excitment I hadn't felt before. My process from that point on had changed.

This section is a series of drawings using a combination of water color and color pencils.
In 2020 I could not work on the sculpture because of knee surgery. While recuperating  I started drawing with some color pencils I had.
My focus for years had been on the sculpture. I had been teaching part-time in the Baltimore City public school system and this forced me to use my time in the most productive way I could manage. Between collecting my materials and actually constructing the sculptures it left me little time to explore other mediums. A combination of events occured which left me in a different place. Last year I left the school system and at the same time was limited on being able to work on sculpture. The result was I started to explore drawing.
My interst in the natural world also manefests itself  in reading about the world of quantum physics. This examination of the natural world on a subatomic level I think influences my art in the creation of the sculptures and the drawings.
I should say that my reading and understanding of physics is very limited. I aim to try to understand the basic concepts of what I read and to try to understand the role this might play in our natural world. While I don't think the drawings can be interpreted literally I feel  they  reflect  an aspect of this interst.
I have not worked with color in a long time and am trying to use this aspect to express space and form. Again not in a literal way. Working  three-dimensionally space and form are manifested very concretely. While working two-dimenisonally space and form become elusive.
My struggle to express this world in a new medium (for me) is a challenge. The initial urge to express and communicate is what every artist  is dealing with and  while the end product reveals to what extent the artist is successful I believe it is the journey that's the primary goal.

These are wall hung sculptures. The latest is from 2016 and proceeds back in time. At this time I had started using pine wood that I had collected but these pieces still included a variety of materials.
Some of the materials for these works include pine wood, dog fennel, marsh elder, hibiscus, willow and crepe myrtle. Most of the materials I collected myself. Sometimes someone may trim a tree and give me the remnants.
At this point in time my ideas are starting to expand but there is a basic underlying grid still  applied to theses works.
I think this is the beginning of an evolution in my art that starts with the materials and continues into the forms.
Nature and the environment play a key role in my work. I am not trying to imitate or produce a literal interpretation of what I see.
My goal is  more in line with a synthesis of my experience out in nature and its effect on me. I do most of the collecting myself and many of the sculptures are constructed atleast partially outdoors. The time I spend outdoors is a key influence on my work.
Because the inspiration for the sculptures comes from nature the time I spend out in the environment is the equivalent to time spent in the studio. The process is ongoing whether I am collecting or actually constructing a sculpture.

These works are from 2015 and before. The sculptures were created from material I gather from the fields and marshes mainly on the Eastern Shore of Maryland. They include pine wood, dog fennel, honeysuckle vines ( and other vines), marsh elder, phragmites, corn stalks and joe pye weed.
The materials and the form they take are strongly influenced by the environment they originate from. The variety of materials sparks my imagination and contributes to the final visual effect..
Also included in this group are three installations that were included in the Outdoor Sculptural In vitational- Artist in Dialogue With the Landscape. These exhibits took pace at the Adkins Arboretum in Rdgely, Maryland in the years 2014, 2016 and 2018,

These are a variety of sculptures from 2015 and before.
They are a combination of free standing and wall hung sculptures.
Some of the plants used are honeysuckle vines, hibiscus, sweet clover, corn stalks, hosta leaves, flower stems, pine bark and dog fennel.
In using a variety of natural materials I am trying to explore all the visual qualities that are present in them.
When I collect these difffernt materials I let them sit for a period of time in my studio. I find out how well they last over this time. Some materials deteriorate and I cannot use them. Some materials petrify and gain a certain strength. These are the materials I wind up working with. I do coat the pieces with a combination  of paper mache and glue to seal them.This has no effect visually on the piece but does add a strength to the surface.  While they may have a fragile appearance the pieces do withstand a certain degree of abuse that is inevitable in the process of exhibiting them.

These are a collection of free standing and wall hung works.
Some of the materials they were constructed from include sun flowers, hibiscus, straw, corn stalks, bamboo leaves, Joe Pye weed,, groundsel, dog fennel and phragmites.

Thee are earlier works. My travels take me to many locations around Maryland but I am increasingly collecting more of my materials from the fields and marshes of the Eastern Shore.

My love of nature led me to collect a variety of plants for my sculptures which acted as a catalyst for my ideas. 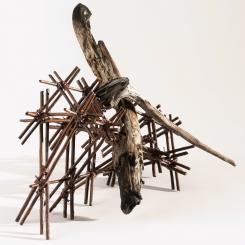 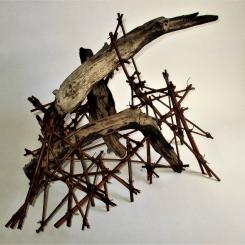