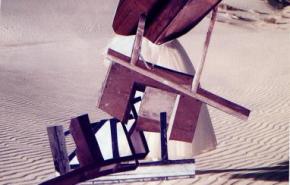 Magnolia Laurie was born in Massachusetts and raised in Puerto Rico. She received her BA in Critical Social Thought from Mount Holyoke College and her MFA from the Mount Royal School of Art at the Maryland Institute College of Art.  She has been awarded fellowships and residencies from the Vermont Studio Center, the Virginia Center for the Creative Arts, the Creative Alliance in Baltimore, and the Jentel Foundation in Wyoming. She has also been a recipient of an Individual Artist Grant from the... more
View Magnolia's Resume

Again and Again refers to the repeated cycles happening all around us, from tectonic shift and volcanic activity to the devastating forest fires and the slow new growth that follows. In one sense, the phrase implies a form of persistence or survival. In another, the repetition can articulate a failure to change course.

This new work started from a very physical inclination, a need for the relationship between the materials to be reactive, immediate, and tactile. In this way, the images emerged from a sort of rummaging in dark inky terrain and feeling my way through. I can hold a rock in my hand and hold both a place and a moment in time. I wanted these drawings to feel that way – for the paper to soak up a pigment, an action and a fraction of time, and hold it.

The drawings suggest a geologic span of time and offer a nearly cross-sectional view of landscape – tendencies that complicate a sense of vantage point and question the expectation of a human perspective. References to the sublime, geologic stratification, and global climate change collide in fractured imaginary landscapes. The drawings evolve through a process of adaptation, as each layer of ink, water, and salt add and subtract moisture from the surface. Visual layers repeatedly build up and break down, offering evidence of both immediate and gradual change.

Clusters of wood and plaster branches accompanied the drawings, stacking and leaning throughout the exhibition space. They provided a physical counterweight to the imagined spaces in the drawings.

the wanderer is not a walker of shapes or outlines,
and his vision unfolds at ground level, as he goes along
Tim Ingold, The Life of Lines, Routledge

The works in further yet closer still are honest in their wandering, each painting marking an encounter with information that I needed to process and translate in order to better understand. Some paintings stay closer to their references, while others are allowed to detour into augmentation and embellishment. The colors in these works range from emotional saturation to restrained precision and starkness.

Borders, fences, and framing devices are repeated motifs in these new paintings, they denote division, proximity, and distance. There is no doubt that we are living in a time of division and very tangible transition. These works are about looking and thinking, bearing witness to environmental and cultural rifts, while trying to move forward.

further yet closer still can refer to the act of wandering, which is also likened to the process of making, when you sometimes need to lose yourself in order to find what you are looking for. The phrase also seems apt to describe the somewhat conflicted state of our social and political environment - from which we will hopefully find our direction forward.

The work in GROUND SHIFT was made in response to my recent time in Iceland. The title nods to the act of traveling and literally shifting ground, altering one’s place in the world and thus one’s view. Iceland feels like a ground in perpetual motion and transition; impacted by eruptions, tectonic plate shift, glacial melt, and constant weather change. In Iceland I felt both awe and inconsequentially vulnerable to the whim of, not simply the land, but the whole spinning earth. I stood completely blinded by dense fog, touched rocks that rose up from under the earths crust, stared off through vast barren lava fields, and humbly climbed atop a glacier as it melted beneath my feet. Distinct from my past work, these paintings bear fewer direct references to the manmade and settle the gaze on the idea of the landscape itself. In this way, GROUND SHIFT also refers to a change in scale and focus within the work - a shift towards glacier time, tectonic movement, and geological formation.

Here and Now Paintings
These recent paintings place the viewer inside looking out. We are near but isolated from the landscape outside. Snowstorms and dense fog, stark desert heat, and barren forest are set in contrast to the calm of the contained and domesticated nature we create with houseplants. The unpredictable outside is distanced by the slight framing device of a windowsill, a partially drawn shade, or the foreground intrusion of a houseplant. Created throughout the height of the 2016 presidential election, the paintings were a way for me to address the idea of vantage point. Compositionally they place you in front of a view and invite you to look out into the distance, but hold your attention in the foreground. They are intimate paintings revealing personal worlds, isolated bubbles, contradicting realities and a tension between the near and far.

Some paintings are hung on the walls while others occupy custom-made wooden structures that hover between sculpture and furniture. Mounted on structures, the paintings stand in the space with the viewer. Included with these structures were a number of collected objects: rocks, worn bricks, mirrors, and potted plants. Through placement and composition, these different objects create an installation that echoes the ideas of vantage point and personal views found in the paintings. It also invites the viewer to move through space and encounter the paintings and objects from a number of different views, creating an opportunity for discovery and new perspectives.

This body of work draws from history and current events, recomposing mountain top removal explosions, aerial views of flooded communities, and the billowing plumes of oil train derailments. These are events that impact us all in some way or another, but our opinions and views are shaped by our proximity, our needs, our costs and our benefits. I wanted to address parallax views and multiple vantage points within the work as a way to suggest the complexity of our relationships to the land we occupy and utilize. I created dual panel paintings that explore a range of diptych formats to focus on the idea of vantage point and the spacial experience of looking from here to there.

Just as vantage point impacts our opinions, physicality impacts our attention. We relate to information presented in a two-dimensional space differently than we do to that in three-dimensional space, things that occupy our space command our attention. To recognize that fact, some paintings are shown on the walls while others occupy custom-made wooden structures. These structures bring the paintings off of the wall and into an awkwardly active and insistent space that wanders in a non-committal manner between sculpture, picket-sign, billboard, and furniture.

This work was featured in the Baltimore Museum of Art as part of the 2015 Sondheim Prize Finalist Exhibition.

This body of work started in the summer of 2013 at the Jentel Artist Residency. Driving from Baltimore to Wyoming, I spent many hours looking at the landscape moving by and thinking about its history and transformation in the time that people have claimed ownership of it. Heading west, there is a sense of an ever increasing scale – it’s hard not to feel somewhat romantic and nostalgic about it –even if it is marked by billboards, signs, old oil drilling rigs, scorched hillsides, and miles of fences claiming ownership of it all.

As a body, these new paintings have a sense of conflated meaning. They imply the sublime and the history of landscape painting, while acknowledging the melancholic cycles of infrastructure and decay. Parallel to these ideas, I wanted to explore the more consumer oriented act of travel photography and tourism. In these conditions, what would be considered a landmark? l was interested in this term for the duality of its meaning as both a marker as well as a destination or place – it can indicate both where we are or where we want to go. It can be a point of reference in space but also an event or point in time, such as a turning point or a moment of discovery. In this context I could draw connections between the personal and the societal, the past and the present, the functional and the futile. With current political issues over water and energy resources, as well as what has felt like increasing severe weather and steadily rising environmental concerns, I wanted to incorporate the conflicting visual vocabulary that marks the land we live on and utilize. These are also our landmarks, they mark our occupation and use of the land, they mark a location, they will mark a moment in time - perhaps a turning point.

Continuing with some of the ideas from What Could Hold Us Together, this work spans 2012-2013. The paintings reference images of natural and made made decay and destruction. At times, the pending threat is slow, an abandonment and neglect that is seemingly just as inescapable as an on oncoming tornado. In the work I was thinking about time and repetition. Events mark time, these are markers of a moment of transition, a change for better or worse.

what could hold us together

What Could Hold Us Together is a series of work created for a solo exhibition at frosch&portmann Gallery in NY.

Within the work I wanted to pose the question of what could hold us back from the brink of falling apart, as mounting political, social, and economic calamities seemed to perpetually threaten. I wanted What Could Hold Us Together to read both as a question to a hopeless answer, as well as a resilient statement of hope and assurance of what will persist and endure and maintain. The title of the exhibition comes from a line in Virginia Woolf’s To the Lighthouse. In 2012 I found myself rereading the novel along with Herman Melville’s Moby-Dick and John Steinbeck’s America and Americans. These narratives of precarious transition with wandering narrators informed the visual language and psychology of the environments in the paintings. Within the paintings I tried to balance domesticity with survival, the falsity of facade and the reality of barriers, and the hopeful with the hopeless.

In Holding Up I wanted to explore the repeating task of enduring weight. This series references accumulative structures such as bird nests, entwined debris and residual heaps that remain after a storm. Within the series, delicate structures change and adapt, as do the weights or pressures. And in the end, the series is about endurance and survival, making-do and adapting.

all after all before

All after All before is taken from AA...AB, the Morse code for repeating a message. Often used to highlight or draw attention to a part of the message, it is a signal to request communication from whoever can receive it. The paintings in this series drew on a sense of pending ruin or disaster. Flags, barriers, markers and warning tape signal the somewhat urgent and awkward call for help.