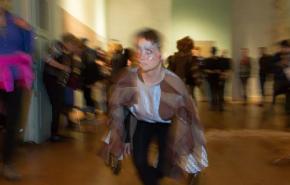 Lynne Parks was born and raised in Northern Virginia. She has been a resident of Baltimore, MD since 2003. She has a BA from Hollins University with an independent major in creative writing/theater/film studies. She is the Outreach Coordinator for Lights Out Baltimore, a bird conservation and wildlife rescue organization. She is a practicing visual artist, curator, writer, and performer.
See 2013 $25,000 Mary Sawyers Baker Prize Winning Portfolio
See 2011 $1,000 b-grant Winning Portfolio
View Lynne's Resume

I focused on writing in 2018, including essays, monologues, and short fiction. I attended the Kenyon Writer's Workshop and was published in The Dalhousie Review.  I'm currently working on a book of essays and a play comprised of six monologues.

Missing Birds, Birdland and the Anthropocene

Birdland and the Anthropocene opened at The Peale Center in October of 2017 and ran for a month. It is an exhibit I curated and participated in as an artist. Missing Birds was my mixed media work that was included in the show. I also performed in an extinction ritual choreographed by Jess Rassp. Additionally, I hosted workshops with the Baltimore Lab School and Make Studio. The resulting work was included in the exhibit.

In 2009, I began volunteering with Lights Out Baltimore (LOB), a bird conservation/citizen science/wildlife rescue organization. LOB seeks to make Baltimore safe for migratory birds by encouraging downtown buildings to turn off nonessential lighting during migration. Volunteers monitor collisions in the city during the spring and fall collecting fatalities and logging strike data--date/location/species--as well as transporting injured birds to a wildlife rehabilitator.  The dead birds are donated to the Smithsonian Natural History Museum to be used for research or museum specimens.

Since 2010, I have taken photographs of several of the fatalities we've collected. I think of them as portraits honoring the loss of  individuals and this intention has been influenced by memorial photography.

As many as a billion birds are dying annually in the United States from building collisions.  Songbirds and shorebirds that migrate at night to avoid predators navigate by the moon and starlight, as well as the earth's magnetic field.
Disorienting light pollution, bright white and yellow light, attracts birds into urban environments where they encounter a maze of invisible barriers, glass.  Birds perceive the world differently than we do. Windows either show what appears to be a clear pathway or a reflective surface that looks real.  Only by breaking up large panes of glass with designs that follow a 2" horizontally or 4" vertically oriented rule, can we achieve bird-friendly glass.  It's generally the first thirty feet from the ground upward that is problematic.

In the past three years, I continued my study of birds and building collisions. I had solo art shows and curated art shows that addressed the bird/glass collision issue. I gave talks at campuses, galleries, a bird conservation conference, women's groups, and bird clubs. I realized I wanted to push forward with the project and find solutions.  I began incorporating bird-safe window film cut-outs in my shows. That led to invitations to treat windows at a national wildlife refuge visitor center, an elementary school, and a wildlife rehabilitation center.  A 4th grade Lego League team championed the cause and with my mentorship won a regional competition and is taking the project to state.  Here are some of the windows I treated as well as new window film designs.  The 2"x4" rule has been implemented. Birds will not fly in between spaces that are 2" or less horizontally oriented or 4" or less vertically oriented.

Also included here are some of the glass environments we find birds in during our monitoring of downtown Baltimore during spring and fall migration.

the boat that Skip built

Here on the top of a mountain in the Alleghenys sits a boat in a house.

Uncle Olin took us to see the boat. We hopped into his pickup for a slow, steep ride. At this altitude, the trees are thin, but thick with lichen. We startled a wild turkey and a pileated woodpecker. At a declivity a good ways up, we found a high meadow bisected by a stream. Beavers were busy here with lodges and dams. Yellow and chestnut-sided warblers and common yellowthroats sang. A willow flycatcher gave a spirited “fitz-bew” and a yellow-billed cuckoo said “cowp.” Here sat a two-story old farmhouse going to ruin. In the seventies, a “hippie feller” moved in, Skip. He was handy and inventive. Winters were harsh, but local folks took care of him. One day he decided to build a boat in the house. In the house. He made a lathe out of an old chain saw motor held in place by plaster, a bicycle, and other things. He started pulling wood off of the structures at hand including the pig barn. When it was finished, the boat was a thing of beauty. Joinery. No nails, but trenails or dowels. No one knows why he built the boat in the house. He was pulled over in Tennessee and shot when the police thought he was reaching for a gun. There the boat sits in the house, stumbled upon by abandoned house explorers and joy riders. Some inconsiderate soul had spray-painted it; others had stolen bits and pieces from it including the steering wheel. Someone had started pulling the wall out in an attempt to steal it, but there it sits as yet, heavy as hell.

We wind on down the mountain and stop at the general store in Blue Grass. We grab a couple of sandwiches and sit on the front porch. Herman Puffenbarger stops with us. He’s eating powdered sugar donuts. He knew Skip and tells us stories about him. Skip had bought a $3 used lawnmower and attached the motor to his bicycle. He traveled back and forth across the country on it. He traveled to Florida in ten days. He called Herman when he arrived, knowing he would be worried after that trouble in South Carolina. Skip was once arrested for not wearing a helmet and put in jail for a month since he couldn’t pay the fine.

Skip once rigged up a homemade sawmill, but no one else knew how to cut true with it.

On a mountain, an old house. Highland County, VA.

Taking the trusty 35 mm out for a walk near my house. I don't arrange the compositions, I find them. I find revelations in our remnants, our traces.

Textures and shapes found in alley trash piles and gutters. Expressive of the ways I feel bound, caught and trapped by my illness--chronic sarcoma and the many grafts that go with it.

These are images from walks I've taken through Baltimore's streets and alleys. I find compositions, I do not arrange them, except in the viewfinder of my camera.

"The term desmoid originates from the Greek word "desmos", meaning band or tendon-like and was first applied in the 1800s to describe tumors with a tendon-like consistency." These tumors bind the connective tissues. They knot into themselves and pull the body's structures out of alignment. They mutilate and sometimes they kill. My desmoid tumors have come out of remission. I think of how these tumors have marked my flesh. I think of the many tissue stains that have gone into verifying my diagnosis. I look at the cellular structure of the tumors. I find these forms in the environment around me.

For me, these images represent the new constraints my body is experiencing, the shape of the disease. Things unravel for us all at times and we patch together our lives as best we can.

I have long been fascinated by the multiple orientations afforded by wonder cabinets, and I have been much inspired by Kurt Schwitters' exquisitely composed refuse, Joseph Cornell's theatrical boxes and Louise Nevelson's assembled abstracts. I collect found objects and play with their reactability in the studio/laboratory, intrigued both by what they disclose and by the investigation of infinitesimal qualities, Duchamp's inframince.

As a child, I explored the unfamiliar and forgotten objects cluttered in my parents' drawers. Many afternoon hours were spent guessing at their practical usage, often as not imagining unlikely ones and imbuing them with life. The fountain pen nibs, defunct cigarette lighters, sewing machine parts and broken jewelry were my "plastic animals." My father's horological tools were especially evocative, later I was entranced with his beautiful landscape designs. I read mythology with my brother Bob and appropriated the notion of composite beasts.

Contained within my pieces are vessels and aberrant anatomies, seemingly disparate objects enthralled by shared qualities. Contrasting textures compliment or irritate, there are harmonies and tensions. The life of objects reflects our own desires, sensuality and procreation and also what might be tangled, corroded or broken within. Process and transformation are revealed in decay, there are revelries to be found in dust.