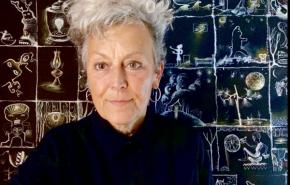 I was born in a small town in Alabama and grew up working in the family business, The Heart of Dixie Motel.  The Motel was set on a hill with miles of woods behind and HWY 280 in the front. The town lay in the valley below. The Tallapooosa River, just beyond the valley was dammed in 1920 to create electicity, which flooded many small towns and created a huge lake.  This lake covers my ancestors homes and graves.  Many of my images rise from here. I graduated from the small but fierce... more
View Liz's Resume

Crank Me Up, by Curving Tooth

Below, you will find a small sample of the yet to be released 2023 Curving Tooth album.  More to come in the Spring/Summer.

Greg “Lovey” Hatem and Emma Elizabeth Downing are two of Baltimore’s most generous and prolific musicians. In their new collaboration, Curving Tooth, their talents collide and whole new worlds form.
Setting Downing’s trademark banjo and high lonesome holler amidst Hatem’s synthesized landscapes, the duo’s new record Crank Me Up is by turns whimsical and haunting, sublime and carnivalesque. Here, everything on earth is imbued with life essence and omens abound: crows are oracles, bears ride the train, and goblins and heroes alike rise from the fertile decay.

Downing has been a staple of Baltimore’s art music underground since attaining college radio credibiltiy with her band Lambs Eat Ivy in the 1980s. An endlessly restless performer, she continues to record and perform in a variety of collaborations, including Old Songs (with Chris Mason of The Tinklers and Mark Jickling of Half Japanese), In the Womb of the Everywhere Room (with Allison Clendaniel of Mind on Fire), and Mole Suit Choir (with Rupert Wondowloski, shopkeeper at Baltimore’s legendary Normal’s Books and Records.)

Hatem’s resume is equally active, recording and performing his own solo music and with Baltimore bands — drumming with Natural Velvet, playing multiple instruments with Moth Broth, and joining Downing from time to time in Mole Suit Choir.

With Crank Me Up, Curving Tooth serves up a banquet of experimental pop that is both inviting and adventurous, combining flavors for every palate into a concoction that is quite toothsome indeed.
written by Rahne Alexander

Psycho dramas in shades of red

When I am working with gouache on a brush, using my elbow and shoulder in the motion , I conjure images from an emotional, psychological place. When drawing with a pencil, I use my wrist and bring about image making from an intellectual place.

In my sleeping dreams, the landscape is often shaded dark red .  Using deeply colored paper premakes the place, which is most of the work.  All I have to do is inhabit the red space with  marks and dots which come together as archetypes or places where the archetypes may crawl from.
After so long of using every color, I am happy to have reason to use predominately one color.  Working with one color gives all the power to that shade.  All dots and every mark has purpose.

Within the grids on black paper, with gouache, I  catalog the dream actions of childhood monsters who have continued to live into my adulthood.  These monsters are: The bear who got off the train and crushed a path through the pines to my family's living room, where we all sat. The goblin who lived under the slop sink, behind the mops and brooms. My dead grandfather's head, which appeared in the corner of the room, more opaque on anxious days. The girl with a Moon Head who followed me too closely.  The crusty drunk, being frighteningly unaware.

Tears will lift your boat, Tears will become the river that will take you somewhere. In this particular place you will see the Dagon Twins dancing to the Dirt song, and the soul boat being tossed on existential waves.

This sound piece, I created in May 2020 with collaborator, Allison Clendaniel.  The visual, I recorded alone on my iphone using hand held puppets moving to a sound track by Lurch and Holler, (Liz Downing, Michael Willis).  Allison Clendaniel and I added vocals and Allison created further sound layers with James Young on Oboe .
Full credits are at the end of the piece.

Moon tells us as directed by Dr. Clarissa Pinkola Estes, "Tears will take you somewhere.  Tears will become a river and lift your boat off the dry rocks on the psyche's shore."
Dogon Fish God Man Twins dance to the music of the Seed, with these words:
Plant a tree
Grow sappling tall
Fell the tree
Build a Home
Fire Eats Home
Ground Eats Wood
Wood is Dirt
Dirt wants Seed

Black is the Backdrop of the Universe

When working against black, every dot is evident and every mark is meaningful. To me the series is about reduction, even before beginning.  Which marks are necessary and which marks are implied? I love to paint the cosmos in this way. Every dot is a galaxy. Every dash is an eon.

The Sun and Moon Series

These pale colored papers of Cerulean, Robins Egg and Blush, allow the transparencies of the sky, such as the motion of the clouds and the faces of the Deities, to be seen.  Using gouache and ink, I can draw with liquid lines, the silhouettes of pines, whom I love.  How better to conjure water than with another liquid.  Dots and lines of white gouache are capable to describe light on water.  All these things make it possible for me to relay the beauty of the land and water and calm the angst for a little while. All the paper is 22"x 32" and year created was 2017.

This group of work is from a series of ink and gouache drawings on large sheets of deeply colored paper. These are illustrations of dreams, or paring down of dreams into an image, then into a symbols. I have experienced these dreams during pivitol points of upheaval and change in my life.    Each dream is illustrated in 6-8 drawings and taped together, end to end and wound onto a scroll.  Then I  roll the drawings through a viewing window, in a device called a Crankie.  I accompany these scrolling drawings with songs, which I hope further illuminate the meanings.

"Liz Downing & Rupert Wondolowski spoke of mixing it up one night at the Fair brothers' Shakemore Festival. Then Liz somehow transformed Rupert's poetry into melody. The passing of fellow friend and a startling poet, Chris Toll, onto the astral plane filled them with an urgency to create an aural life raft upon which to float gently on the ravaging waves of time."

In my world of paper puppet making, these things are true;

To create a puppet is to make a character when that character didn't previously exist.  It is a very big endeavor and I know immediately if this new character is real or a copy or just plain lifeless.  A paper puppet must be able to be clearly read, like a symbol, but have a presence about them so to make you feel in their company, so to make you care about their story.

The backgrounds are home to sacred cabins and landscaped with sentient beings.

Puppet making is still new to me and I am figuring my way through.