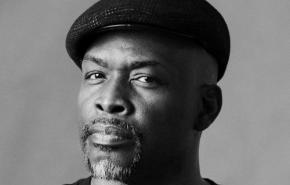 Larry “Poncho” Brown is a native of Baltimore, MD. He started his first business at the age of 17 as a signwriter and has been a full time artist ever since. Poncho received his Bachelors of Fine Arts Degree from the Maryland Institute College of Art, in Baltimore, MD. His art, both fine and commercial, has been published nationally in Art Trends, U.S. Art Gallery, Images, Upscale, Ebony, Ebony Man, Essence, and Jet Magazines. His work is also featured in the UCLA Fowler Museum of Cultural History... more
See 2021 $2,500 Baker Artist Award Winning Portfolio
View Larry Poncho's Resume

Positive imaging. In a world where the imaging of people of color has been exploitive, degrading, and even absent , I long to fill that void as an image maker. One of my crowning achievements as an artist has been my dedication to the documentation of African American social and cultural issues. I have created over 74 images to assist non-profit organizations and African American organizations with artistic documentation and fundraising opportunities. My focus has been to express my interest in positive imaging through afrocentric themes, and ethnocentric culture. These creations are a reflection of my personal values and pay homage to ongoing themes of unity, family, and spirituality. My intention is to create positive imagery that brings attention to the issues that concern our community by illustrating health topics which effect our community such as HIV and AIDS, breast cancer, sickle cell disease, black mental health, etc., to social issues regarding education, fatherlessness, endangered youth, family hardship, or homelessness. Always celebrating our diversity, encouraging unification, or recognizing perseverance in my subjects. See additional images below in Musical Interludes: "The Jazz Series"

Black Lives DO Matter. A current term that has the power to unify and divide. This black and white collage series brings light to the ugliness of racism and bigotry that we have witnessed in the past, and unfortunately to the present. Hard to believe that we are still divided in the 21st century as our country claims a path of diversity and inclusion. These images depict the pain, the struggle, and the perseverance of a people as they triumph over adversity through the subjects of African American civil rights, police brutality, black male identity, women's rights, the miseducation of our children, or image degradation at the hands of the media. It is my hope that they will open dialogue on the subject of self validation.  There is nothing more powerful than a black and white image. The past decade I began doing collage works again. Most are acrylic based mixed media collages on paper or canvas composed with civil rights periodicals from the 60's and 70's, articles, and newspaper features. The words draw you in closer. The newspaper symbolically represents all the topics we deal with day to day. I also use U.S. currency, lottery tickets, and book manuscripts. Plans are underway to extend this series to one day do a solo exhibition of the collection. "In between the contrast of black and white, unity can be found in the grays."-Larry Poncho Brown

Truly a soundtrack to the background of my studio life. I have a spiritual connection to all music,  but specifically jazz,  jazz contemporary, and blues. Musical subjects excite me, stimulate me, and spiritually immerse me while providing me an opportunity to appeal to diverse audiences with universal appeal. Many of my musical images have been commissioned as official posters in several  music festivals across the country which have garnered me many "Featured Artist" invitations. Let the music play!

Passport Inspiration: "Across the Diaspora Series"

Of African Descent. A portfolio of  larger works inspired by my travels to abroad to Senegal, Ghana, South Africa, and the Caribbean. These works are reflections dealing with spiritual and ancestral connections, as well as the middle passage and the impact of slave migrations to the Caribbean and Americas. Works are intentionally primitive in approach and graphically complex. I plan to extend this series, and organize an exhibition of the works in the countries I have traveled.

In the Studio: Experimentation and Exploration

I am an imagemaker. I DO take that responsibility very seriously. My sole purpose is to enlighten, inspire and uplift through my imagery. This portfolio shows the broad range of my image spectrum. I use all mediums wet or dry, oil or acrylic, pastel or graphite. I can do realism or abstraction. I love layering, texture and collage. I love to experiment with mixing mediums. My artistic approach is rarely traditional.  Next stop...Afrofuturism!

Poster Art Is Alive and Well! This is a portfolio of commissioned commemorative poster projects. Documenting the efforts of community cultural festivals and events has become a central focus for me as an artist over the past years. Many of these commemoratives served as a visual archive of the missions of these organizations. This is a cross section of commemoratives dating back to the mid 80's into the new millennium. This overview shows an evolution in technique and stylization.  Most of them have become collectibles.

Behind the Lens: "Standards of Beauty Series"

A journey behind the lens with Poncho. Studio photography has always been one of my first loves since my college years at MICA. Comprised of a portfolio of creative women of color, who are NOT professional models, or have even been considered as models, and in most cases would rather not be in front of the camera. The series is celebration of black beauty, which challenges the notion of standards of beauty in America. All of the subjects selected  are all artists and craftswomen.

In my core, I am an artist advocate. I am completely inspired by the wealth of creative talent in Baltimore, specifically within the African American community.  How do I recognize an underserved, unsupported, unrecognized art community?  This became my personal mission. While the art community in Baltimore has grown in the past decade, I believe a cross section of our cities creatives are being excluded. I embarked on a journey to do something rather than just complain by partnering with two community spaces to curate two exhibitions. One of living artists in Baltimore "Baltimore's Unsung", and the other of deceased artists from Baltimore "Baltimore MASTERS Art of the Ancestors". Both drew hundreds of supporters who have longed to see artists of color unify.

Baltimore has a rich legacy of visual artist whose contributions represent the very fabric of the city. These artists may have national and/or international acclaim, yet they often go unrecognized within their own community. Their works decorate our great city, however only a few local galleries validate their contributions. In addition local institutions rarely utilize these artists wealth of experience and knowledge. They often face the continued challenges of biased selection in several local art exhibitions and festivals. The Unsung exhibit will feature the artist, designers, crafts creators and entrepreneurs that actively represent the Baltimore art scene. The exhibition is a reunion of sorts of these artisans that evolved during the development of the city. This will be a rare gathering of visionary and dynamic creators, who use art to heal, uplift and empower. Photography by Anderson Ward.

Second, I organized and curated an exhibition of "DECEASED" Baltimore Artists that have joined the ancestors.

Baltimore has a rich legacy of visual artists. Their contributions are the very fabric of Baltimore City. Many of these artists acquired national and international acclaim, yet often have mostly gone unrecognized within the art community. Only a few Local galleries have validated their contributions, and most local institutions have yet to acknowledge their contributions.

Bringing artists of color together is a task that has many challenges. Artists are mostly individual in their spiritual and physical existance, so imagine the energy generated by pulling them together. As part of my artist advocacy agenda, I organized a historic photograph of the African American visual artists of Baltimore on the steps of the Baltimore Museum of Art.  Titled "A Great Day In Baltimore" inspired by "A Great Day In Harlem" and "A Great Day In Chicago". Photographed by Lawrence A. Randall

A true Who's Who of the Baltimore art scene, this was the largest assemblage of professional Baltimore African American Artists.

In the world of art there is often a stigma and/or issues associated with supporting local artists; particularly artist of color. Baltimore has a rich legacy of visual artist whose contributions represent the very fabric of the city. These artists may have national and/or international acclaim, yet they often go unrecognized within their own community. Their works decorate our great city, however only a few local galleries validate their contributions. In addition local institutions rarely utilize these artists wealth of experience and knowledge. They often face the continued challenges of biased selection in several local art exhibitions and festivals. B'more ArtScene featured the artists, and Artrepreneurs that actively represent the Baltimore art scene. This gathering is a reunion of sorts for these artisans that evolved during the development of the city. This will be a rare gathering of visionary and dynamic creators, who use art to heal, uplift and empower.

Hand Made. Artists 2 Africa has been a wonderful experience for the many that have participated. I have been organizing artisan tours to Africa namely Senegal and Ghana for artistic tours beyond the normal tourist experience. Imagine a trip to Africa with acclaimed African American artists structured for cultural exchanges with African artisans.  Our first trip was to Senegal and the Gambia, our second was to Ghana. These tours were designed exclusively for artists and art lovers. Everything from sand painting, kente cloth weaving, wood carving, lost wax process, textile stamping, beadwork, etc.  We travel into the villages where creating art is a way of life. So if you think you would love to experience an historical pilgrimage and artistic cultural exchange in the motherland...JOIN US!