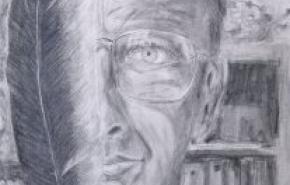 I was born in Baltimore and began to draw seriously around the age of 14, when I became enamored by the calligraphy of Old English manuscripts. I moved on to studying  Japanese painting  in my teen years, then widened my work as an adult. Growing up, my father and grandfather taught me how to handle tools and materials, reflected now in assemblage. I have drawn, painted, and made things virtually my whole life, but I wanted more rigor. So I told my children that when they graduated from... more

The relationship of wealth, not to mention freedom, to whiteness is neither accidental nor individual. Governments at all levels, financial institutions, landlords, and real estate firms have created systems to maintain the disparity.
Several cities enacted racially restrictive ordinances in the early 1900’s, led by Baltimore in 1910.
Then, during the Depression, the federal government made maps of over 150 urban centers, coding the "financial security” of neighborhoods. The lowest-rated areas were in red, originating the term “redlining." But the map areas weren’t just based on financial experience. Race and ethnic origin were explicit factors.
Banks charged higher interest for loans and mortgages in redlined areas. While rates stayed high, even when overt housing discrimination became illegal, housing value fell, leaving marginalized people, primarily people of color, unable to move, improve their housing, or accumulate wealth, only one way to go: further into the red.
Landlords who do not want to invest in deteriorating units, predatory lenders, hiring discrimination, neighborhood covenants, informal home sales agreements, and real estate and college admission policies that made even the G.I. Bill inaccessible to minorities have forced the relative wealth of people in redlined areas to decline. Renters and owners, underwater financially, are stuck.
Even after 80 years, Baltimore city, the City Paper, and others have published maps of incarceration, failure to pass the MD High School Assessments, graduation rates, life expectancy, unemployment, and so forth. You can overlay them on the 1937 map of Baltimore and the worst areas almost exactly correspond to the red and yellow (“declining”) areas in the 1937 “Security” map.
The work features gears and clocks to symbolize the systems and their continuation. You will find maps and posters, along with sections of the original ordinances and covenants. In front, a man on his knees, hands behind his back, and in back, flames.

Found object assemblages: matchboxes. objects, gold leaf, paper. This is an ongoing project, a gift for my son, who is also an artist. I produce one or two of these matchbox assemblages a year; there are currently 18 matchboxes. Sizes vary slightly; approx 1" x 2" x 1/2" each. They are named descriptively for the outside of the boxes, but that is a convenience since there are so many of them. The insides form their own compositions.

Assemblage: Oil on wood, wire, objects. 14"h x 20"w x 6"d. As if the Holocaust weren't bad enough, I envisioned a connection between the prisoner and his dream of children, which turned out to be another nightmare, that of child soldiers in our time. Doing the research was heartbreaking.

Assemblage: oil on wood, gold leaf, thread, objects. 13"h x 10"w x 4"d. This started off as a composition based on the old cigar press. By the time I was finished, the spheres, gears, and incised blue lines and circles seemed to refer to something cosmological, maybe from time before modern cosmology.

Assemblage: Oil on wood, acrylic, photographs, objects. 20"h x 16"w x 2"d.
This assemblage a narrative, but it is open, so you can have your own story or questions. 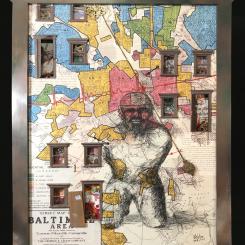 Man in the Moon side 3.JPG 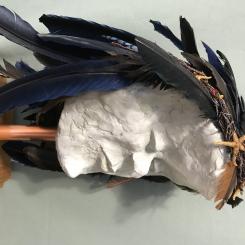